In the good old BookLikes days (when they really still were good days), we used to have a Discworld group and associated book club, which had committed to reading the entire series in publication order, by way of bimonthly reads.  We had gotten as far as Guards! Guards! by the time the site went down the drain; and what with the subsequent reorganization and everything, this is one of the projects that got temporarily shelved.  But I always meant to get back to it, and what better occasion to do so than in the month of Sir Terry’s birthday?  (I’ve also created, incidentally, a summary project page on this blog: Narrativium: Where the Falling Angel Meets the Rising Ape — for an explanation of the name, see HERE).

Eric sees a reappearance of Rincewind, Pratchett’s first Discworld wizard, who seemed to have vanished to kingdom come at the end of Sourcery, but is conjured back into corporeality by the eponymous aspiring teenage magician.  (Not that Eric actually wanted to achieve precisely this result, but it’s what he — and we — are settled with.)  In fulfillment of the standard three wishes that Eric believes he is entitled to in an encounter with a magical being, Rincewind and Eric travel to the Discworld version of the Mayas, further back to the the siege of Troy and even as far back as the beginning of time, as well as down into the pits of hell; and along the way, we get Pratchett’s first Discworld-infused digs at religion, gods, creators, and various kinds of underworlds (with particular emphasis on that of Greek mythology and Dante’s Inferno by way of Brueghel and Bosch).

Sir Terry was constitutionally incapable of writing a thoroughly bad book, and bits and pieces of this are still supremely enjoyable — but I’m still glad that for once he limited himself to little more than novella length: For one thing, there are recurring Discworld characters that I like better than Rincewind, Eric is about as big a PITA as a teenage boy can be, and the Luggage was funny in the first two books, but it has seen its day and just maybe should consider growing its many little legs into some solidly sapient roots.  And for another thing, parts of this book had a downright feel as if Pratchett had more or less been phoning it in — they were considerably less developed than the previous books’ settings, characters, and plot sequences.  In fact, I couldn’t shake the impression that having once decided to revive Rincewind after all (along with the associated format of an unwizardly wizard acting as a sort of Discworld tour guide to another character, as first established in The Colour of Magic and The Light Fantastic), at some point he just ran out of steam and decided to call it a day … which, as far as I was concerned, was just as well. 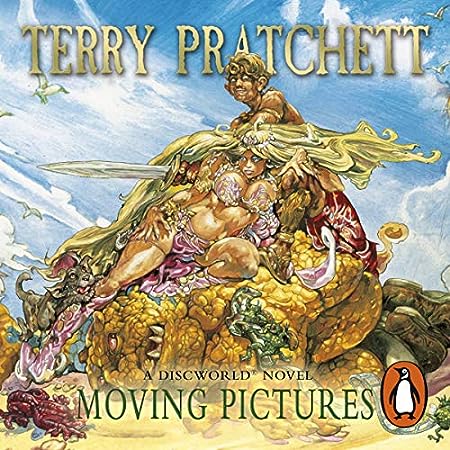 Given my slight disenchantment with Eric, and the fact that two BookLikes friends also read Moving Pictures in April and didn’t like it one bit, I was actually a tiny bit apprehensive about this book, which, as the title implies, is Pratchett’s take-down of Tinseltown.  Well, I don’t know to what extent it made a difference that I’ve actually seen the orinal as up, close and personal as I could ever have cared to; in any event, I enjoyed this Discworld installment enormously, to the point of not even caring about its plot (although that hangs together decidedly better than the one of Eric, too): Basically, Moving Pictures is one huge exercise in “spot the Hollywood trope” (with a large side order of “spot the movie blockbuster pun”), and you either get bored with it really fast or you’ll tumble from one page to the next (or from one minute of the audiobook to the next) falling from one burst of laughter to another, because the caricature is so incredibly on point, down to the most minute detail.  For me, fortunately the latter was the case.

Also, though there’s never really any question that the various Discworld subseries are all set in the same universe (well, duh) and more or less contemporaneously — though the first five books equally clearly predate the time period we’re entering with Wyrd Sisters — I was happy to re-encounter some characters that I first met in later books during my initially somewhat less systematic Discworld rambles, such as Angua’s friend-to-be, Gaspode the talking dog, and the troll and watch-man-to-be Detritus.  (And come on, you just have to love the troll version of courting.  Or would that be trolling …?) 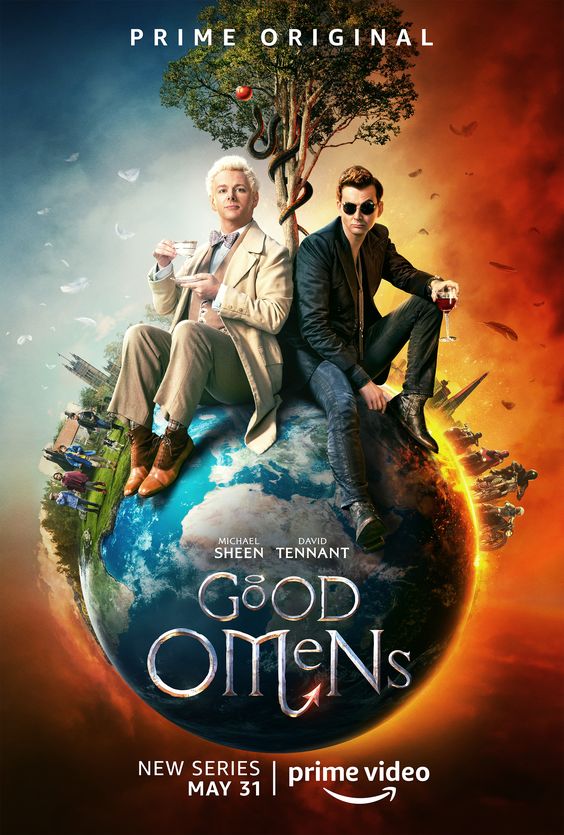 By way of a companion enjoyment to the two Discworld books, I indulged in a minor binge on the 2019 screen adaptation of Terry Pratchett’s and Neil Gaiman’s gloriously funny Good Omens.  I reviewed it HERE immediately after its release, and every single word of those comments still stands — perhaps even more so — two years later and after having revisited the production several times in the interim (as predicted, too, in my original comments).  But of course it’s just the mix of the source material and the screen version’s glossy sheen that makes for this production’s chewing gum entertainment quality, and there are definitely worse ways to while away an evening or three.

One thought on “Terry Pratchett: Eric & Moving Pictures (and a Reprise of the 2019 Good Omens Screen Adaptation)”