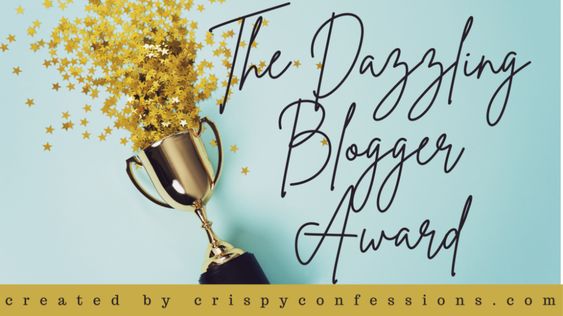 The Dazzling Blogger Award, designed by Helen at  Crispy Confessions, recognizes bloggers who  excel in at least one major area of blogging: writing skills, engagement, social media marketing, or content.

It was a huge surprise when Steve from A London Miscellany informed me the other day that he’d nominated me for this award.  Steve, thank you so much; I’m truly honored!

Steve is a Londoner through and through; if you have even the slightest interest in his home city — off the tourist track, history, curios, et al. — do yourselves a favor and check out his blog and the associated website, also called A London Miscellany.  Steve is extremely knowledgeable and simply great to chat with.  It may be a while until I am next able to travel to London, but I’ve promised myself (and him) that whenever I next make it there, I’ll be sure to include one of his tours — the real difficulty, I suspect, is going to be selecting which one to pick.  Even if you never make it to London, however, you’ll find plenty of information, well-presented and well-researched, in each of his blog posts; from the history and modern life of the various boroughs and neighborhoods to the history of specific buildings or even individual features of their facades, to parks, the Thames, historical personnages from the Middle Ages to the modern day, trade and leisure organizations and institutions, and everything else that makes London tick.  Steve’s answers to the questions he himself was asked in the context of this award include “London tour guide” as his dream job and “1893 Ordinance Survey map of London, Spike Milligan’s War diaries, Fullers London Pride Beer” as the three items he’d take to a desert island.  Need I say more?

Now, on to the rules of this award:

My Answers to Steve’s Questions

What do you have on your bedside table at the moment?

Several stacks of books (some read, some not yet read), my alarm clock, a lens cloth and cleaning fluid for my glasses, my cell phone (at night), and an  assortment of items that started life as theatre, museum or travel tickets or similar odd scraps of paper but have since been redesignated as bookmarks: 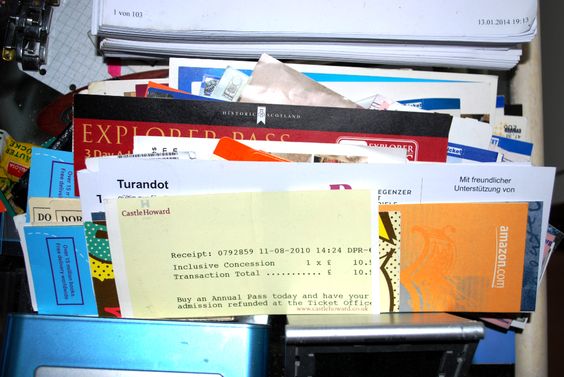 Have you ever experienced a paranormal phenomenon?

If I did, I wasn’t aware of it, because I don’t believe in them.  (Religion is a different matter, but I don’t expect physical manifestations there, either.)

If you could change you christian name, what would it be?

I wouldn’t want to change it — it’s part of who I am (I don’t even like to have it shortened into a nickname).  The fact that I’m using an alias as my online / blogging screen name has more to do with online privacy considerations and the fact that I had to get rid of a hacker once while I was still using my real name as my online handle.  Even my screen name has been the same for the past two decades now, though.

Card, generally.  Cash only for comparatively small amounts, up to approximately € 20.00 (or the equivalent in other currencies).

Favourite city in the world?

Oh, lordy.  That’s exactly the kind of question that I can never answer with a single word or name!

I love all three cities that I call or have called home long enough to deserve that name: Bonn, Berlin, and Los Angeles (or rather, Santa Monica), CA.

Do you still listen to the same music that you did when you were 17 (and why)?

Largely, yes.  I was a teenager when what’s today called “classic rock” was the latest thing; and four bands that I particularly loved back then are still around, or of those that have since dissolved, their lead singers are still around at least — in no particular order: The Eagles, Dire Straits / Mark Knopfler, Fleetwood Mac (esp. Stevie Nicks), and The Police / Sting.

At the same time, my mom also passed on to me her love of opera — and classical music generally — at an early age, and that still forms a large part of my listening habits as well.  (I have since moved on from Mozart and Verdi to other composers, though.)

Phew.  Possibly my aunt’s face leaning over my crib when I was a baby, though I can’t be sure about that — I just knew, when I “officially” met her for the first time at age four (she and her family had been living in the U.S. until then), that I had seen her face before, and I had that vague image in my head of looking up while lying in my crib and her face suddenly appearing above me and looking down.  Why this image stuck in my memory I can’t say; I have an equally vague sense that somehow the grown-ups seemed to convey that this was an important moment — this was in fact the aunt who, I later learned, was to become my godmother — and I might have found it puzzling that if this person was to be important to me, she didn’t reappear on a regular basis, as all the other important people did.  (And by the time she and her family moved back to Germany, I had entirely forgotten about ever “meeting” her before).

Have fun, everybody, and thanks again to Steve for nominating me!