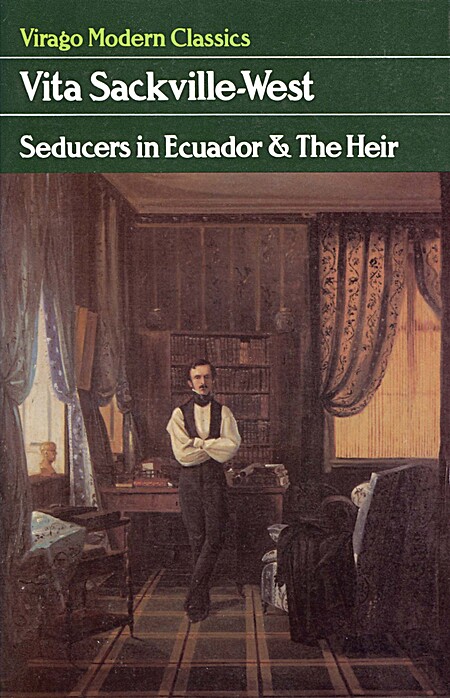 Two novellas from 1922 (The Heir) and 1924 (Seducers in Ecuador) that both deal with transformative experiences — and I suppose that is why they are typically published together –; however, in tone and setting they couldn’t be any more different.

Seducers in Ecuador was the first piece of fiction writing by Vita Sackville-West published by Leonard and Virginia Woolf’s Hogarth Press. Some 1 1/2 after they had first met, Woolf asked Sackville-West to write a story for them to publish, and Vita complied during a walking tour in the Dolomites with her husband, Harold Nicolson. In a July 16 letter to Virginia Woolf, she commented:

“I hope that no one has ever yet, or ever will, throw down a glove I was not ready to pick up. You asked me to write a story for you. On the peaks of mountains, and beside green lakes, I am writing it for you. I shut my eyes to the blue of gentians, to the coral of androsace; I shut my ears to the brawling rivers; I shut my nose to the scent of pines; I concentrate on my story. Perhaps you will be the Polite Publisher, and I shall get my story back — ‘The Hogarth Press regrets that the accompanying manuscript,’ etc — or whatever your formula may be. Still I shall remain without resentments. The peaks and the green lakes and the challenge will have made it worthwhile, and to you alone shall it be dedicated.”

Woolf, however much personally taken with the author, was honest enough to comment one the manuscript, once she had received it in September, that she liked it a great deal, but that she thought it was not perfect:

“… being full of a particular kind of interest which I daresay has something to do with its being the sort of thing I should like to write myself. I don’t know whether this fact should make you discount my praises, but I’m certain that you have done something much more interesting (to me at least) than you’ve yet done. It is not, of course, altogether thrust through; I think it could be tightened up, aimed straighter, but there is nothing to spoilt it in this. This is all quite sincere, though not well expressed.”

(Way to damn with lavish praise there, Virginia … even if the addressee herself hardly seems to have minded!)

Presumably the tightening-up suggested by Woolf took place prior to publication; in any event, by early October the book was available in print and Woolf invited Sackville-West to come to London and collect her copy.

Sackville-West’s comments on the story’s genesis (or the circumstances of its creation) in her letter to Woolf are illuminating in their own right, as the novella is all about color and light; or rather, the distorting effect of seeing the world only through tinted sunglasses instead of exposing one’s eyes to the reality of its daylight colors. Seducers in Ecuador concerns a man who, heretofore not having found anything in life extraordinary or even noteworthy, during an impromptu Mediterranean cruise suddenly begins to find life much more interesting as seen through the sheltering (and distorting) shades of the sunglasses that he first puts on to protect his eyes from the merciless glare of the Egyptian sun. This leads him to a whole series of decisions and actions he would never have contemplated before; including what we’d today call the mercy killing of a millionaire acquaintance suffering from an incurable disease. The fact that, out of gratitude, the millionaire has made him his heir (while failing to mention in his will, or in another suitable document, his own request for a quick rather than a protracted and painful death) eventually leads to the protagonist’s being tried for murder, and it is only when, during his trial, his precious sunglasses are taken away from him again, that he is forced to contemplate his recent course of action and its consequences in the cold hard light of day.

(The above is not a spoiler, incidentally; the author herself mentions it at the very beginning of the novella, and acerbically comments:

“The practised reader will have observed by now that the element of surprise is not to be looked for in this story.”)

And it is this technique of telling the story almost in reverse (while of course brilliantly still keeping it interesting nevertheless), as well as Sackville-West’s use of colors and ight, that presumably Virginia Woolf liked enough to declare it “the sort of thing” she’d like to write herself: taken together, it gives the story a very modern feel, and in a way there seems to be quite a bit of foreshadowing of Camus’s The Stranger, albeit with an unmistakably English touch. (Though I have to say that, even if Camus’s novel is by and large the more radical and more brilliant work, I still vastly prefer Sackville-West’s narrative voice.) — The novella’s title, incidentally, is an allusion to one particular piece of presumed fictional life story that motivates the protagonist towards the other crucial decision that will eventually prove his downfall.

The Heir, by contrast, concerns a transformative experience of a much more positive nature. It, too, focuses on a gentleman who has so far led an entirely drab and nondescript life, and who suddenly inherits a lovely Tudor mansion that has been in his family for centuries, has (under its previous owner, the protagonist’s dictatorial and old-fashioned aunt) bypassed any attempt of modernization, and is — together with the appurtenant land and farm buildings — mortgaged up to the hilt, so an auction of the building, its furnishings, and its grounds (lot by lot) seems to be the only solution available to save the estate from drowning in debt and bringing the heir himself down in the process. But while the attorney in charge of executing the will sets out to pursue just this course in a spirit of relentless, unsentimental materialism, the heir himself falls in love, more and more, with the house, its enchanted garden, and the hardworking, honest countryfolk farming the lands; and while he has no use for the concept of acting as squire or lord of the manor to anybody, least of all these farmers he has come to like so much, the notion of having to let go of the charming house itself is increasingly beginning to tear him apart, until it becomes almost a life-or-death conflict.

The Heir may not be quite as radically modern a piece of writing as Seducers in Ecuador — it is much more a child of its time, and it is also very obviously the work of an author who, having grown up at Knole, has a profound appreciation of the value of historic buildings and their furnishings in a cultural, aesthetic and emotional sense, in fact, in every sense BUT a monetary one –, yet, I very much like its much greater empathy with the protagonist than that which Sackville-West displays in Seducers in Ecuador, and I also very much like its upbeat, optimistic undercurrent: while you do see how the conflict what to do about the house is progressively tearing the protagonist apart, you always feel that there is a chance he may come up with a solution after all.

Also, what instantly struck me when reading The Heir was that it is almost the reverse sort of story from All Passion Spent: In both stories, a death presents the protagonist with unhoped-for possibilities, but while the earlier work’s eponymous Heir moves towards embracing the ownership of a beautiful, ancient piece of property (however debt-laden), the heroine of All Passion Spent (1931) takes advantage of her husband’s death to free herself of all the trappings of aristocracy (house, clothes, jewelry, not to mention status) to spend the final years of her life enjoying the independence she has been longing to regain since the day of her (family-imposed) wedding.

Although Seducers in Ecuador and The Heir are frequently published together (and I’m reviewing them as part of such a joint publication), I didn’t, incidentally, actually read them in this form: Seducers in Ecuador is part of the anthology of Vita Sackville-West’s Selected Writings that I acquired in honor of her status as a (M)DWS author in residence, and I had initially been planning to read and review it separately, but when I saw that it is much easier to come by (for purchase or review purposes) as one half of a joint publication with The Heir, I quickly sought out that second novella online (it’s copyright-free and available, inter alia, on Project Gutenberg).

One thought on “Vita Sackville-West: Seducers in Ecuador & The Heir”