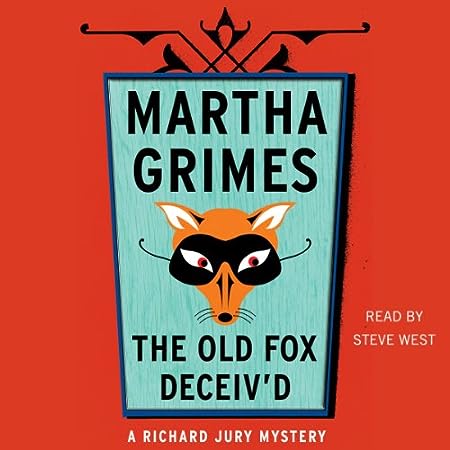 The Old Fox Deceiv’d was the first-ever book by Martha Grimes that I read, and whatever other details of its contents I subsequently forgot, it opens with an image that instantly grabbed me and stayed in my mind as vividly as when I first read it decades ago, and it’s in fact the one pictured on the Onyx paperback (above left), too:

“She came out of the fog, her face painted half-white, half-black, walking down Grape Lane.  It was early January and the sea-roke drove in from the east, turning the cobbled street into a smoky tunnel that curved down to the water. […]

The wind billowed her black cape, which settled again round her ankles in an eddying wave.  She wore a white satin shirt and white satin trousers stuffed into high-heeled black boots.  The click of the heels on the wet stones was the only sound except for the dry gah-gah of the gulls. […] The narrow street came right up to the cottage doors and black iron bootscrapers. […]

When she came to the iron gates of the Angel steps, she stopped.  The wide stair was on her left and connected Grape Lane and Scroop Street above with Our Lady of the Veil, the church at the top of the village.  She unlatched the gates and walked up, a long walk to a small landing where a bench served as a resting place. […] It was Twelfth Night.”

The place where this scene is set is the fictional, but quintessentially “Yorkshire” fishing village of Rackmoor (inspired by Staithes north of Whitby, where Grimes stayed during her research for this novel).  The date, as stated in the above quote, is Twelfth Night.  “She” is, as we will quickly learn, a young woman who has come to Rackmoor Old House, the residence of Colonel Sir Titus Crael, M.P., Master of Foxhounds, and one of Yorkshire’s richest citizens, claiming to be his resurrected and returned beloved ward, who disappeared at age 18, almost half her present lifetime ago — sort of a latter day female Martin Guerre.  One of the questions that Inspector Jury, sent to Yorkshire when “she” is found murdered, will of course have to answer is whether that claim of hers is correct: Sir Titus’s son vehemently rejects the idea; Sir Titus equally vehemently would have loved to believe it.  Oh, and it so happens that just when Jury’s job takes him to Old House, Melrose Plant has also been invited there — Grimes would later have Jury expressly call on Melrose to help with certain aspects his investigations, but in some of the earlier books she relies on coincidence to throw them together, which of course isn’t the most elegant way of going about things if it happens repeatedly; but you essentially have to lump this one, as it’s clear from book 1 that they are the series’s joint protagonists, so if you don’t want to get annoyed by their chance meetings near the scene of a crime over and over again, you have no option but to go with the flow.

In terms of this book’s plot development, Grimes doesn’t limit things to the Martin Guerre angle by far, and Jury’s and Melrose Plant’s investigation even takes them back to London for a while, but while that part of the book does offer up a number of colorful scenes and encounters as well, it is ultimately Rackmoor first, last and everywhere that controls this book’s atmosphere.  Of course there’s the obligatory (de-facto) orphan, too, and he plays a considerably bigger role here than do the Doubles in The Man With a Load of Mischief (he also won’t remain the only one who owns, or is best friends with a dog).  Upon rereading the book, it struck me that some of the clues here are a bit more obvious than in the series’s first book, but ultimately none of this matters — I think it is fair to say that the opening scene will continue to overshadow everything else whenever I’m thinking about this particular novel.

I’m not planning to revisit the entire series, but this reread has whetted my appetite for a few more of the earlier books.  Far and away the most atmospheric of these are set in winter, either shortly before or after Christmas; and I may well end up including one or more of them (particularly another one of my very early favorites, Jerusalem Inn) in this year’s holiday reading. 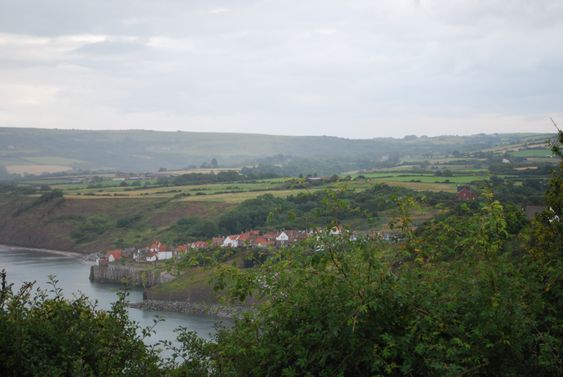 Robin Hood’s Bay (south of Whitby, Yorkshire), another fishing — and formerly smuggling — village on which Rackmoor could easily have been based. (photo mine)

One thought on “Martha Grimes: The Old Fox Deceiv’d”