Martha Grimes: The Man With a Load of Mischief 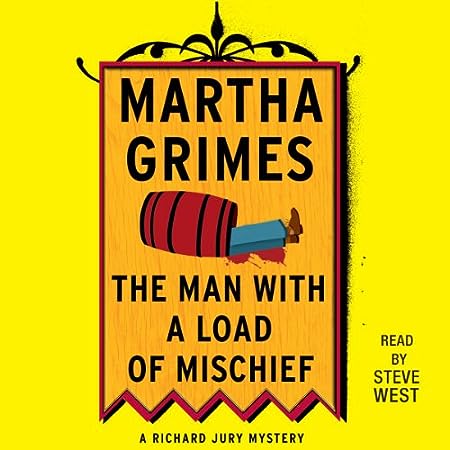 Until not so very long ago, Martha Grimes’s Richard Jury series used to be one of my standard “go to” mystery series; it had everything that I’m looking for: well-constructed puzzles, great characters and settings, snappy dialogue, and plenty of sardonic humor.  (Also, if you thought that Elizabeth George was the first American novelist to set a mystery series in Britain and get away with it, think again: Grimes was there before her, by almost a full decade.)  Somewhere along the way, though, something got lost; and while Grimes — I think — still keeps plugging away at the adventures of Richard Jury, Melrose Plant and their manifold cohorts, I have stopped reading her books: they’re just not working for me anymore.  For her birthday, though, I decided to go back to the very beginning and revisit books nos. 1 and 2 of the series, which have always been among my particular favorites and still are after this reread.

Grimes’s Inspector Jury series is one of those book series whose titles all follow a particular theme; in this instance, it’s unusual pub names. No “Crown,” “Anchor,” or “Queen’s Head” here; every novel features a pub whose name is identical with the novel’s title (as well quite possibly, also a few other idiosyncratically-named pubs); and the pub’s name, in turn, usually contains a clue for the mystery’s solution — or at least, it does so in the series’s early installments.  In this first book, we meet not only Inspector Richard Jury and his chronically hypochondriac Sergeant Wiggins, but also half the population of Long Piddleton, aka “Long Pidd” (Northamptonshire, or Northants for short), where Jury is sent when two dead bodies are found at or near one of the local pubs (you guessed it, the one the book is named for): first and foremost, we also meet Melrose Plant (moneyed, green-eyed Francophile, drinker of Old Peculier, record-speed-Times-crossword-solver with a sideline occupation as a Professor of French literature), who would be the local squire if he hadn’t resigned his hereditary title as the eighth Earl of Caverness for reasons known only to himself, and Melrose’s American aunt by marriage, Agatha (insatiable guzzler of scones and incorrigible mispronouncer of non-intuitive English names; torn between the regret that her nephew-in-law no longer holds an earldom and triumph over the fact that, as his uncle’s widow and self-styled Lady Ardry, she now conceivably outranks him; with her beady eye always firmly on the riches displayed at his manor house of Ardry End, which to her infinite chagrin she is not destined ever to own).  Like some of the other denizens of Long Pidd, who are all destined to become recurring characters in the series, Melrose Plant and Aunt Agatha are regulars not at the Man With a Load of Mischief but at its rival establishment, the Jack and Hammer, from where they merrily follow the investigation; or rather, everybody else looks on, while Melrose seizes the opportunity to escape the boredom of a rural winter with both hands, and Agatha enviously but futilely tries to insert herself into Jury’s and Wiggins’s job in turn.  Another recurring feature of the series are lost, lonely, or real or de-facto orphaned children (mostly boys), with whom Jury — in contrast to Melrose Plant — instantly establishes a connection: Jury is a war orphan himself; we later learn that he lost his mother in the London Blitz, and he has spent part of a childhood in an orphanage.  In this first novel, the children in question are the “Doubles” (so named because they’re both called James, or at least that’s what they claim); they are not quite as prominent as some of the children in the subsequent books, but there’s hardly a Jury novel without them.

As the novel’s (and the pub’s) title implies, there is quite a bit of back story to the murders; and you have keep your eyes open in order not to miss the clues that Grimes sprinkles throughout.  The first two deaths are followed by several others, to the point that eventually Jury not only has to divide his time between his police work and keeping Agatha at bay, but on top of everything he is eventually also saddled with his equally stupid and irascible boss at Scotland Yard (aptly named Racer), who shows up in Long Pidd in time for the discovery of the final body and, when Jury shortly thereafter collars the killer, all but steals the Inspector’s thunder in the press.

Grimes is no stranger to the deliberate use of cliché in characterization; this isn’t only true for Racer but also, e.g., for Long Pidd’s resident antiquarian, Marshall Trueblood, who is flamboyantly gay (he insists the flamboyance is only an act put on because his customers expect it, but it does carry over into his behavior when among friends), as well as for a number of other eccentric characters that will be introduced later in the series.  This is balanced off, however, in the early books at least, by her genuinely sensitive portrayal of Jury’s London neighbor Mrs. Wasserman, a Jewish WWII survivor, whom her life experience has made distrustful of everyone and everything, and who finds great comfort in living in the same building as a policeman with the Met.  So, a few 1980s (in)sensibilities do crop up, but I nevertheless still love this series — and the earlier books, in fact, much more than the later ones, where Grimes sacrifices part of the snappiness of the earlier books’ dialogue and characterization for the sake of political correctness.

One thought on “Martha Grimes: The Man With a Load of Mischief”