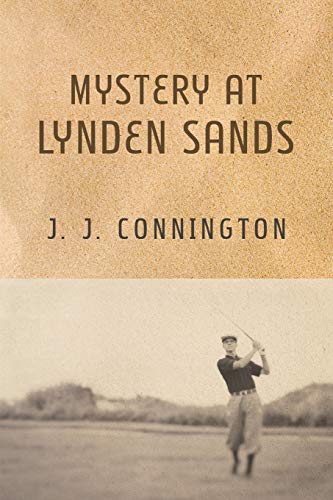 The Dreidel pick for my first book of 2021 from the 2020 edition of Festive Tasks, and in many ways, things only went uphill from here.  It’s not a bad book, mind, just not entirely my cup of tea.  I had wanted to read this, on the one hand, because (as I’ve learned from Martin Edwards’s nonfiction books on the era) Connington was one of the heavyweights of the Golden Age mystery arena; on the other hand, because I had been unsettled by parts of Connington’s Nordenholt’s Million, which starts out with a breathtakingly prescient doomsday scenario (and, though ending with a bit more whimper than bang, still manages further bits of prescience up to the very end), but which also contains seriously jarring racist and misogynistic passages in between.  Mystery at Lynden Sands is supposed to be one of the best books in Connington’s Sir Clinton Driffield series, so it looked like a good choice to validate either point; and this, it definitely turned out to be.

Now, as a mystery, this book is solidly in the “plodding / humdrum detective” tradition of Freeman Wills Crofts‘s Inspector French series and John Bude‘s mysteries; i.e., a book which on the one hand scrupulously plays fair with the reader, but on the other hand — and as a result of the author’s desire to place the reader on exactly the same footing as the fictional detective by laying out the path to each and every clue precisely as it is travelled by the detective (maps and all) — more than just occasionally sacrifices suspense for detail.  The more I delve into the world of Golden Age mysteries, such as it is reemerging in the recent wave of republications, the more I find that this is not really my cup of tea.  I enjoy trying to solve the mystery while I’m reading it as much as the next person (I wouldn’t read mysteries if I didn’t enjoy this aspect to begin with), but one of the main reasons why I am a fan of the so-called Queens of Crime (Agatha Christie, Dorothy L. Sayers, Ngaio Marsh, etc.) is that they squarely place the emphasis on the psychology of their characters (as well as, frequently, the settings of their books): i.e., they don’t just serve up a dazzling mystery with plenty of red herrings along with well-hidden genuine clues, their books have an added element above and beyond the mystery element, taken straight from literary fiction, which also translates into the mystery in that its solution likewise takes the various characters’ psychology — and the psychology of the crime committed — into account (and similarly, every so often, the psychological particularities of the locus delicti).  Connington does a bit of this here, too, but rather tentatively and by far not profoundly enough to be likely to make me a fan.

Moreover, his lead detective, Sir Clinton Driffield, is a Chief Constable, i.e., someone who is way above and beyond the daily investigative grind, and who, in every single book, needs a special “hook” to be called into the investigation to begin with.  Even if (like here) in the end he generously lets the inspector formally in charge of the case have all the credit for solving it, this only ends up smacking of promoting someone beyond their actual abilities — not least because this particular inspector does blunder rather badly and, early on, gets fixated on a theory of the crime that is neither fully in line with the available clues nor with the psychology of the persons he considers his chief suspects.  In addition to working alongside the inspector formally in charge, Driffield also has his very own Watson / Hastings figure, Squire Wendover, and while the good Squire certainly does have his fair share of Watson-cum-Hastings moments, I was rooting for him all the way, because he had a firm grip on the psychology of the thing and was, in fact, proven right in the end.

On the plus side, though, I am happy to report that the book features several strong and (in one case ultimately, in another case, from the outset) sympathetically-painted women characters — plus another woman who, though in the main stupid and quarrelsome, at least provides some of the major clues — so unless I should come across another example of blatant misogyny, for the time being I’m willing to absolve Connington of that particular charge — as well as, though the evidence is slimmer on that point, the charge of racism; at least vis-à-vis Britain’s continental European neighbors.

I have one more book by Connington on my TBR (The Ha-Ha Case), which I think will allow me to assess Connington’s views over time a bit more fully (Nordenholt’s Million was published in 1923, Mystery at Lynden Sands in 1928, and The Ha-Ha Case in 1934) — as well as his approach to mystery writing as such — but unless something of a truly earthshattering nature happens, I think after that third book I’ll be done with Connington, at least as far as his full-length mystery novels are concerned.   (The odd short story of his tends to show up in one Golden Age mystery anthology or another, and by and large I rather like his short stories, where he doesn’t have quite as much space to lay out the minutiae of the investigation, while still presenting an engaging puzzle.)