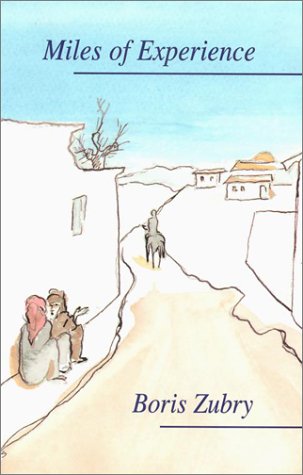 Diamonds in the Rough

I often wonder: How is it that there is a lyrical quality to the works of every Russian writer, unmatched by those of any other provenance with the exception of the Irish? Oh, I am aware that Boris Zubry has been living in the U.S. for close on four decades and has been an American citizen for almost as long. But he was born in Russia and quite obviously raised on a lavish supply of that country’s rich literary stock; and also quite obviously he has ingested enough of that fare to feel a desire to find his own place in the same literary tradition, somewhere between the works of Alexander Pushkin, Anton Chekhov and Ilya Ilf/Yevgenyi Petrov’s “Twelve Chairs,” with a dose of Jewish satirist Ephraim Kishon thrown in for good measure.

“Miles of Experience” is Zubry’s second book; a collection of stories and stream-of-conscience-style essays set in the Soviet Union of the author’s youth, in Saudi Arabia, the U.S. and in WWII Poland and Germany. Introducing each entry by a short poem and at his best when writing from a first-person perspective, describing life’s small, simple things – pleasures and disappointments, happiness and horror alike – Zubry takes the reader on a trip back in time and space, to places he has seen and experiences he has made; never shying from speaking his mind: direct, unapologetic, sometimes jarred, and not afraid of controversy. You won’t always find yourself agreeing with him; but if nothing else, you will be incited to formulate your own position.

The book opens with “Ali,” the touching account of an Arab shopkeeper’s young son who, raised in a traditional environment, is suddenly exposed to a group of rich city dwellers: an encounter that his simple upbringing leaves him ill-equipped to deal with.

The second story, “Cannon,” takes the reader to Portland, Oregon, where a friend of the narrator’s acquires a real cannon at an antiques fair and places it into his house’s front yard – with unexpected consequences.

“Crickets” (my personal favorite) is a story about the lost innocence of childhood, about a magical summer vacation’s ingenious children’s game gone horribly wrong, and about lessons learned and never forgotten.

In “Dates,” Zubry returns to Saudi Arabia, for a closer inspection of that country’s traditions and the clash of its contemporary society with the values of the Western world.

The title of “Domestic Violence” speaks for itself as far as subject matter is concerned – and women readers in particular should be prepared for being confronted with a viewpoint which, while based on the author’s personal observations, is as far as can be imagined from a politically correct approach to the issue.

“Jewish Blood” deals with the encounter between a highly-decorated German officer and a Polish soldier on the WWII front lines outside Warsaw – and the discovery of an unexpected link between the two of them.

“Land of Sinbad the Sailor” again takes the reader to present-day Saudi Arabia; and while (particularly in the post-9-11-2001 world and the days of Middle Eastern terrorism) Zubry’s analysis here and, partly, already in “Dates” probably reflects that of many Westerners, I would expect there to be sharp disagreement from an Arab and/or Muslim point of view. Along with “Domestic Violence” and “Sexual Harassment” (see below), this is doubtlessly one of the book’s most controversial pieces. Yet, when juxtaposing it with the first story, “Ali,” and also taking into account Zubry’s praise of Arab traditions like that of hospitality in “Dates,” it may be surmised that his overall view of the Saudi society is more complex than appears to be the case here.

“The Last Pogrom” is the collection’s single longest entry: part novella, part nonfiction account, it addresses anti-Semitism in the officially atheist Soviet Union and its consequences for the individuals concerned, as exemplified by a promising young engineer studying at Leningrad’s prestigious, top secret Institute for Military Mechanics, and his experience during a high Jewish holiday.

“A Room for a Boy” (another favorite of mine) explores a man’s secret loneliness: Although well-liked and respected in his community both on his own merits and those of his clever cat, there is an unfulfilled spot in his life … and he has found a unique way of making up for it.

“Russian Dedication” (rounding up the list of my greatest favorites) takes a hilarious look at the trademark inefficiencies of the socialist economy, Soviet style; seen in a construction project stuck in time and in endless repetitions of the same useless routine.

“Sexual Harassment” tells the story of a woman’s discrimination lawsuit against a midsize Silicon Valley pharmaceutical company, and its effects even after it has been settled. Again, the author expresses views that not all of his readers (especially women and members of minorities) will be comfortable with, and which are unfortunately far from uncommon.

“Wild Strawberries,” finally, is another return to the author’s childhood days, and to a magical vacation gone horribly wrong; although in this case not for the narrator himself but for a much-idolized personal hero who is belatedly caught up in the Soviet society’s web of political intrigue.

The twelve pieces collected in “Miles of Experience” are diamonds in the rough: Sometimes I would have wished for the hands of an insightful editor: not to censor of course, nor do I think Mr. Zubry’s hand could (or should!) be forced – but to remove some of the rocky edges occasionally obscuring the underlying candle, and to bring it out in its full shine. Yet, even without such polish they make for an interesting read; and in a time when literature (and particularly so, essays and short stories) increasingly seem to be about form and language rather than content, it is refreshing to find an author who is not afraid of expressing a straightforward opinion, while at the same time understanding the lyrical beauty of everyday life.