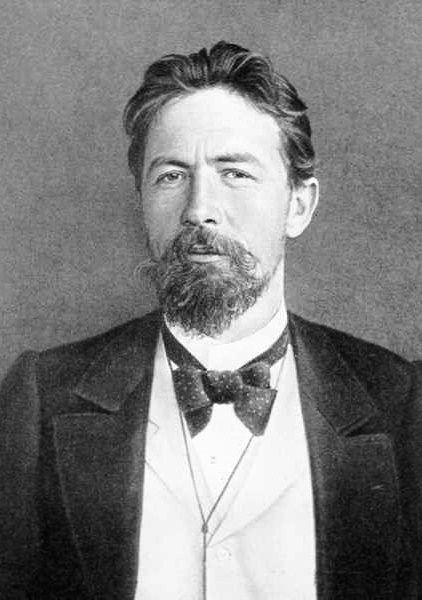 Anton Pavlovich Chekhov (Russian: Анто́н Па́влович Че́хов; Taganrog, Russia, January 29, 1860 – Badenweiler, Germany, July 15, 1904) was a Russian physician, dramatist and author who is considered to be among the greatest writers of short stories in history. His career as a dramatist produced four classics and his best short stories are held in high esteem by writers and critics. Chekhov practised as a doctor throughout most of his literary career: “Medicine is my lawful wife”, he once said, “and literature is my mistress.”

Chekhov renounced the theatre after the disastrous reception of The Seagull in 1896, but the play was revived to acclaim in 1898 by Constantin Stanislavski’s Moscow Art Theatre, which subsequently also produced Chekhov’s Uncle Vanya and premiered his last two plays, Three Sisters and The Cherry Orchard. These four works present a challenge to the acting ensemble as well as to audiences, because in place of conventional action Chekhov offers a “theatre of mood” and a “submerged life in the text.”

Chekhov had at first written stories only for financial gain, but as his artistic ambition grew, he made formal innovations which have influenced the evolution of the modern short story. His originality consists in an early use of the stream-of-consciousness technique, later adopted by James Joyce and other modernists, combined with a disavowal of the moral finality of traditional story structure. He made no apologies for the difficulties this posed to readers, insisting that the role of an artist was to ask questions, not to answer them.

The Portable Chekhov: The Mill

“There are a great many opinions in this world, and a good half of them are professed by people who have never been in trouble.”

“The illusion which exalts us is dearer to us than ten thousand truths.”
Quoting Alexander Pushkin’s The Hero.

Ward No. 6 and Other Stories

“The past,’ he thought, ‘is linked with the present by an unbroken chain of events flowing one out of another.’ And it seemed to him that he had just seen both ends of that chain; that when he touched one end the other quivered.”

“If you are afraid of loneliness, don’t marry.”

Anton Chekhov: A Life in Letters

“Civilized people must, I believe, satisfy the following criteria:
1) They respect human beings as individuals and are therefore always tolerant, gentle, courteous and amenable … They do not create scenes over a hammer or a mislaid eraser; they do not make you feel they are conferring a great benefit on you when they live with you, and they don’t make a scandal when they leave. (…)
2) They have compassion for other people besides beggars and cats. Their hearts suffer the pain of what is hidden to the naked eye. (…)
3) They respect other people’s property, and therefore pay their debts.
4) They are not devious, and they fear lies as they fear fire. They don’t tell lies even in the most trivial matters. To lie to someone is to insult them, and the liar is diminished in the eyes of the person he lies to. Civilized people don’t put on airs; they behave in the street as they would at home, they don’t show off to impress their juniors. (…)
5) They don’t run themselves down in order to provoke the sympathy of others. They don’t play on other people’s heartstrings to be sighed over and cosseted … that sort of thing is just cheap striving for effects, it’s vulgar, old hat and false. (…)
6) They are not vain. They don’t waste time with the fake jewellery of hobnobbing with celebrities, being permitted to shake the hand of a drunken [judicial orator], the exaggerated bonhomie of the first person they meet at the Salon, being the life and soul of the bar … They regard prases like ‘I am a representative of the Press!!’ – the sort of thing one only hears from [very minor journalists] – as absurd. If they have done a brass farthing’s work they don’t pass it off as if it were 100 roubles’ by swanking about with their portfolios, and they don’t boast of being able to gain admission to places other people aren’t allowed in (…) True talent always sits in the shade, mingles with the crowd, avoids the limelight … As Krylov said, the empty barrel makes more noise than the full one. (…)
7) If they do possess talent, they value it … They take pride in it … they know they have a responsibility to exert a civilizing influence on [others] rather than aimlessly hanging out with them. And they are fastidious in their habits. (…)
8) They work at developing their aesthetic sensibility … Civilized people don’t simply obey their baser instincts … they require mens sana in corpore sano.
And so on. That’s what civilized people are like … Reading Pickwick and learning a speech from Faust by heart is not enough if your aim is to become a truly civilized person and not to sink below the level of your surroundings.”
[From a letter to Nikolay Chekhov, March 1886]

“In displaying the psychology of your characters, minute particulars are essential. God save us from vague generalizations!”

“Be sure not to discuss your hero’s state of mind. Make it clear from his actions.”

“When describing nature, a writer should seize upon small details, arranging them so that the reader will see an image in his mind after he closes his eyes. For instance: you will capture the truth of a moonlit night if you’ll write that a gleam like starlight shone from the pieces of a broken bottle, and then the dark, plump shadow of a dog or wolf appeared. You will bring life to nature only if you don’t shrink from similes that liken its activities to those of humankind.”
(Frequently rendered simply as: “Don’t tell me the moon is shining; show me the glint of light on broken glass.”)

“Any idiot can face a crisis; it’s this day-to-day living that wears you out.”

Find more quotes by Anton Chekhov on Wikiquote and Goodreads.