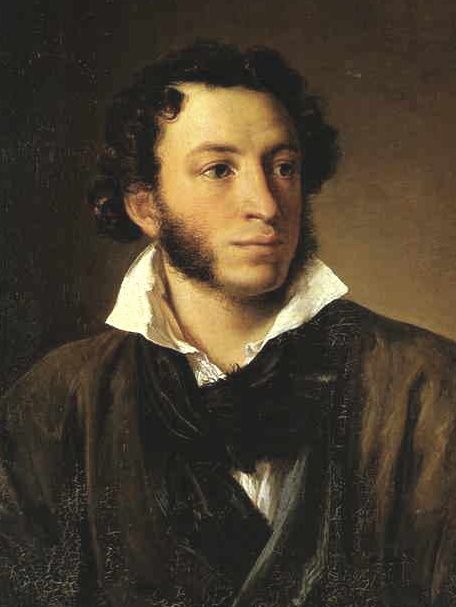 Alexander Sergeyevich Pushkin (Russian: Алекса́ндр Серге́евич Пу́шкин, transliterated Aleksandr Sergeyevich Pushkin; Moscow, Russia, June 6 [O.S. May 26], 1799 – Saint Petersburg, Russia, February 10 [O.S. January 29], 1837) was a Russian author of the Romantic era who is considered by many to be the greatest Russian poet and the founder of modern Russian literature.

Pushkin was born into the Russian nobility in Moscow. A remarkable fact about his ancestry is that one of his great-grandfathers – Abram Gannibal – was brought over as a slave from Africa and rose to become an aristocrat. Pushkin published his first poem at the age of fifteen, and was widely recognized by the literary establishment by the time of his graduation from the Tsarskoye Selo Lyceum. While under the strict surveillance of the Tsar’s political police and unable to publish, Pushkin wrote his most famous play, the drama Boris Godunov. His novel in verse, Eugene Onegin, was serialized between 1825 and 1832.

Notoriously touchy about his honour, Pushkin fought a total of twenty-nine duels, and was fatally wounded in such an encounter with Georges-Charles de Heeckeren d’Anthès. D’Anthès, a French officer serving with the Chevalier Guard Regiment, had been attempting to seduce the poet’s wife, Natalya Pushkina. Pushkin’s early death at the age of 37 is still regarded as a catastrophe for Russian literature.

Critics consider many of his works masterpieces, such as the poem The Bronze Horseman and the drama The Stone Guest, a tale of the fall of Don Juan. His poetic short drama Mozart and Salieri was the inspiration for Peter Shaffer’s Amadeus. Pushkin himself preferred his verse novel Eugene Onegin, which he wrote over the course of his life and which, starting a tradition of great Russian novels, follows a few central characters but varies widely in tone and focus. Onegin is a work of such complexity that, while only about a hundred pages long, translator Vladimir Nabokov needed two full volumes of material to fully render its meaning in English. Pushkin has profoundly influenced western writers like Henry James.

Pushkin is usually credited with developing Russian literature; both in originating the highly nuanced level of language which characterizes Russian literature after him, and in substantially augmenting the Russian lexicon. Where he found gaps in the Russian vocabulary, he devised calques or loan translations (i.e., words or phrases borrowed from another language by literal, word-for-word or root-for-root translation.). His rich vocabulary and highly sensitive style are the foundation of the Russian literary tradition from the 19th century onwards and the basis of the style of novelists such as Ivan Turgenev, Ivan Goncharov and Leo Tolstoy, as well as that of subsequent lyric poets starting with Mikhail Lermontov. Alexander Pushkin introduced Russia to all the European literary genres, as well as a great number of West European writers. He introduced natural speech and foreign influences to create modern Russian poetry. Though his life was brief, he left examples of nearly every literary genre of his day: lyric poetry, narrative poetry, the novel, the short story, the drama, the critical essay, and even the personal letter. So, too, from him derive the folk tales and genre pieces of other authors, such as Leskov, Esenin and Gorky.

Simultaneously, Pushkin’s work as a journalist also marked the birth of the Russian magazine culture, including his devising and contributing heavily to one of the most influential literary magazines of the 19th century, the Sovremennik (The Contemporary, or Современник). Pushkin’s works also provided fertile ground for Russian composers. Ivan Glinka’s Ruslan and Lyudmila is the earliest important Pushkin-inspired opera, and a landmark in the Russian musical tradition. Tchaikovsky’s operas Eugene Onegin (1879) and The Queen of Spades (1890) are as well-known outside of Russia as Pushkin’s own works of the same name. Mussorgsky’s monumental Boris Godunov (two versions, 1868-9 and 1871-2) ranks as one of the very finest and most original of Russian operas. Other Russian operas based on Pushkin include Rimsky-Korsakov’s Mozart and Salieri, Tale of Tsar Saltan, and The Golden Cockerel; Tchaikovsky’s Mazeppa; Rachmaninov’s one-act operas Aleko (based on The Gypsies) and The Miserly Knight; and Stravinsky’s Mavra.

Translated into all the major languages, his works are regarded both as expressing most completely Russian national consciousness and as transcending national barriers. Pushkin’s intelligence, sharpness of his opinion, his devotion to poetry, realistic thinking and incredible historical and political intuition make him one of the greatest Russian national geniuses.

The Queen of Spades

“Two fixed ideas can no more exist together in the moral world than two bodies can occupy one and the same place in the physical world.”

“Moral maxims are surprisingly useful on occasions when we can invent little else to justify our actions.”

“The illusion which exalts us is dearer to us than ten thousand truths.”
Quoted in Anton Chekhov’s Gooseberries.

Find more quotes by Alexander Pushkin on Wikiquote and Goodreads.