Agatha Christie: The Secret of Chimneys 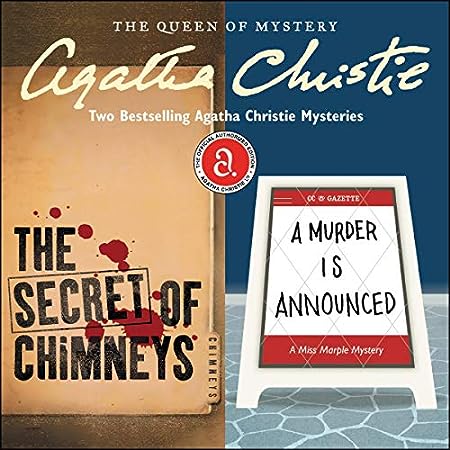 Oh, I would love to love this book so much more than I ultimately do.  There Christie goes and takes me on a merry romp in the spirit of The Secret Adversary (whose plot, let’s face it, is every bit as implausible as that of The Secret of Chimneys), complete with adventurers, mysterious manuscripts and letters, and the adorable Bundle Brent (of whom we’ll fortunately be seeing much more in The Seven Dials Mystery) … and then she ruins it all in the final reveal.

It’s hard to say anything about this book without spoiling it in a major way (I’ll try, but no guarantees whatsoever); and of course there are enormous risks in extrapolating from a book to the author’s internal and external life, and again of course I may be completely, utterly wrong, and maybe I’m overthinking this in a big way to begin with.  But still.  I can’t shake the feeling that Christie, while writing this novel, wasn’t at all sure where she herself was as a person: still the would-be intrepid adventurer who, not so long ago, had joined the British Empire Expedition, gone surfing and jungle-exploring in South Africa — and exploring some more in Australia and New Zealand, and surfing again in Hawaii — and returned home a year later, penniless but so much richer in experience … or the responsible wife and mother that she had been expected to become once she had “settled down”, and that maybe she felt she had to be (at least the “mother” part of it) once it became clear that her husband certainly wasn’t the responsible element in her marriage?  Whatever it is — this sort of unresolved conflict on the part of the author herself or something else — ultimately there is a contradiction that shows in this book which Christie seems to have been unable to resolve satisfactorily, and which ultimately impacts this book in a fateful way.

Facially, the book’s narrator, Anthony Cade, is a brother in spirit to the man who sweeps the heroine of Christie’s previous novel (The Man in the Brown Suit) off her feet, to settle once and for all on an island in the middle of a river in the wilds of South Africa.  Some participants of the “Appointment with Agatha” group read compared Anthony to Cary Grant; others, who had picked up on his public school (Eton, etc.) voice, rejected that.  Ultimately (and staying within the confines of this survey of my own recent reading), perhaps it would be more accurate to compare him to the likes of Patrick Leigh Fermor: A man born to privilege and to a British public school education, but who deliberately rejects that privilege in favor of a life of adventure.  (PLF’s three-year walk all across Europe to Constantinople was his response to having been unceremoniously dumped, permanently, by his own public school for essentially breaking every rule in its book (repeatedly), and only the first venture of a lifetime of travel “off the beaten path”.  The Kreipe abduction was by far not his only high-risk venture during WWII.  And he never returned to England for good, even though he ended up owning a house and spending part of the year there in later life — he lived a life of travel literally until his dying day and considered Greece, where he spent most of his time from WWII on, his true home.  Moreover, although his friends included members of the class into which he was born, he was famous for forming close friendships easily and indiscriminately, regardless of the other person’s origin and social status; this, too, is something from which his travel writing benefited enormously.)  Or, to pick an example from an African setting, Karen Blixen (Isak Dinesen) and Beryl Markham‘s lover Denys Finch-Hatton — BUT not in his real life persona, but as incarnated by Robert Redford in the movie Out of Africa, a casting choice that director Sydney Pollack explained in an interview included in the movie’s DVD release by stating that he couldn’t have cared less about Finch-Hatton’s aristocratic background; all he was interested in was the adventurer, and at the time of the movie’s production there was no actor who stood more iconically for that type of man than Redford. — And like the Patrick Leigh Fermors and Denys-Finch-Hatton-as-portrayed-by-Robert-Redfords of this world, and also quite a number of the characters portrayed by Cary Grant, Anthony Cade has deliberately rejected his class privilege and chosen the uncertain life of an adventurer instead, sustained periods of downright poverty included: in fact, we first meet him as a tour guide to a group of travelers who, at this point, are quite obviously in vastly safer financial straits and decidedly more comfortable with their privileged status than he himself.

Now, in the final reveal, we then learn that this is not who Anthony Cade is at all.  BUT what superficially seems like a logical reveal if you only look at his public school voice just doesn’t gel with the essence of this sort of character.  The Patrick Leigh Fermors and Denys-Finch-Hatton-as-portrayed-by-Robert-Redfords of this world don’t simply, at some convenient moment, make an about-face and settle down to precisely the sort of life they have previously rejected — not even if (as we are told happens in Anthony Cade’s case) their original reasons for rejecting a settled, privileged life no longer hold true.  Rather, they either die while still comparatively young in the middle of one of their adventures (as Denys Finch-Hatton actually did) or, like Patrick Leigh Fermor, they never entirely settle down at all — it’s just not in their nature.  Because leading an adventurer’s life, ultimately, is not a matter of ideology (marxist, anti-aristocratic, progressive, or what-have-you); it’s a matter of character and inclination.  And if you’re constitutionally adverse to being tied down to a sedentary lifestyle — let alone the narrowly circumscribed life that Anthony seems to be embracing wholeheartedly at the end of The Secret of Chimneys — you won’t ever be comfortable even trying to live that sort of life.  Agatha Christie understood this very well — we know this because that’s precisely the reasoning that Anne Beddingfeld (an adventuress herself) and her husband-to-be give for their choice of abode and lifestyle at the end of The Man in the Brown Suit.  So, long story short and never mind the public school voice, I simply can’t buy the final reveal of The Secret of Chimneys, and I’m literally left wondering “what the heck was Christie thinking?” every time I get to that point.

Anthony Cade aside, The Secret of Chimneys introduces us to several of Christie’s minor recurring characters, chief among them the unstoppable Bundle Brent, who gets way too little page time here, her scatterbrained but lovable father Lord Caterham, as well as the unflappable Superintendent Battle; and they are definitely among the highlights of this book.  As is Virginia Revel, whom Christie sets up as Anthony’s love interest early on, and whose independent spirit and sophistication indeed do make her a good match for him (if any woman can bridge the unresolved contradiction built into his character, that woman is Victoria Revel).

I am glad that Christie decided to return to Hercule Poirot for her next novel, though.  She clearly had some issues to work out that affected her writing, at least with regard to the books falling partly outside the straightforward mystery genre, and whatever it was she needed to resolve, it’s a good thing that she decided to do it “off stage.”

3 thoughts on “Agatha Christie: The Secret of Chimneys”