Patrick Radden Keefe: Say Nothing: A True Story of Murder and Memory in Northern Ireland 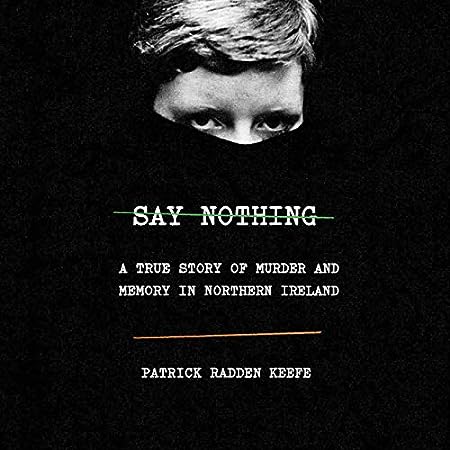 This was a buddy read with some of my BookLikes exile friends — the inside story of the Northern Ireland conflict, the “Troubles”, from (chiefly) the 1960s up to the Good Friday Agreement and (partways) beyond, inspired and based in part on taped interviews with some of the conflict’s key players recorded in the context of a Boston College project that were intended to remain confidential, but were prematurely forced into the open as a result of police investigations into IRA terrorist activity.

Keefe traces the histories of victims to the conflict, such as the McConville family, whose lives changed dramatically when their mother Jean was abducted (and, it would later turn out, murdered) by IRA terrorists one day out of the blue, leaving behind ten underage children who were ripped apart and, for the most part, only found each other again (and reestablished a more or less tenuous relationship) years later, as severely scarred adults.  He traces the histories of several IRA terrorists, with a particular focus on Dolours Price, who together with her sister Marian was convicted to a lengthy prison term for her active participation in the 1973 Old Bailey bombing, and whose case attracted a great deal of notoriety as a result of the Price sisters’ protracted hunger strike in a bid to be transferred from their English prison back to Ireland; as well as Brendan Hughes, Officer Commanding (OC) of the IRA Belfast Brigade and, like Dolours Price — according to Keefe’s account, based on interviews with both of them — one of the persons directly involved in Jean McConville’s abduction and murder.  (There’s also quite a bit about the role played by Gerry Adams in the context of the Troubles, and the question whether or not he was ever a member of the IRA himself — Adams vigorously denies it, Price and Hughes equally vigorously assert that he was.)  And Keefe tells the story of the “Belfast Project” at Boston College, devised to create a record of the “Troubles” by way of interviews with the key players on the IRA side, who were assured confidentiality and were told that their interview tapes would only be released after their deaths; only to find that these promises had not been made legally waterproof and thus ultimately didn’t stand up to a challenge brought by the UK police authorities seeking access to the interviews as prosecution evidence.

In terms of narrative approach, the one thing that struck me from the beginning, and which stayed with me right until the end of the book, was that Keefe is very, very obviously an investigative journalist, not a historian: He plunges you right into one particular moment — the crucial moment in the collective lives of one specific family, the McConvilles; victims of the conflict (would it be cynical to say “victims, of course, this being a book by an investigative journalist”?), which he relates in great detail and with an enormous sense of urgency, and he builds essentially his entire narrative from there.  This makes for an incredible amount of immediacy in the reading experience; and given that we are talking about events that, for a substantial part of Keefe’s readers, never were something that impinged on their personal lives — not even by way of nightly newscasts –, it was probably a wise choice to frame the narrative that way.  The downside of this approach is that if you haven’t witnessed, in your own lifetime, the decades of conflict that he describes, and you know little about Ireland’s history (the Republic of Ireland’s, Northern Ireland’s and the island’s history generally), at some point the narrative is bound to get confusing, even if (as Keefe does) the author focuses chiefly on tracing the history of a select number of individuals and events.

To me, the book brought back the memory of a constant stream of newscasts of bombings, bloodshed, tears, suffering, a community torn apart by sectarian hatred, and the desperate question “How can this still be happening, in the otherwise peaceful (Western) Europe that our parents and we ourselves built out of the ashes of WWII — how can this be happening in our modern day and age?”  Even though growing up I didn’t personally know anybody in Ireland yet (though my BFF had friends in Dublin), next to the fall of the Berlin Wall in 1989, the 1995 Good Friday Agreement (GFA) brought about the seminal change of the world in which I had come of age.  By 1995 (indeed, even by 1989), I had long embarked on my path into professional life, and had considered myself to have left childhood behind even longer; as a matter of fact, my very first career experience directly involved the restructuring of the justice and legal system on the Berlin end of what had been socialist East Germany and was now to be integrated into the unified Germany’s overall structure.  Yet, looking back it is hard not to lump 1989 and 1995 together as one single dividing line between my childhood and adulthood and give way to a blanket association of the Cold War and the unresolved Northern Ireland conflict with my childhood experience, and the post-Cold-War world (with its very own horrors that would soon unfold in Rwanda, once more on European soil in the former Yugoslavia, and in countless wars, civil wars, and genocide campaigns the world over since) with my adult life.

However, Say Nothing is far more a book of reminiscences of a long-gone conflict; in fact, it couldn’t be any more timely.  As a consequence of Brexit, and of the wholly insufficient way in which the last-minute agreements are addressing the “Northern Ireland issue”, the old battle lines that were believed to have finally been buried by the GFA are again rearing their ugly heads.*  The rhetoric on both sides of the Northern Irish conflicts has already heated up, and even bombs and other acts of violence have made a return appearance.  So this book comes as a very useful reminder as to what a monumental achievement the GFA really is, and just what is being put into peril as a result of Brexit.  (In fact, I went through large passages of wanting to yell at those responsible for the current mess: “Is this really what you want to go back to??”)  If I nevertheless ultimately withheld a star from my rating it was because, for the reasons stated further above, I think the book would have benefited from an effort to place the Troubles, and the specific incidents related, into a focused historical perspective — not of the entire history of Ireland, of course, but of the political and social origins of the conflict, which is, after all, about much more than religious or national affiliation; which in turn, however, is not something you learn from Keefe’s book (in fact, reading Say Nothing, the wider social, economic, and political implications of the Troubles don’t appear as part of the picture at all).

Still and all, this book comes highly recommended.  And for those interested in a perspective that does place the conflict into a historical, economic, social and legal perspective, I recommend Carol Daugherty Rasnic’s Northern Ireland: Can Sean and John Live in Peace?

* For those who’ve been lucky enough not to have to follow this quite as closely:  Northern Ireland is part of the UK, which as a result of the Brexit vote has left the EU; BUT as an integral part of the GFA Northern Ireland enjoys a special “open borders” relationship with the Republic of Ireland, which is an EU member.  The UK, the Republic of Ireland and the U.S. (as a guarantor) are signatories to the GFA and bound by its terms; the EU has incorporated the GFA into its own legal framework.  The Republic of Ireland, the U.S., and the EU are adamant that the GFA — and the peace and prosperity that it has brought — must not under any circumstances be put into peril as a consequence of Brexit.  The UK government, in turn, doesn’t want a border “in the Irish Sea”, i.e. between Ireland and “mainland” UK; it does however want the “regular” border coming with Brexit between all of the UK (including Northern Ireland) and all of the EU (including the Republic of Ireland) — which directly conflicts with the provisions of the GFA.  The issue has been addressed by a set of temporary provisions — the so-called Northern Ireland Protocol — in the Brexit agreements cobbled together literally at the last minute in December 2020 (trying to prevent the even greater catastrophe of a flat-out “no deal” Brexit, which was then looming on the horizon as of January 1, 2021), but judging by what is reported in the news and by trade experts and insiders, these provisions are working anything but seamlessly, which given the complexities both of the legal framework involved and of the practicalities of its implementation, does not exactly come as a surprise to anybody who has spent even a fraction of a brain cell thinking about the issue.  Moreover, in the time between July 2016 (Brexit vote) and December 2020, the Brexiteers’ and UK government’s conflicting and often flat-out nonsensical rhetoric on the issue had already created a huge sense of insecurity in Ireland — NI especially, but also the Republic –; and of course the wobbly implementation of the December 2020 Northern Ireland Protocol and other Brexit agreements only adds further to that insecurity.  As does the fact that in the few weeks and months since December 2020, there have already been several severe spats between the UK government and the EU over details of the implementation of said agreements, with both sides repeatedly threatening litigation (and the EU actually giving formal notice of its intent to initiate litigation over one particular issue in mid-March 2021).

2 thoughts on “Patrick Radden Keefe: Say Nothing: A True Story of Murder and Memory in Northern Ireland”