On the dreams under Northern Ireland’s feet 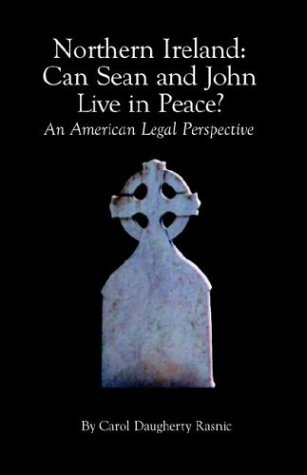 Ireland’s history is a violent one and, as Fulbright Fellow Carol Daugherty Rasnic shows in this book’s first chapter, this is not only true for the 20th century but dates back at least to the island’s 1169 Norman conquest – and actually, even further, as the Viking invasion of the 8th, 9th and 10th centuries consisted of a series of rather aggressive campaigns as well. The difference, however, was that despite these bloody beginnings the Viking colonists were eventually absorbed into Irish culture and daily life; contributing thereto rather than continuing their attempts at its suppression. Conversely, throughout much of Ireland’s subsequent history, suppression was the preferred method of government of both the Normans and their British descendants; who brought in English settlers not to cultivate the island together with their Irish neighbors but to drive those out, thus sowing the seeds of the hatred still plaguing its society today, and no more so than in the six provinces still constituting British-controlled Northern Ireland, after the ill-famed 1920 Partition which eventually brought independence to the island’s southern part.

Inseparably linked to nationality was, particularly from the times of Henry VIII on, the issue of religion; the English settlers being Protestants belonging to the Church of England/Ireland, while the vast majority of the Irish hung on to their Catholic faith; thus suffering discrimination not only on the basis of their nationality but also that of their religious beliefs. Tracing the multiple facets of today’s division to their historic origins, Professor Rasnic shows how the identification as “Catholic” and “Protestant” has long come to exceed a mere religious denomination, mixing with everything from a person’s stance towards the British administration of Northern Ireland to his or her national/ethnic origin, area of residence and social environment; to the point that the religious label is used even by those who have little to no spiritual connection to the church whose faith they claim as their own.

In the eight chapters following the book’s initial historic overview, the author takes an in-depth look at the major issues dominating contemporary Northern Ireland life and politics, from ethnic strife and the (particularly: “Orange,” i.e. unionist) parades, apt to newly ignite the fires of hatred every summer, to issues of governance, the release of prisoners convicted of terrorist acts, “decommissioning” (i.e., disarmament of the paramilitary groups active on both sides of the conflict), the position of the police and the administration of (criminal) justice, human rights and instances of persisting discrimination, and finally, the sectarianism in the province’s schools, threatening to perpetuate the existing divide for a long time to come. Particular emphasis is given to the terms and effects of the so-called Good Friday Agreement, the April 10, 1998 agreement between Northern Ireland’s major political parties and the governments of Ireland and Great Britain designed to bring an end to the province’s “Troubles.”

Although the book is subtitled “An American Legal Perspective,” this is by no means the work of an outsider: Professor Daugherty Rasnic herself is the daughter of Irish immigrants on both parents’ sides, and prolonged stays in both Northern Ireland and the Republic of Ireland have intimately acquainted her with an island which, quite obviously, is not merely her ancestors’ home but an inseparable part of her own identity as well. A lawyer by training, she moreover brings to the subject the analytical skills necessary to digest problems as intricate as those ravaging the province of Northern Ireland; and her interest in and experience with the American civil rights movement provides for a truly unique perspective, enabling her to not only put the Northern Irish situation into a larger European context but also draw comparisons to similar issues of racial strife and discrimination in the U.S.

Aware that the issues she addresses – particularly with regard to the legal aspects of the Good Friday Agreement – may well have the effect of a strong barbiturate on her non-lawyer readership, the author apologizes for having to address matters which “only a constitutional [law] purist could love.” Quite unnecessarily so, however, as she does a marvelous job in explaining a set of highly complex questions of constitutional and international law which, I am sure, are confusing to many lawyers as well. Moreover, Professor Rasnic’s manifold comments, anecdotes relating to her own experience and sections entitled “A Personal Perspective” provide a truly personal tone; while scholarly in its overall approach to the subject and dedication to detail, the book nevertheless reads more like a conversation with the author, reflecting much of her doubtlessly vivacious nature, passion, empathy and sense of humor – humor even in the face of adversity proving her yet again, as cliché (and maybe not just that) would have it, a true daughter of Irish parents.

In addition to all its other merits, this book also benefits from its author’s easy access to over twenty principals and other individuals involved in the Northern Irish peace process, from then-First Minister David Trimble and Police Chief Constable Ronnie Flanagan to Northern Ireland Assembly members of virtually all political colors (with the notable exception of the Rev. Ian Paisley, whose camp seems to have been the only one to adopt an obstructionist attitude), judges, attorneys, clergymen, social workers and professors at various universities; all of who add their own insight and perspective on the “Troubles,” and whose comments are faithfully reported; in many instances verbatim.

Professor Daugherty Rasnic concludes her analysis with the words of Irish poet William Butler Yeats: “I have spread my dreams under your feet. Tread softly because you tread on my dreams.” Like the great poet’s words, her book expresses the hope that, one day, Northern Ireland may find a lasting way out of its “Troubles” (and no doubt, she is watching the province’s recent political developments with a certain sense of trepidation). With this book, she has made a contribution of her own to the search for such a path – and I have a feeling that it will not have been the only one.