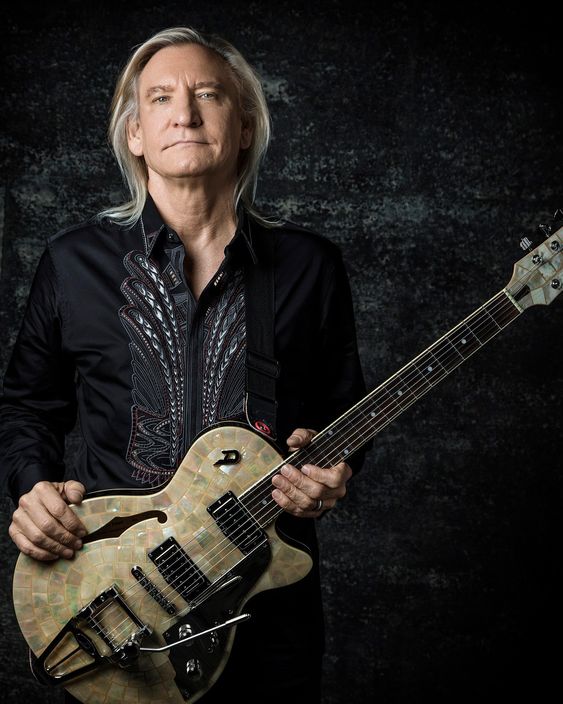 Joseph Fidler “Joe” Walsh (born Wichita, KS, USA, November 20, 1947) is an American musician, songwriter, record producer, and actor. He has been a member of three commercially successful bands: the James Gang, Barnstorm, and The Eagles. He has also experienced success both as a solo artist and prolific session musician. He holds the 54 spot in Rolling Stone magazine’s “100 Greatest Guitarists of All Time.”

A native of Wichita, Kansas, Walsh and his family lived in Columbus, Ohio, for a number of years. His mother was a classically trained pianist. When Walsh was twelve years old the family moved to New York City. Later, Walsh moved to Montclair, New Jersey and attended Montclair High School there. While attending Kent State University, he spent time in various bands playing around the Cleveland area, including The Measles. Walsh began a lifelong hobby of amateur (“ham”) radio while living in New York City.

In January 1968 he replaced Glen Schwartz as lead guitarist for the James Gang, a five piece American band that rapidly became a power trio after the lead singer and keyboardist quit. Walsh proved to be the band’s star attraction, noted for his innovative rhythm playing and creative guitar riffs. In particular he was known for hot-wiring the pickups on his electric guitars to create his trademark “attack” sound. The James Gang had several minor hits and became an early album-oriented rock staple for the next two years, including James Gang Live at Carnegie Hall. In November 1971, Walsh left the group and formed the group Barnstorm, although their albums credited Walsh as a solo artist. Walsh and Barnstorm released their debut, the eponymous Barnstorm in 1972. The album was a critical success, but had only moderate sales. The follow-up The Smoker You Drink, the Player You Get (1973) was titled under his own name (although officially a Barnstorm album) and was Walsh’s commercial breakthrough. The first single Rocky Mountain Way received heavy airplay and reached #23 on the US Top 40 chart. In 1974 Barnstorm disbanded and Walsh continued as a solo artist.

In December 1974, Walsh released an official solo album, So What and in March 1976, a live set, You Can’t Argue with a Sick Mind. These would be his last solo albums until 1978. On December 20, 1975 he joined The Eagles as Bernie Leadon’s replacement. His addition steered the band toward a harder-edged sound and away from their early country-style work, and he was featured prominently on their multi-million-selling album Hotel California, co-writing the Top 20 hit Life in the Fast Lane (with Don Henley and Glenn Frey) and Pretty Maids All in a Row (co-written with former Barnstorm drummer Joe Vitale).

As The Eagles struggled to record the follow-up to Hotel California, Walsh re-ignited his solo career with the well-received album But Seriously, Folks … (1978) which featured his hit comic depiction of rock stardom, Life’s Been Good. Walsh also contributed In the City to The Warriors soundtrack (1979), a song penned and sung by Walsh that was later rerecorded for The Eagles‘ The Long Run album.

Following the breakup of The Eagles in 1980, Walsh continued to release albums throughout the 1980s, but sales were poor. He maintained a low profile until the mid-1990s. Despite the band’s breakup he was, however, a background musician (1st guitar solo) on Eagles bandmate Don Henley‘s 1982 solo hit Dirty Laundry. He also played guitar throughout Who bassist John Entwistle’s 1981 solo album Too Late The Hero and was a regular guest DJ on the Los Angeles radio station KLOS during the mid-1980s, which had a Saturday evening feature, with celebrity guest-hosts taking over the microphone. Walsh was the guest host far more frequently than any other. He was also a frequent guest and guest-host of Detroit and Chicago radio personality Steve Dahl.

In late 1984 Walsh was contacted by Australian musician Paul Christie, former bassist in Mondo Rock, who invited him to come to Australia to perform with The Party Boys, an all-star group with a floating membership of well-known Australian rock musicians, which included acclaimed guitarist Kevin Borich, with whom Walsh became good friends. Walsh accepted and performed with the Party Boys on their late 1984-early 1985 Australian tour and appeared on their live album You Need Professional Help. He remained in Australia for some time after the tour, putting together the short-lived touring group Creatures From America, with Waddy Wachtel (guitar), Rick Rosas (bass) and Australian drummer Richard Harvey (Divinyls, The Party Boys). Walsh returned to Australia in 1989 to tour with another incarnation of The Party Boys. He toured with Ringo Starr in 1989, alternating a handful of his best-known songs with Ringo’s tunes, as did all the members of the All Starr Band. In 1989, Walsh recorded a MTV Unplugged with the R&B musician Dr. John. Also in 1989 Walsh filmed a live concert from the Wiltern Theater in Los Angeles with Etta James and Albert Collins. Jazzvisions: Jump The Blues Away.

While producing their Homegrown album in 1989, Walsh briefly joined New Zealand reggae band Herbs. Although he had left by the time of its 1990 release, he still appears as lead vocalist on two tracks, Up All Night and It’s Alright, and the album includes the first recording of his Ordinary Average Guys (sung by late Herbs bassist Charlie Tumahai), which subsequently became a solo hit for Walsh as Ordinary Average Guy. In late 1990, Walsh was part of a band called The Best, along with keyboardist Keith Emerson, bassist John Entwistle, guitarist Jeff “Skunk” Baxter and drummer Simon Phillips. The band performed several shows in Hawaii and Japan, with a live video esulting. Walsh has also contributed to albums by America, REO Speedwagon, Andy Gibb, Emerson, Lake & Palmer and Steve Winwood. He sang the US National Anthem at the beginning of game five of the 1995 World Series.

In 1994, Walsh reunited with The Eagles for a highly successful reunion tour and live album, Hell Freezes Over. Walsh has toured regularly with The Eagles since then and the group released their first new studio album in 28 years, Long Road Out of Eden, in 2007.

In June 2004, Walsh performed at Eric Clapton’s Crossroads Guitar Festival in Dallas, Texas. He was also featured in September 2004 at The Strat Pack, a concert held in London, England to mark the 50th anniversary of the Fender Stratocaster guitar. In 2006, Walsh reunited with Jim Fox and Dale Peters of the James Gang for a 15-date summer reunion tour. The tour lasted into the fall.

Walsh’s song One Day At A Time deals with his struggles with alcoholism. He has been in recovery since 1995. In October 2004, Walsh undertook speaking engagements in New Zealand to warn against the dangers of substance abuse. He said the visit was a “thank you” to people who took him to Otatara Pa Historical Reserve when he toured New Zealand with reggae band Herbs while under heavy alcohol and cocaine addictions in 1989, an experience he has cited as the beginning of a long journey back to health. He has also been a contributor to such causes as halfway houses for displaced adult women in Wichita, Kansas.

Walsh ran for President of the United States in 1980 on top of his music career as a mock campaign. He promised to make Life’s Been Good the new national anthem if he won, and ran on a platform of “Free Gas For Everyone.” Though Walsh was not old enough to actually assume the office, he wanted to raise public awareness of the election. In 1992 Walsh ran for vice president with Rev. Goat Carson under the slogan “We Want Our Money Back!”.

His creative contribution to music has received praise from many of the best rock guitarists, including Led Zeppelin’s Jimmy Page, who is quoted to have said that “[Joe Walsh] has a tremendous feel for the instrument. I’ve loved his style since the early James Gang.” Eric Clapton declared him “one of the best guitarists to surface in some time” and added: “I don’t listen to many records, but I listen to his.” The Who’s guitarist, Pete Townshend, said, “Joe Walsh is a fluid and intelligent player. There’re not many like that around.” — In May 2012, Walsh was awarded an honorary doctorate from Berklee College of Music.

The Smoker You Drink, the Player You Get

There Goes the Neighborhood