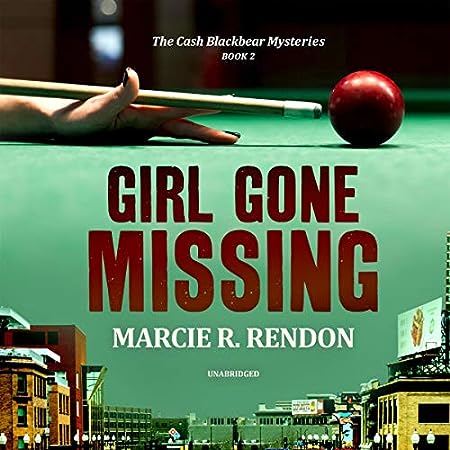 Given how much I liked Rendon’s debut novel, reading her second book, too, was pretty much a given for me.  Again she writes from the heart; in this instance, about the trafficking of young girls and women for sex purposes, the victims of which trade formed a large part of her day job before becoming an author.  And while (surprisingly) her relative inexperience as a writer shows a bit more here than it does in the first book — is it possible that first novels are edited more tightly, because they represent a bigger risk for the publisher? — there is, again, a lot to love here.

Towards the end of the first book, Sheriff Wheaton had pushed Cash to enroll in college, so part of what we’re witnessing in this book is Cash’s experience of moving in an academic setting, after having spent much of her time in the past couple of years working with her hands, on the land, and while still “hauling beets” in her off hours.  And while this aspect, as well as Cash’s being surrounded by white middle class students (and professors) might have veered into a whole number of cliché directions really fast, it fortunately doesn’t. — Another interesting level added in this book is the arrival of Cash’s brother, whom she has last seen as a child, over ten years earlier, and who one day shows up at her home, fresh back from a tour of duty in Vietnam and with a whole baggage of severe PTSD on top of the trauma of his own foster experience, which was different and not as instantly hurtful as Cash’s, but ultimately every bit as jarring.  Apparently Rendon called on a friend’s insights with regard to the Vietnam PTSD, and these passages indeed convey a great deal of emotional insight.  And then there’s Cash’s light bulb moment when, during a trip to “The Cities” (Minneapolis / St. Paul), she gets to see and touch the façade of the Grain Exchange — a place that forms part of her daily radio listening experience, but which she has so far been unable to imagine as a physical location, let alone get a handle of its inner workings; and which she now realizes for the first time is a real place, not merely a vague figment of her imagination. That, too, is very well done and went straight for my solar plexus.

Yet, it was also during this trip to “The Cities” that the book once again took a dive for me which, if it had been longer or even lasted until the end, would have killed every bit of my (until then, considerable) enjoyment.  Again, there had been minor “huh?” moments before, such as Cash’s astonishing ability to navigate by car in a city where she had never been before in her life — and Rendon is way too specific about locations for there to be any uncertainty about the whole thing — or the remarkable specificity of her dreams.  Like in book 1, I was essentially willing to shrug those moments off as comparatively minor in an otherwise well-written book (and dreams are an important experience in many Native American cultures, so I’ve come to expect these; even if one particular detail in Cash’s dreams here did strike me as over the top).  But a distinct pattern is emerging as to Cash’s suddenly surfacing “Mary Sue” qualities, and that is a real pity, because she wouldn’t need those in the least.  She’s 19 years old, for crying out loud, and however much she may have been toughened up by her life experience so far, there’s nothing wrong with giving her at least a bit of vulnerability or weakness in moments of extreme danger and when faced with overwhelming odds (even if only deep down inside, and without letting any of it show to others).  Making her this resolute and able to cope doesn’t add but, rather, takes away from her credibility.  Rendon shows in Cash’s brother that she is perfectly capable of writing this sort of thing into a character — it’s a pity that with Cash, of all people, she refrains from doing so.

Like in book 1, Cash again has her Mary Sue / Superwoman moment during a — no, THE — crucial moment of the book; like in book 1, she suddenly develops a resourcefulness in a moment of supreme stress and danger that, for all the tough cookie she may be, is simply not credible in a 19-year old.  And in this instance there is even another aspect to the event in question, which has been telegraphed about a million miles back (perhaps not in every detail, but definitely in and of itself), and which therefore — because I was literally waiting for it to happen — took away a good deal of the genuine sense of danger I might (and should!) otherwise have felt.  (SPOILER WARNING for the rest of this paragraph)  Moreover, unlike in book 1, in this instance Cash not only manages to save herself but also others, which jacks up the unbelievability factor by yet another notch.  Oh, and while we’re at it:  In an author’s note at the end of the book, Rendon directly addresses the reader and says she hopes “you” (I / we, reader(s)) will realize how extraordinarily generous Cash has been in that moment, not just trying to get out alone.  Excuse me?!  Lady, you don’t get to tell me how I’m supposed to feel about your characters.  Or their actions.  Or anything else in your book.  Or, for that matter, your book as such.  Or you as a writer.  Do this again, and we’ll part company for good.  (In fact, we might already have parted company if you’d put this bit into a foreword and not an afterword.)  And that’s not even mentioning that there are excellent reasons for considering Cash’s actions supremely selfish — because saving just herself might ultimately have turned out the more dangerous short-sighted option.  That being said, as a matter of fact I had seen Cash’s actions in this particular scene more in the light of generosity initially — but the comment in Rendon’s author’s note made me think twice and awakened the contrarian in me.  So all told, it proved about as counterproductive as it possibly could have been.

Like in book 1, Cash really only dons her Superwoman cape in the plot’s one decisive moment.  And like in book 1, there is much to like yet again once we’ve put the Mary Sue nonsense behind us.  So overall, this still rates in the four-star range for me.  But I’m growing a bit weary, both because of Cash’s sudden but recurring Superwoman qualities, and because of Rendon’s egregiously crossing the line into preachiness in her author’s note.  I think I’m still going to take a look at book 3.  But if the emerging trend continues, I might just decide to call it quits after that, however much I might have enjoyed most of the first two books, and however glad I may be to have read book 1 of the series especially.