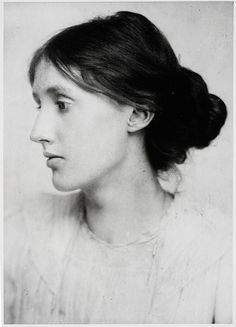 During the interwar period, Woolf was a significant figure in London literary society and a central figure in the influential Bloomsbury Group of intellectuals, which also included, inter alia, Lytton Strachey, Clive Bell, Rupert Brooke, Duncan Grant, Virginia’s husband Leonard Woolf, economist John Maynard Keynes, and Roger Fry. The ethos of the Bloomsbury group encouraged a liberal approach to sexuality, and in 1922 she met the writer and gardener Vita Sackville-West, wife of Harold Nicolson. In 1928, Woolf presented Sackville-West with Orlando, a fantastical biography in which the eponymous hero’s life spans three centuries and both sexes. Nigel Nicolson, Vita Sackville-West’s son, wrote that “The effect of Vita on Virginia is all contained in Orlando, the longest and most charming love letter in literature.” After their affair ended, the two women remained friends until Woolf’s death in 1941.

Woolf’s most famous works include the novels Mrs Dalloway (1925), To the Lighthouse (1927) and Orlando (1928), and the book-length essay A Room of One’s Own (1929), with its famous dictum, “A woman must have money and a room of her own if she is to write fiction.” Raised in a home where, due to her father’s eminence as an editor, critic and biographer and his connection to William Thackeray, writers such as Henry James, George Eliot‘s long time partner George Henry Lewes, and Virginia’s honorary godfather, the poet James Russell Lowell were among the visitors to the house, Woolf is considered a major innovator in the English language. In her works she experimented with stream-of-consciousness and the underlying psychological as well as emotional motives of characters. Woolf’s reputation declined sharply after World War II, but her importance was re-established with the growth of Feminist criticism in the 1970s. Her novels are highly experimental: a narrative, frequently uneventful and commonplace, is refracted – and sometimes almost dissolved – in the characters’ receptive consciousness. Intense lyricism and stylistic virtuosity fuse to create a world overabundant with auditory and visual impressions. Woolf’s works have been translated into over 50 languages, by writers such as Jorge Luis Borges and Marguerite Yourcenar.

After completing the manuscript of her last (posthumously published) novel, Between the Acts, Woolf fell into a depression similar to that which she had already experienced several times in her youth. On 28 March 1941, Woolf put on her overcoat, filled its pockets with stones, and walked into the River Ouse near her home and drowned herself.

A Room of One’s Own

“Chastity … has, even now, a religious importance in a woman’s life, and has so wrapped itself round with nerves and instincts that to cut it free and bring it to the light of day demands courage of the rarest.”

“If woman had no existence save in the fiction written by men, one would imagine her a person of the utmost importance (…); as great as a man, some think even greater. But this is woman in fiction. In fact, as Professor Trevelyan points out [in his History of England], she was locked up, beaten and flung about the room.

“Women and fiction remain, so far as I am concerned, unsolved problems.”

“II told you in the course of this paper that Shakespeare had a sister; but do not look for her in Sir Sidney Lee‘s life of the poet. She died young – alas, she never wrote a word. She lies buried where the omnibuses now stop, opposite the Elephant and Castle. Now my belief is that this poet who never wrote a word and was buried at the crossroads still lives. She lives in you and in me, and in many other women who are not here tonight, for they are washing up the dishes and putting the children to bed. But she lives; for great poets do not die; they are continuing presences; they need only the opportunity to walk among us in the flesh.”

“Women have sat indoors all these millions of years, so that by this time the very walls are permeated by their creative force, which has, indeed, so overcharged the capacity of bricks and mortar that it must needs harness itself to pens and brushes and business and politics.”

“When, however, one reads of a witch being ducked, of a woman possessed by devils, of a wise woman selling herbs, or even of a very remarkable man who had a mother, then I think we are on the track of a lost novelist, a suppressed poet, of some mute and inglorious Jane Austen, some Emily Bronte who dashed her brains out on the moor or mopped and mowed about the highways crazed with the torture that her gift had put her to. Indeed, I would venture to guess that Anon, who wrote so many poems without signing them, was often a woman.“

“The history of men’s opposition to women’s emancipation is more interesting perhaps than the story of that emancipation itself.”

“Women have served all these centuries as looking glasses possessing the magic and delicious power of reflecting the figure of man at twice its natural size.”

“Anything may happen when womanhood has ceased to be a protected occupation.”

“Lock up your libraries if you like; but there is no gate, no lock, no bolt that you can set upon the freedom of my mind.”

“As long as she thinks of a man, nobody objects to a woman thinking.”

“A woman knows very well that, though a wit sends her his poems, praises her judgment, solicits her criticism, and drinks her tea, this by no means signifies that he respects her opinions, admires her understanding, or will refuse, though the rapier is denied him, to run through the body with his pen.”

“I want some one to sit beside after the day’s pursuit and all its anguish, after its listening, its waitings, and its suspicions. After quarreling and reconciliation I need privacy – to be alone with you, to set this hubbub in order. For I am as neat as a cat in my habits.”

“How much better is silence; the coffee cup, the table. How much better to sit by myself like the solitary sea-bird that opens its wings on the stake. Let me sit here for ever with bare things, this coffee cup, this knife, this fork, things in themselves, myself being myself.”

“When you consider things like the stars, our affairs don’t seem to matter very much, do they?”

Attributed to Woolf in the movie “The Hours,” based on the book by Michael Cunningham:

Find more quotes by Virginia Woolf on Wikiquote and Goodreads.