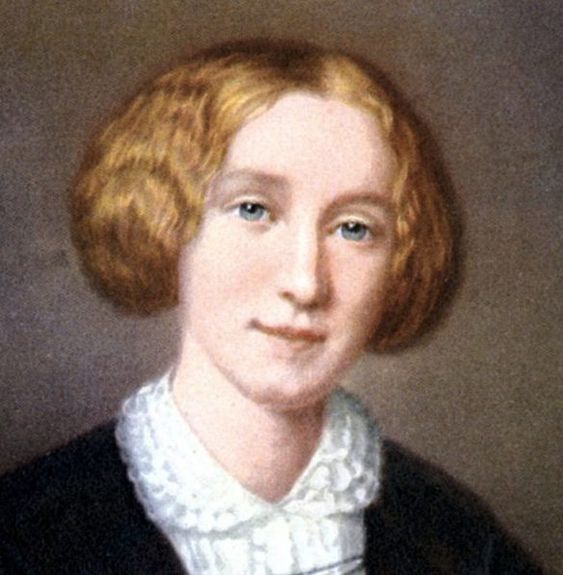 Mary Anne (alternatively Mary Ann or Marian) Evans (South Farm/Arbury Hall, Nuneaton, Warwickshire, England, November 22, 1819 – London, England, December 22, 1880), better known by her pen name George Eliot, was an English novelist, journalist and translator, and one of the leading writers of the Victorian era. She is the author of seven novels, including Adam Bede (1859), The Mill on the Floss (1860), Silas Marner (1861), Middlemarch (1871 – 72), and Daniel Deronda (1876), most of them set in provincial England and known for their realism and psychological insight.

She used a male pen name, she said, to ensure her works would be taken seriously. Female authors were published under their own names during Eliot’s life, but she wanted to escape the stereotype of women only writing lighthearted romances. An additional factor in her use of a pen name may have been a desire to shield her private life from public scrutiny and to prevent scandals attending her relationship with the married George Henry Lewes, with whom she lived for over 20 years.

Her 1872 work, Middlemarch, has been described as the greatest novel in the English language by Martin Amis and by Julian Barnes.

Middlemarch: A Study of Provincial Life

“Society never made the preposterous demand that a man should think as much about his own qualifications for making a charming girl happy as he thinks of hers for making himself happy.”

“We are all humiliated by the sudden discovery of a fact which has existed very comfortably and perhaps been staring at us in private while we have been making up our world entirely without it.”

“The memory has as many moods as the temper, and shifts its scenery like a diorama.”

“Mortals are easily tempted to pinch the life out of their neighbor’s buzzing glory, and think that such killing is no murder.”

“Confound you handsome young fellows! You think of having it all your own way in the world. You don’t understand women. They don’t admire you half so much as you admire yourselves.”

The Mill on the Floss

“I desire no future that will break the ties of the past.”

“What destroys us most effectively is not a malign fate but our own capacity for self-deception and for degrading our own best self.”

Impressions of Theophrastus Such

“Blessed is the man who, having nothing to say, abstains from giving us wordy evidence of the fact.”

Find more quotes by George Eliot on Wikiquote and Goodreads.