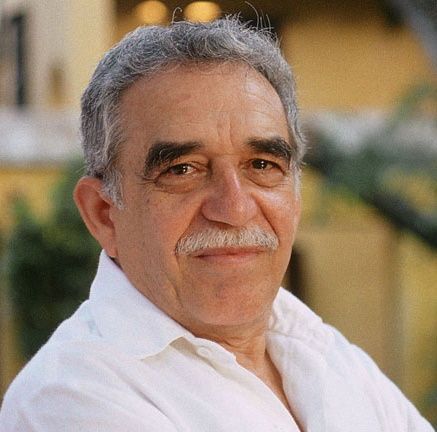 Gabriel José de la Concordia García Márquez (Aracataca, Colombia, March 6, 1927 – Mexico City, Mexico, April 17, 2014) was a Colombian novelist, short-story writer, screenwriter and journalist, known affectionately as Gabo throughout Latin America. Considered one of the most significant authors of the 20th century, he was awarded, inter alia, the 1972 Neustadt International Prize for Literature, the 1972 Premio Rómulo Gallegos and the 1982 Nobel Prize in Literature. He was the first Colombian and fourth Latin American to win a Nobel Prize for Literature.

García Márquez pursued a self-directed education that resulted in his abandoning his studies of law at the National University of Colombia for a career in journalism. From early on, he showed no inhibitions in his criticism of Colombian and foreign politics. From 1950 until 1952, he wrote a “whimsical” column under the name of “Septimus” for the local paper El Heraldo in Barranquilla. During this time he became an active member of the informal group of writers and journalists known as the Barranquilla Group, an association that provided great motivation and inspiration for his literary career. He worked with inspirational figures such as Ramon Vinyes, whom García Márquez depicted as an Old Catalan who owns a bookstore in One Hundred Years of Solitude. At this time, García Márquez was also introduced to the works of writers such as Virginia Woolf and William Faulkner. Faulkner‘s narrative techniques, historical themes and use of rural locations influenced many Latin American authors. The environment of Barranquilla gave García Márquez a world-class literary education and provided him with a unique perspective on Caribbean culture. Similarly, García Márquez’s background in journalism provided a foundational base for his writing career.

Since García Márquez was eighteen, he had wanted to write a novel based on his grandparents’ house where he grew up. However, he struggled with finding an appropriate tone and put off the idea until one day the answer hit him while driving his family to Acapulco. He turned the car around and the family returned home so he could begin writing. He sold his car so his family would have money to live on while he wrote, but writing the novel took far longer than he expected, and he wrote every day for eighteen months. Fortunately, when the book was finally published in 1967 it became his most commercially successful novel, One Hundred Years of Solitude (Cien años de soledad, 1967). The story chronicles several generations of the Buendía family from the time they founded the fictional South American village of Macondo, through their trials and tribulations, instances of incest, births and deaths. The history of Macondo is often generalized by critics to represent rural towns throughout Latin America or at least near García Márquez’s native Aracataca. This novel was widely popular and led to García Márquez’s Nobel Prize as well as the Rómulo Gallegos Prize in 1972.

The international recognition García Márquez earned with the publication of the novel led to his ability to act as a facilitator in several negotiations between the Colombian government and the guerrillas, including the former 19th of April Movement (M-19), and the current FARC and ELN organizations. The popularity of his writing also led to friendships with powerful leaders, including one with former Cuban president Fidel Castro. García Márquez has written many acclaimed non-fiction works and short stories, but is best known for his novels, such as (besides One Hundred Years of Solitude) Autumn of the Patriarch (1975) and Love in the Time of Cholera (1985). Some of his other works are likewise set in Macondo, and most of them also express the theme of solitude. His works have achieved significant critical acclaim and widespread commercial success, most notably for popularizing a literary style labeled as magic realism, which uses magical elements and events in otherwise ordinary and realistic situations. Critics often describe the language that García Márquez’s imagination produces as visual or graphic, and he himself explains that each of his stories is inspired by a visual image. While there are certain aspects readers can almost always expect in García Márquez’s writing, like instances of humour, he does not stick to any clear and predetermined style template, rather noting that his works’ respective style is determined by the subject. García Márquez is also noted for leaving out seemingly important details and events so the reader is forced into a more participatory role in the story development. For example, in No One Writes to the Colonel, the main characters are not given names. This practice is influenced by Greek tragedies, such as Antigone and Oedipus Rex, in which important events occur off-stage and are left to the audience’s imagination.

The General in His Layrinth

“Freedom is often the first casualty of war.”

Nobody Writes to the Colonel

Love in the Time of Cholera

“The usual for me.” The usual was a strong infusion of different kinds of Oriental teas, which raised her spirits after her siesta.”

As quoted in “Gabriel García Márquez: a Life” (Gerald Martin):

“All human beings have three lives: public, private, and secret.”