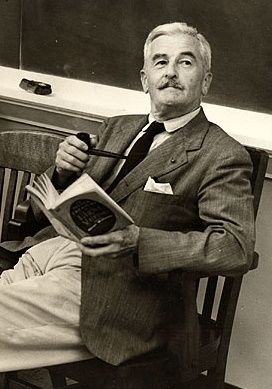 William Cuthbert Faulkner (born Falkner; New Albany, MS, USA, September 25, 1897 – Byhalia, MS, USA, July 6, 1962) was an American writer and Nobel Prize laureate from Oxford, Mississippi. Faulkner worked in a variety of written media, including novels, short stories, a play, poetry, essays and screenplays. He is primarily known and acclaimed for his novels and short stories, many of which are set in the fictional Yoknapatawpha County, a setting Faulkner created based on Lafayette County, where he spent most of his life, and Holly Springs/Marshall County.

Faulkner is one of the most important writers in the United States. He is also one of the most important writers in Southern literature in the United States, along with Mark Twain, Robert Penn Warren, Flannery O’Connor, Truman Capote, Eudora Welty, Thomas Wolfe, Harper Lee and Tennessee Williams. Though his work was published as early as 1919, and largely during the 1920s and 1930s, Faulkner was relatively unknown until receiving the 1949 Nobel Prize in Literature. Two of his works, A Fable (1954) and his last novel The Reivers (1962), won the Pulitzer Prize for Fiction.

Requiem for a Nun

“The past is never dead. It’s not even past.”

“What matters is at the end of life, when you’re about to pass into oblivion, that you’ve at least scratched ‘Kilroy was here,’ on the last wall of the universe.”

Statement at the University of Mississippi (1947)

Read, read, read. Read everything – trash, classics, good and bad, and see how they do it. Just like a carpenter who works as an apprentice and studies the master. Read! You’ll absorb it.
Then write. If it’s good, you’ll find out. If it’s not, throw it out of the window.”

“At one time I thought the most important thing was talent. I think now that – the young man or the young woman must possess or teach himself, train himself, in infinite patience, which is to try and to try and to try until it comes right. He must train himself in ruthless intolerance. That is, to throw away anything that is false no matter how much he might love that page or that paragraph. The most important thing is insight, that is … curiosity to wonder, to mull, and to muse why it is that man does what he does. And if you have that, then I don’t think the talent makes much difference, whether you’ve got that or not.”

Find more quotes by William Faulkner on Wikiquote and Goodreads.