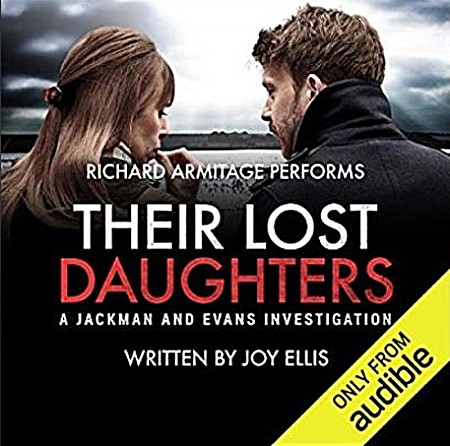 Why, oh why did anybody think that this book’s title (!!) needed an appendage such as “a gripping crime thriller with a huge twist” on Amazon (and likely thus also on every other site that draws its feed from Amazon and where there aren’t any librarians to do away with this sort of nonsense) in order to generate proper sales?!  That sort of hype is, ordinarily, a sure fire turn-off for me, and it almost would have been here, too, had Their Lost Daughters not been reviewed favorably by friends whose opinions I trust (and, cough, I admit the fact that the audio version is narrated by Richard Armitage helped as well).  As a result, I’d almost have missed out on one of the best books I read all year … and that makes me even madder at whoever was the eejit that came up with that super-hypey tag line.

Beyond the fact that this begins as a “missing girls” investigation, there is little I can say in terms of plot description that wouldn’t be a huge spoiler, so let’s just stick with the fact that Ellis draws the sombre, downright oppressing Fenlands setting very, very astutely and expressively, and her team of detectives (led by DI Rowan Jackman and DS Marie Evans) are among the most likeable, rounded, and overall believable investigators that have appeared on the mystery scene in recent years — and I also very much like Marie’s (Welsh) mother, who I hope is going to be a continued presence in the series, too.  That all said, and much as it pains me to admit it, the “huge twist” thing from Amazon’s abominable tagline is actually true: even if you think you sort of see part of the solution coming, you don’t clue into how it all hangs together until it’s unraveled right under your very nose.  (And lest anyone say the solution is too outlandish to be true, there are several real life cases published in the past couple of years that featured decidedly more gruesome facts, and which may easily have inspired this book’s solution; or at least, certain parts of it.)