John Steinbeck: Travels with Charley in Search of America 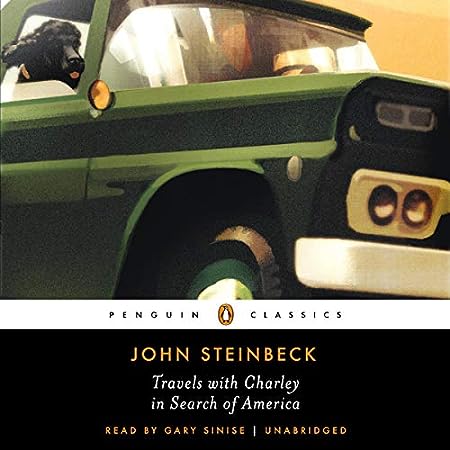 John Steinbeck has been a favorite author of mine ever since my teenage years, when I discovered (in short, though not necessarily precisely in this order) East of Eden, The Pastures of Heaven, Of Mice and Men, The Red Pony, and The Pearl, with Grapes of Wrath, The Harvest Gypsies, and Cannery Row following a few years later.  I’ve owned the Gary Sinise audio version of Shakespeare’s American travelogue for a long time; what a great book to ease myself into the Steinbeck part of the Authors in Residence challenge.  This is classic Steinbeck: forthright, acutely observed, eminently quotable (one day I’ll probably dig out my print copy and flood Goodreads or this blog — or both — with some or all of the tastier morsels), and filled with a sense of humor ranging all the way from barely watered-down acid to laugh-out-loud funny.

Of course Steinbeck and Charley don’t just discover America and its people over the course of their travels: Long before the persistent headline news about the melting of the polar ice caps and the dangers of micro-plastics there is prescient commentary on the environment and the the overuse of packaging; as well as on the ever-pressing status of immigrants and foreign labor (Steinbeck home territory ever since César Chavez, The Harvest Gypsies and The Grapes of Wrath, but here expanded to other parts of the country; including and in particular, rural New England and the Canadian border), on the embarrassments and occasionally unfair advantages of being a celebrity, and about the things you can learn about people from what they leave behind in their hotel rooms.  (All I’ll say on this is, Sherlock Holmes would have approved and would have found Steinbeck in possession of at least “two out of the three qualities necessary for the ideal detective”, namely, “the power of observation and that of deduction” (cf. The Sign of Four) — and I’m only partly joking here; there really is something very much Sherlockian about that particular reconstruction of one unknown gentleman’s stay at a Chicago hotel.)

I haven’t made up my mind yet which one of Steinbeck’s books to pick up next, but even within the context of his oeuvre, Travels with Charley will be an excessively hard act to follow.

One thought on “John Steinbeck: Travels with Charley in Search of America”