John Steinbeck: The Moon Is Down 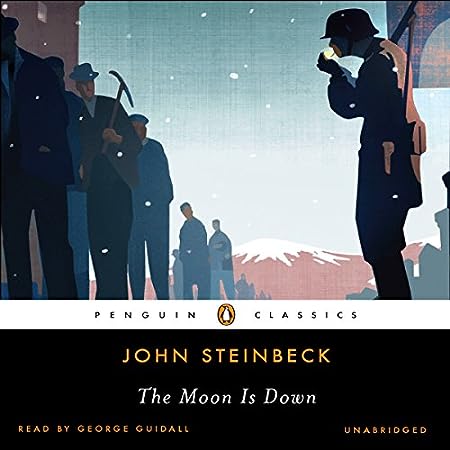 My final venture into John Steinbeck’s oeuvre in the context of the (Dead) Authors in Residence challenge, and once more I found confirmation of everything that made me a fan of Steinbeck’s all the way back in my teens: vision and prescience of judgment, exquisitely fine characterization and, perhaps most of all, infinitely great humanity.

Although set in a small fictional English-speaking mining community, The Moon Is Down was actually inspired by the German invasion of Norway towards the beginning of WWII.  Originally conceived as a play and widely read in occupied Europe, in 1946 it won Norway’s King Haakon Liberty Cross; and arguably, no honor could have been a more appropriate match for the work’s passionate plea for freedom — individual and collective — and democracy in the face of terror.

“Free Men cannot start a war, but once it is started, they can fight on in defeat.  Herd men, followers of a leader, cannot do that, and so it is always the herd man who win battles and the free men who win wars.  You will find that is so, sir,”

the occupied town’s Mayor tells the commander of the occupying troops, and when his wife protests that they can’t arrest the Mayor, he adds:

“No […] they can’t arrest the Mayor.  The Mayor is an idea conceived by free men.  It will escape arrest.”

Authoritarianism and the leadership crystallized in the person of a dictator like Hitler and Mussolini, in other words, is destined to fail.  Only freedom and democracy, and a leadership institution filled by successive, temporarily- and freely-elected office holders, is bound to survive. “The moon is down; I have not heard the clock,” Banquo’s son Fleance says in Shakespeare’s Macbeth: darkness is bound to descend on Scotland, but although Banquo is murdered, Fleance survives, and it was to Fleance that later generations of rulers (including the Stuarts, who a few years before Macbeth was written had also inherited the English throne) mythologically traced their origins — so the impending dark days are temporary, Shakespeare says; there is light at the end of the tunnel.  And of course Steinbeck, borrowing Shakespeare’s image for the title of this 1942 novel, would be proven right within a matter of three years.

Although The Moon Is Down was the final book I read in the context of the Authors in Residence project, I am glad the discussion group’s Steinbeck threads will be kept open, as revisiting his work over the past three months has inspired me to extend that revisit and build other books by Steinbeck into my reading for the rest of the year, both books that I’m not yet familiar with and rereads of past favorites.  I may not agree with (or even understand) the Nobel Committee’s every choice for the Nobel Prize in Literature over the course of the past century, but in Steinbeck’s case I wholeheartedly agree, and although he more than earned the award on the basis of The Grapes of Wrath and East of Eden alone, even if he had written neither book, the award would still be justified in light of exquisite pieces of fiction like this one.  In awarding the 1962 prize to John Steinbeck, the Nobel Committe praised “his realistic and imaginative writings, combining as they do sympathetic humour and keen social perception,” and Steinbeck responded in his acceptance speech:

“Literature was not promulgated by a pale and emasculated critical priesthood singing their litanies in empty churches – nor is it a game for the cloistered elect, the tinhorn mendicants of low calorie despair.

Literature is as old as speech. It grew out of human need for it, and it has not changed except to become more needed.

The skalds, the bards, the writers are not separate and exclusive. From the beginning, their functions, their duties, their responsibilities have been decreed by our species.

Humanity has been passing through a gray and desolate time of confusion. My great predecessor, William Faulkner, speaking here, referred to it as a tragedy of universal fear so long sustained that there were no longer problems of the spirit, so that only the human heart in conflict with itself seemed worth writing about. […]

The ancient commission of the writer has not changed. He is charged with exposing our many grievous faults and failures, with dredging up to the light our dark and dangerous dreams for the purpose of improvement.

Furthermore, the writer is delegated to declare and to celebrate man’s proven capacity for greatness of heart and spirit – for gallantry in defeat – for courage, compassion and love.

In the endless war against weakness and despair, these are the bright rally-flags of hope and of emulation.

I hold that a writer who does not passionately believe in the perfectibility of man, has no dedication nor any membership in literature.

The present universal fear has been the result of a forward surge in our knowledge and manipulation of certain dangerous factors in the physical world.

It is true that other phases of understanding have not yet caught up with this great step, but there is no reason to presume that they cannot or will not draw abreast. Indeed it is a part of the writer’s responsibility to make sure that they do.”

The Moon Is Down is a testament to this belief of Steinbeck’s at least as much as The Grapes of Wrath, Cannery Row, and East of Eden. — as well as my previous two reads in the context of this project, Travels With Charley: In Search of America and The Winter of Our Discontent.