Ellis Peters: Fallen into the Pit 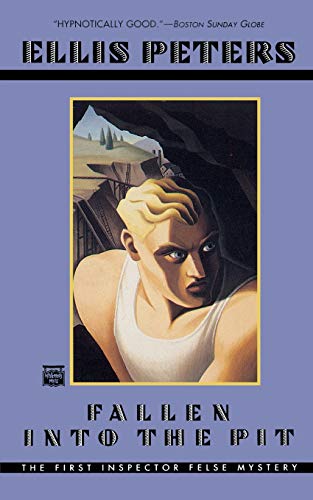 The “Appointment with Agatha” group actually selected Dorothy L. Sayers’s The Nine Tailors as its official March 2021 side read, but as that is one of my favorite novels by Dorothy L. Sayers and one of my annual Christmas reads, I opted for the runner-up, Ellis Peters’s first “Felse investigation” instead.  And I am so glad that I did!

Next to Brother Cadfael, George Felse and his son Dominic are Ellis Peters’s best-known series protagonists.  George Felse is still a police sergeant in this book, Dominic is on the point of entering teenage life; yet, with higher-ranking police inspectors only to be found in the next market town, it falls to George Felse to do the legwork on this book’s investigation (he will be promoted to inspector later in the series) — though virtually all clues, including the final one, are provided by Dominic (much to George’s chagrin, both as a parent and as a policeman).

The book is set in a coal mining village on the Welsh boarder (presumably in Peters’s native Shropshire) shortly after the end of WWII; and Peters had me virtually from the word “go”, with a highly insightful rendition of postwar life in a small rural community, where the lives of those who have experienced the war in the confines of the village have to be harmonized with the war experience of the returning soldiers (and vice versa), and the former soldiers, in trying to find their way back into civilian life, have to somehow come to terms with the horrors they have seen — and in part, themselves committed — on the battlefield and otherwise as active participants of a war that they hadn’t even wanted to join in the first place.

And as if these weren’t complexities enough for the village population to deal with, further contentions arise out of a dispute over coal mining rights on a piece of land owned by one of the pillars of the village community and, particularly, in connection with the unsettling personality of a German ex-prisoner of war who has remained in the village after the end of his detention: a man who has never abandoned his Nazi ideology and beliefs; the perfect example of the type of personality sometimes described as a “cyclist” — bending his back, wheedling and subservient in the face of authority, but a vicious bully only too happy to kick and trample down on any- and everybody whom he perceives as weaker than himself; yet clever enough to turn any situation to his own advantage and make himself appear as the victim if caught in an altercation.  In other words, the kind of person who, in a mystery, you’re just waiting to be killed — and when he is, there is no shortage of potential suspects.

Peters brings to George Felse’s investigation the same sensibilities that also characterize her Cadfael novels; what I particularly appreciated, though, was the way in which she shows that while the Nazi bully’s death at first blush seems to be a benefit to the community, it really isn’t, because as long as the murderer hasn’t been found, everybody remains under suspicion, including each and every innocent member of the village population (i.e., 99+%) — a point that Agatha Christie repeatedly makes as well (most notably in Ordeal by Innocence).  As it is, the murder threatens to pull the community apart even more than the uneasy postwar situation and the dispute about mining rights are already doing anyway; it soon becomes clear that only the discovery of the murderer will allow the community to heal once and for all.  So Felse is caught in the dilemma of not wanting to have to charge any of his friends and neighbors with murder — he likes them, and they really are, all of them, extremely likeable people — and knowing, at the same time, that he really wouldn’t be doing them any favor if he were to drop the investigation and refrain from rummaging about in their private lives.  Then a  second murder happens, and it is ultimately this second murder (as well as the identity of the murderer) that drives home the point that even the apparent benefit which the first murder seemed to bestow on the community (by removing, once and for all, the vicious bully in its midst) really was no benefit at all: not only did it end up causing additional rifts instead of healing the existing ones, it was not committed with the mistaken intention to benefit the community in the first place.

If I’m withholding a half-star rating from the full five stars I’d otherwise much have liked to give the book, it’s because not only is it Dominic Felse (not his father, the police inspector) who makes virtually every important discovery; and moreover, every single one of his discoveries is an accidental one — altogether decidedly too much reliance on the element of chance on the part of the author.  I hope the series’s first book is not setting a pattern as far as this is concerned; if it is, the subsequent novels are almost certainly going to get a lower rating on this score alone.  — That said, I’d initially contemplated moving onto the next installments of the series immediately, but found that the only characters who make a reappearance there are the Felses themselves (George, Dominic, and George’s wife / Dominic’s mother Bunty), and while I genuinely like all three of them, I was sorry to find upon sneak-peeking that none of my other favorite characters in this book — PTSD-scarred classics master turned wartime expert assassin turned, once again, classics master Chad Wedderburn and Dominic’s almost-love-interest, a girl with the impossibly 1950s nickname “Pussy” — are featured in the next books.  So I’m going to wait a little, after all, until I’ll join the Felses for their next investigation, but I’m definitely going to be back for more eventually.