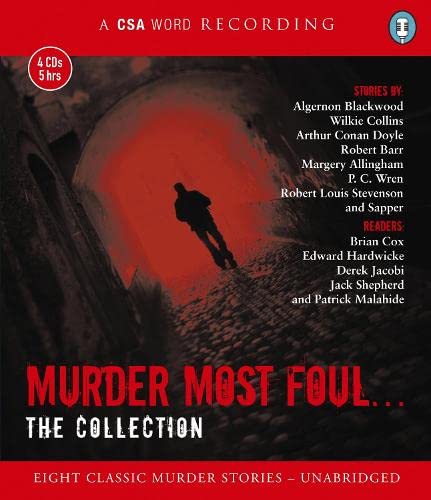 This is a collection of eight short stories by different authors, read with great aplomb by five well-known British actors.  It starts of with Bluebeard’s Bath by Margery Allingham — read by Patrick Malahide –, a “non-Campion” twist on the black widow trope (the twist being, as the title implies, that here it’s a black widower: the story is obviously inspired by the infamous real life “Brides in the Bath” case), which derives most of its suspense from the fact that it is told from the murderer’s perspective. — 4 1/2 stars for this story individually; it’s one of the strongest of this lot.

Next is Wilkie Collins‘s Who Killed Zebedee? (read by Derek Jacobi), which concerns the death of a lodger in an apartment house, and a would-be accidental amateur sleuth’s attempt to clear the woman with whom he is infatuated from the suspicion of murder. (3 stars, individually — Collins himself could do better, and the story doesn’t really measure up to the rest of this collection, either.)

The third story is An Alpine Divorce by Robert Barr (read by Brian Cox), where a married couple that has come to secretly hate each other’s guts vacations in the Alps … with starkly differing notions as to how those vacations are supposed to end, and with a deliciously-executed evil twist at the end. — Easily 4 stars.

Barr’s story is followed by Edward Hardwicke‘s reading of Arthur Conan Doyle‘s The Speckled Band: Although overall I prefer the Derek Jacobi and Stephen Fry readings of the Holmes canon, it’s always a true pleasure, too, to have a story narrated by the actor who was Watson to Jeremy Brett’s Holmes for the better part of my personal “Sherlock Holmes to end all Sherlock Holmes” series, and certainly nobody nails Holmes’s occasionally strident tone as well as the man who was at the receiving end of that very tone for a considerable amount of time (even though in real life Brett and Hardwicke got along like a house on fire, and when Brett’s illness reared its ugly head, Hardwicke was the first to be protective of him). — I already own several collections of Sherlock Holmes stories read by Hardwicke, and this reading nicely complements those collections. (5 stars — this is a stand-out even in Conan Doyle’s amazing body of work.)

The next story is probably my favorite of the lot — next to the Holmes entry, obviously, and with Allingham’s offering not far behind: P.C. Wren‘s The Perfect Crime (read, again, by Brian Cox), which is based on the explicit premise that yes, “there is in fact such a thing as the perfect crime: I know, because I have committed one.”  As in Allingham’s story, the chief element of suspense is derived from the fact that the story is told strictly from the murderer’s perspective, and again similar to Allingham’s story, the plot is constructed so as to slowly and deliciously peel away layer by layer, with a slow burn that ends in a supremely devious final twist. — 5 solid stars as well.

The final three stories (like Wilkie Collins’s) are made of weaker stuff than the three highlighted above in particular:

Sapper‘s Thirteen Lead Soldiers (again read by Edward Hardwicke) is a story from the “Bulldog Drummond” canon whose crucial twist turns, as the title implies, on a collection of toy soldiers that one participant of a secret meeting of high-ranking international diplomats (to which Drummond has been invited at Scotland Yard’s suggestion in an effort to highten security) has made for and gifted to the hosting nobleman’s son.  This is both a “whodunit” and a “howdunit” — where Drummond manages to foil the murderer’s intentions to rather lasting effect — and though I didn’t care enough to try and unravel every last detail of the solution in advance, both “whodunit” and the basic outline of “howdunit” are fairly easy to work out. (3 1/2 stars, individually.)

Algernon Blackwood‘s First Hate (read by Derek Jacobi) is based on the contention that, just as there is such a thing as love at first sight, there is also such a thing as purely instinctive “hate at first sight” — quod erat demonstrandum by way of an “around the fireplace” narration of just such an encounter, with a competition for the hand of a woman thrown in as a sideline (or as a more plausible motive?  I couldn’t make up my mind which was which, and ultimately didn’t care), and with an ending high up in the Canadian Rockies — where the story moves from its London beginnings — that for all practical purposes amounts to cold-blooded murder dressed up as self-defense … unless you buy into the central premise, which I manifestly don’t.  (Jacobi doesn’t seem to, either; this is definitely not one of his most convincing narrations, and coming from someone who’d willingly listen to him reciting the phone book, that should tell you something in and of itself.) — 2 1/2 stars, because I’m feeling generous and because Blackwood still knows how to tell a story, even if it’s a supremely implausible one.  Also, um, Derek Jacobi.

Finally, Robert Louis Stevenson‘s Markheim (read by Jack Shepherd) is highly atmospheric and skillfully constructed until about its halfway point (or shortly thereafter): It starts with a customer’s (the eponymous Markheim’s) visit to a pawnbroker’s store on Christmas Eve and the exchange between the customer and the pawnbroker, which after a short while ends in murder.  There’s a nice, slow build-up to the murder itself (which build-up even includes an adroitly-executed slight of hand), and a further slow burn while the murderer is rifling the shop and trying to cover his tracks.  However, then we literally get a deus ex machina appearance that radically changes the state of play, and unfortunately that was the point where Stevenson lost me. — 3 1/2 stars, chiefly for the story’s first part; a writer of Stevenson’s caliber shouldn’t have needed (or even explicitly sought) any deus ex machina, and certainly not this one; not even in a story set on Christmas Eve.