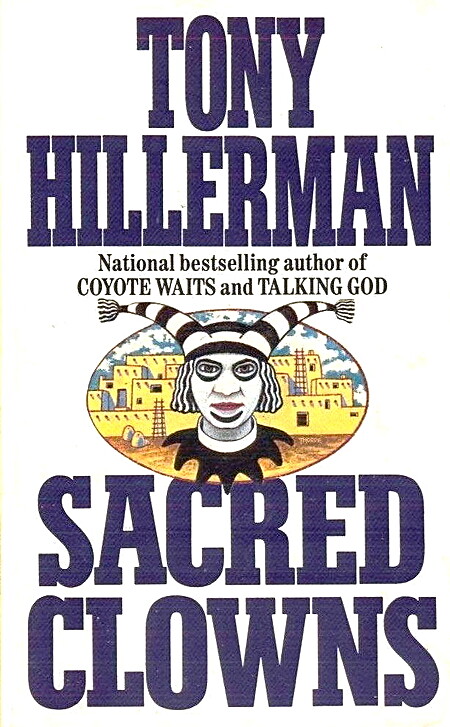 One of the Biggest Highlights in an Outstanding Series

Against his editor’s counsel, Tony Hillerman switched from nonfiction to fiction writing over 30 years ago, with a story ultimately entitled “The Blessing Way;” introducing an (at the time) new type of hero and a new setting to the realm of the mystery novel – a Navajo policeman named Joe Leaphorn and the world of the Diné, i.e. [Navajo] “people,” living on the rugged plains, deserts and mountain ridges of the southwestern Four Corners Country. From the first book on, Hillerman’s novels drew in equal parts on the author’s natural gift as a storyteller, his upbringing within and hence, intimate knowledge of the world he describes, and his training as a writer; all of these elements blending into fascinating storylines and vivid and accurate portrayals of the land and its people.

Based on the success of his Leaphorn series, Tony Hillerman then created a new hero and (initially: a second) series set in Dinetah (Navajo country): tribal policeman Jim Chee. But while Joe Leaphorn was married and methodical and seemed, over the course of the years, to have found a way to harmonize Navajo traditions and 20th century American life, the younger Chee, unmarried, initially trained to be a shaman and deeply traditional, yet at the same time drawn to women living in the white man’s world, was struggling to find that same sense of balance.

Whether or not Hillerman’s unequal heroes were always meant to meet, they eventually did so in “Skinwalkers” and have been solving crimes together ever since, and their disparate tempers and approaches to police work add another level of tension to the stories, in addition to the cultural differences between the Navajo and the world(s) surrounding them, and the tribal policemen’s perpetual clashes with the federal authorities. In more than one novel, Hillerman transcends the world of the Navajo, bringing in and contrasting to it the views and traditions of other tribes of the Southwest, not all of them historically on friendly terms with the Navajo (e.g. the Hopi in “The Dark Wind,” the Ute in “Hunting Badger” and the Zuni in “Dance Hall of the Dead”). In “Sacred Clowns,” Chee and Leaphorn (who has long since gained a reputation as the “Legendary Lieutenant”) must delve into the society of Tano Pueblo to solve the murder of a teacher at a Navajo school, which seems to be connected to a death in the pueblo. As they dig through layers and layers of secrets, they again face the skepticism of a society that has had its “issues” with the Diné in the past. Yet, they slowly unravel the mystery surrounding the Kachina dancers (“sacred clowns”) at the heart of the story and finally come to an, as always, surprising conclusion.

If you have never read a book by Hillerman and it’s important to you to get to know the main characters of a series as they develop over the course of time, you’ll have no choice but to go all the way back to “The Blessing Way” and read your way through to this particular book (which in a way makes sense, of course and, given the caliber of these stories and their author, should be a lot of fun, too). But like every good writer, Hillerman provides enough background for Leaphorn and Chee for even a first-time reader to be able to understand and appreciate his heroes and the things that drive them from the context of any of their stories – and I’ll almost guarantee that this won’t remain your only Hillerman book for a long time anyway: you’ll be hooked midway through the tale at the very latest and will want to know more about the Legendary Lieutenant, Sergeant Chee and their people as soon as possible and before long, will find yourself swallowing every other book about them, too. Oh, by the way … they kept working together, never mind that Joe Leaphorn retired from the police at some point later in the series. Yet, while I have no doubt that whatever books by Hillerman you pick up will all be good reads (there isn’t one weak book in the entire series), “Sacred Clowns” will forever remain one of my favorite stories about Lieutenant Joe Leaphorn and Sergeant Jim Chee.