Shaun Bythell: Seven Kinds of People You Find in Bookshops 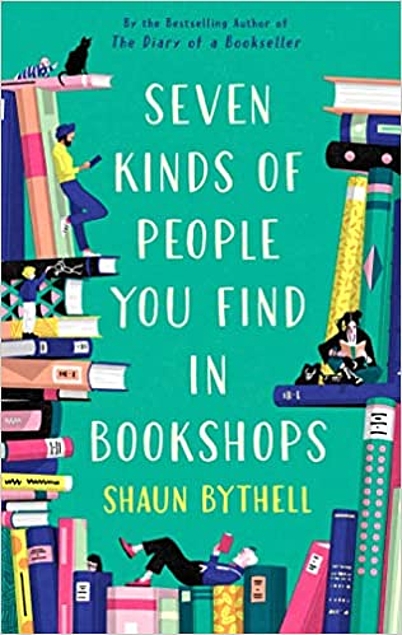 Shaun Bythell: Seven Kinds of People You Find in Bookshops

This was actually a holdover from February — I had already started the book once but stopped reading after chapter 1, teetering on the verge of a DNF, before ultimately deciding “just finish it; it’s short, what the heck” one Sunday morning in early March when I had awoken uncharacteristically early and didn’t feel like getting up just yet.

I had bought this book as a sort of test balloon for Bythell’s first two (longer) books, of which I had read excerpts, but not yet the full-length works.  The bottom line is that I can see this sort of thing working as a series of blog posts (which is in fact where Bythell’s first book originated) — i.e., essentially opinion pieces of a highly personal nature that are typically (except if written by a bestselling author) only read by a circumscribed audience, even if that audience comprises a few thousand or even a several ten thousand readers (as it may do with successful bloggers).  But as a book — something addressed to a much wider public than most blog posts?  Well, let’s just say that at least this specific book ended up confirming all of the things I had feared wouldn’t work for me.  And this may very well be a(nother) matter of “it’s not you, book, it’s me”.  Anyway, though, we all have our professional ethics; and by those governing my line of work, and which have formed my way of thinking for the past several decades, what Bythell does here (essentially, “classifying” customers and either moaning about them or setting them up for ridicule — in part collectively, but in more than one case with a high degree of individual recognizeability, too, at least for others who actually have met these people in turn) would be highly unethical in my line of work.  You obviously don’t have to like your clients, neither individually nor collectively; and yes, there certainly are plenty of “awful client” (and “awful judge”, “awful colleague”, etc.) stories that lawyers can and do tell, too; it’s a large part of what passes for “talking shop” — behind closed doors and while shielding the portrayed pesons’ privacy and studiously omitting from the narration any individual features that would make the people concerned recognizable.  Yet, the simple truth is that (especially if, like Bythell, you own the business you’re running) these are the people who are paying for everything from your daily meals to your mortgage, your car, and your kids’s school (if you have children), not to mention being essential to the survival and future of your business.  And if you dislike 7 out of 8 of these people as much as Bythell seems to do, for all the purportedly satirical nature of his description (the only good, indeed, the “perfect” customer is tagged onto the seven more or less awful or ridiculous kinds as an afterthought in the postscript), then maybe, just maybe it’s not just the customers but you yourself, too.  Because surely for a lover of books there must be other jobs in the book industry where you don’t have this amount of exposure to the worst that the reading, or the book-buying, or the seeking-shelter-inside-a-bookstore-without-buying-anything public has to offer?

Again, I do realize that this is intended as satire (even as lighthearted satire), Bythell himself acknowledges — in all sincerity, too — the basic unfairness of the very categorization he is undertaking, and as I said, I can actually see this sort of thing working well for me as a series of blog posts: Hey, which book lover (and which lover of the absurd) doesn’t enjoy the occasional eyeroll-inducing anecdote about encounters with illiterate or otherwise annoying people who, for whatever inconceivable reasons, have blundered into a bookstore?  (Not least because that sort of thing makes us all feel soooo superior about ourselves and our own erudition …)  This is true all the more to the extent that being fed individual anecdotes also means that we don’t have to wonder constantly where in these seven circles of a bookseller’s hell we personally might end up finding ourselves.  But there is something about Bythell’s tone in this book that, together with the highliy individualized and fact-specific nature of his narration, simply negates the purportedly lighthearted approach, and which makes me suspect that he does “mean it”, after all — maybe not all of it, but enough, and in essence he is thus simply venting.  Nevertheless I will probably, at some point, give at least one of his longer books a try, too, in order to see whether the longer books have more to offer than even more tales of a bookseller’s woe.  But I doubt that it will be anytime soon.