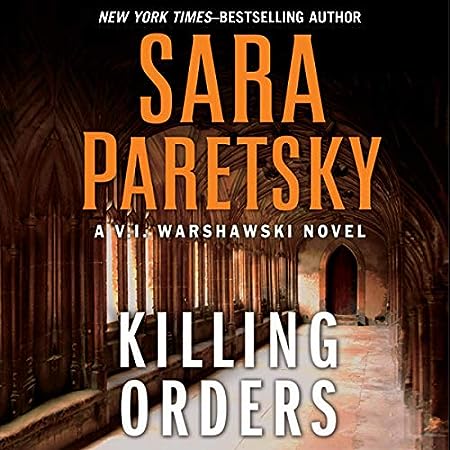 Killing Orders, V.I. Warshawski’s third adventure, starts when her great-aunt Rosa summons the detective to her cold suburban home. Rosa made V.I.’s childhood miserable and the detective resents the command to help her aunt prove she didn’t embezzle five million dollars from a local Dominican priory.

All hell breaks loose when a mysterious opponent tries to take Vic off the case by throwing acid in her eyes and burning down her apartment. And when a friend who’s involved in the case is brutally murdered, it begins to look as if Vic hasn’t got a prayer.

But Warshawski continues to follow every lead, even when they point to some pretty unorthodox conclusions: Perhaps the Dominicans are covering up a financial scandal. Maybe the whole conspiracy is under the patronage of an international conglomerate, or of Don Pasquale, king of the Chicago mob. Worst of all, someone who’s close to Vic could be involved — her darkly handsome English lover, Roger Ferrant, or even Aunt Rosa herself.

Paretsky takes on Opus Dei (under a fictitious name, of course) and she does it in her accustomed style and much more successfully than Dan Brown does in The Da Vinci Code. I’ve read several of the later installments of the V.I. Warshawski series, but I’m glad I decided, a few years ago, to go back to the series’s early novels and read them in order. This is one series that hit the ground running and only kept getting better.