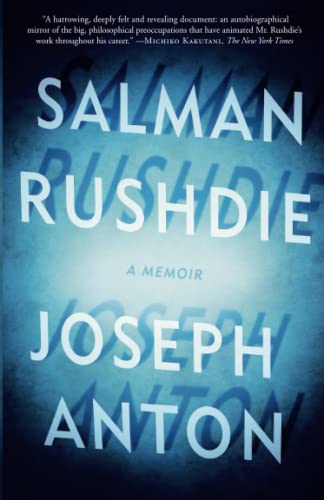 Belated Happy Birthday. I don’t know how much satisfaction there is to you, these days, in having reached an age which the Ayatollah Khomeini and his acolytes never wanted you to reach, but anyway, since I happen to have been reading your memoir of the fatwā years while you were celebrating your 69th, wishing you well on the occasion of your birthday just seemed in order.

Now having said that, could you please enlighten me as to just what the flying f*ck is up with that third person narrative voice of Joseph Anton? The book is subtitled “a memoir,” for crying out loud, and that’s precisely what it is – the memoir of one Salman Rushdie, author, of the years when he had to deal with a death order issued against him, for having written a book allegedly offensive to Islam, issued by the supreme religious leader of Iran (notice my not putting that in caps, as a title is wont to be) and loudly propagated throughout the entire Islamic world. It is not, in other words, the would-be memoir of one Joseph Anton, like the characters of the much-maligned Satanic Verses a figment of their author’s imagination; an alias composed from the names of two of your own favorite novelists (Joseph Conrad and Anton Chekhov) and slipped on like an ill-fitting glove that you couldn’t get rid of again soon enough, or would have, if Special Branch and the Home Office had let you. It is not the memoir of “Rushdie,” the maligned author, separated in public opinion – who for obvious reasons were widely ignorant of the mere existence of Mr. Anton – from the Salman you were privately struggling to remain. It is the memoir of precisely that last person: You, Salman – Salman Rushdie –, proud bearer of a last name that your father had intentionally styled on that of the 12th century sage Ibn Rushd (Averroës) for his enlightened views on religion, and on the world in general. And that being the case, the third person narrative voice of your memoir startled the hell out of me right from the very beginning and remained the one jarringly discordant note until the very end.

“When a book leaves its author’s desk it changes. Even before anyone has read it, before eyes other than its creator’s have looked upon a single phrase, it is irretrievably altered. It has become a book that can be read, that no longer belongs to its maker. It has acquired, in a sense, free will. It will make its journey through the world and there is no longer anything the author can do about it. Even he, as he looks at its sentences, read them differently now that they can be read by others. They look like different sentences. The book has gone out into the world and the world has remade it.”

Very astute: Once a book has been published it no longer belongs to its author alone, but to all of us readers, too. (I actually wish there were more authors, particularly these days, who share that feeling.) But that’s not really the point here, is it? Because the story doesn’t change. And the story isn’t that of Mr. Anton, publisher of vaguely international extraction (as his landlords in London would be told by his representatives), nor of “Rushdie,” the first-nameless author of “that terrible book,” but – pardon me for harping on it – it’s your own story. And to be told that story in the third instead of the first person just didn’t feel right, however much you may be distancing yourself in your own mind from the “Joseph Anton” as who you had to accept being addressed even by the protection officers with whom you interacted daily, so as to make it easier for them to think of you as Joe and not accidentally slip in a “Salman” when speaking of you. It seems to me that writing this book actually played a large part in your personal reconciliation with those years. Even more so would it have made sense, then, to be written in the first person: which I suspect (and conjecture from at least one instance of a perceivable slip-up in the transition from “I” to “he”) it actually has been, initially. Then why, in the name of everything that is precious (I won’t use the word “holy” around you), the switch back to a third person narrative perspective that is so clearly in discord with the narration itself?

It’s a heartfelt book, full of the wit, sense of humor, passion and irony, and the trenchant analysis that I’ve come to love in everyone of your works, fiction and nonfiction alike. I won’t even try to imagine what daily life during those years must have been like for you, because I’m pretty sure whatever I can conjure up will still be woefully short of the real thing. (For some reason, probably because of the framework setting of The Moor’s Last Sigh, I’d always vaguely imagined your hiding place to be somewhere in Spain. Should have figured it had to be somewhere where the British authorities actually had the power to protect you, which obviously meant somewhere right in Britain.) It was also tremendously enlightening to read about the important role that some of the leading lights of the British and international literary scene have played in, variously, shielding you and supporting your cause for well over 10 years; even if I do admit to considerable envy of your ability to name-drop the likes of Paul Auster, Siri Hustvedt, Bruce Chatwin, Günter Grass, Václav Havel, Harold Pinter, Antonia Fraser, Martin Amis, J.M. Coetzee, Robyn Davidson, Carlos Fuentes, Ian McEwan, John Irving and plenty of others, not merely repeatedly but sometimes even in the same sentence or paragraph. My envy is even greater, though, for the fact that you actually have read, and are able to discuss in the most everyday, matter-of-fact tone, more than half of the literary masterpieces that are still languishing on my TBR shelf, which I know I should have read ages ago, too, and am promising myself to do just that on a regular basis – without however actually making much progress in the matter.

So yes, I certainly am glad I have read Joseph Anton: It answered a lot of questions I would have had of you if I ever had the privilege of meeting you in person, it shed light on plenty of things that wouldn’t even have occurred to me but for your discussing them, and it reinforced my belief that, albeit on the grounds of circumstances that I personally wouldn’t wish on my very own worst enemy, yours is one of the most important voices to be heard these days, on the issues of religious fundamentalism, racism, and freedom of speech, as well as the state of the world at large.

I still would have wished for your memoir to be written in the first person, however. That third-person distancing, to me, made the experience just that tiny fraction of a degree less than it could, and absolutely should have been.

“Nobody ever wanted to go to war, but if a war came your way, it might as well be the right war, about the most important things in the world, and you might as well, if you were going to fight it, be called “Rushdie,” and stand where your father had placed you, in the tradition of the grand Aristotelian, Averroës, Abul Walid Muhammad ibn Ahmad ibn Rushd.”

“This was what book reviewing did.  If you loved a book, the author thought your praise no more than his rightful due, and if you didn’t like it, you made enemies.  He decided to stop doing it.  It was a mug’s game.”

“This was the literature he knew, had always known.  Literature tried to open the universe, to increase, even if only slightly, the sum total of what it was possible for human beings to perceive, understand, and so, finally, to be.  Great literature went to the edges of the known and pushed against the boundaries of language, form, and possibility, to make the world feel larger, wider, than before.  Yet this was an age in which men and women were being pushed toward ever-narrower definitions of themselves, encouraged to call themselves just one thing, Serb or Croat or Israeli or Palestinian or Hindu or Muslim or Christian or Baha’i or Jew, and the narrower their identities became the greater was the likelihood of conflict between them.  Literature’s view of human nature encouraged understanding, sympathy, and identification with people not like oneself, but the world was pushing everyone in the opposite direction, towards narrowness, bigotry, tribalism, cultism and war.  There were plenty of people who didn’t want the universe opened, who would, in fact, prefer it to be shut down quite a bit, and so when artists went to the frontier and pushed they often found powerful forces pushing back.  And yet they did what they had to do, even at the price of their own ease, and, sometimes of their lives.”

“When a book leaves it’s author’s desk it changes. Even before anyone has read it, before eyes other than its creator’s have looked upon a single phrase, it is irretrievably altered. It has become a book that can be read, that no longer belongs to its maker. It has acquired, in a sense, free will. It will make its journey through the world and there is no longer anything the author can do about it. Even he, as he looks at its sentences, reads them differently now that they can be read by others. They look like different sentences. The book has gone out into the world and the world has remade it.”