Well, that went to hell in a handbasket (or close to it) pretty fast — and it had such a promising beginning!

But either there is a major flaw in the plotting, or it’s clear ever since page 95 who was responsible for the death occurring on pages 91-94.

And yet, this fictional version of Giordano Bruno, an eminent scholar and scientist who in real life would, himself, eventually come to be burned at the stake for heresy, has spent the majority of the last 235 pages traipsing around Oxford like a headless chicken, ignoring even the most blatant clues — and all the while I can’t shut up the voice of Sherlock Holmes in my head: 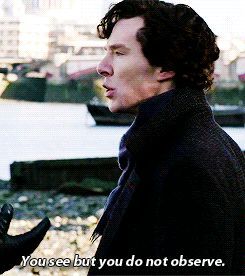 More spoilers hereafter: Essentially this book is a failed exercise in copying and pasting from the established masters.

And it certainly also doesn’t help that in the very first scene following the first death the guilty party is getting rid of a witness (of sorts) in the same way that the murderer does in Ellis Peters’s fourth Chronicle of Brother Cadfael, St. Peter’s Fair.

Nor that this person is conspicuously absent during one of the novel’s key events, where they should have been present along with all of their peers — and during which time, in fact, a second murder is committed.  Nor that for this second murder, the murderer is providing himself with an alibi in the same way that it’s done in Agatha Christie’s The Murder at the Vicarage.

Nor that the whole “forbidden book” subplot has distinct overtones of Umberto Eco’s The Name of the Rose.  (I know forbidden books were a dime a dozen in the Middle Ages and the Tudor Era, but dear God, can we please have something more inventive than allegedly nonexisting / destroyed books being secreted away by a librarian of a closed community (a monastery in Eco’s book, an Oxford college here)?

C.J. Sansom showed in Lamentation that it can be done …

So no, Mr. Iggulden, contrary to your laudatory blurb, not only can Brother Cadfael easily hold a whole chandelier to this — he’d also have solved this case in a fraction of the time it’s taking this book’s fictional version of Giordano Bruno.  So would Miss Marple.  So would William of Baskerville.  So would Matthew Shardlake — don’t anybody tell me that this is anywhere near legitimate competition for that particular series, either. (Looking at you, cover blurb writer Sam Bourne.)

And did I mention Sherlock Holmes?