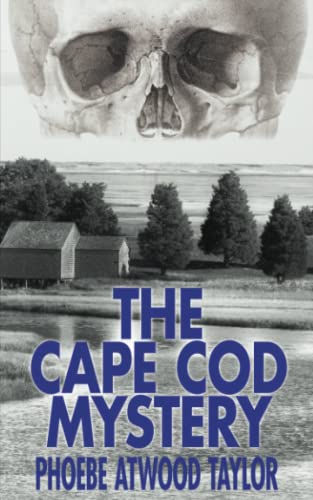 The Appointment with Agatha group’s January 2022 side read: my first book by Atwood Taylor (though I’d heard her name before) and almost certainly not my last one.

I’m not entirely sold on the main investigator, Asey Mayo; he comes across as rather too mannered and the book might have benefitted if the first person narrator (an intelligent female version of a Watson, written with a delightfully light touch) instead of Asey had done the sleuthing — Atwood Taylor had enough writerly chops to have been able to pull this off while still maintaining her first person narrator’s persona without either getting too bogged down in the details or coming across as too unbelievably smart. In fact, hiding Asey’s obvious brains under a lot of mannerisms and excessively colloquial speech patterns is precisely what didn’t work for me, even taking into account his unusual background, or what we’re allowed to learn about it. (Also, even though Atwood Taylor goes to some length, when introducing him, to point out that “his r was the ah of New England” and “his a was so flat that … you couldn’t get under it with a crowbar,” by and large his speech patterns strike me as more reminiscent of a blend of Southern and Midwestern parlance, so in this instance I sort of regretted not having an audiobook on hand — I would have loved to hear an American actor’s take on his way of speaking.) And, finally, I kept wondering whether we had to have quite such an inanely stupid local sheriff by way of an excluse for the amateur sleuths getting in on the act to begin with.

MC issues out of the way, I really liked the author’s description of Cape Cod as a 1930s’ vacation destination for the more well-to-do denizens of Boston and New York City, mingling effortlessly with the equally well-heeled representatives of local society: it’s clear that she was very familiar with the setting. The plotting is a nice hunt for clues, I suppose, if you don’t approach the book with the expectation that Atwood Taylor will abide by Golden Age detective fiction rules; if you do, however, you’ll almost certainly be able to pick the culprit very, very early on, and you’ll then have to wait until the overall resolution to find out just why you are correct (most of the hunt for clues, in effect, comes down to weeding out a plethora of red herrings, and if you’re not sold on any of those … well, let’s just say the words “move it already” do come to mind).

I enjoyed the light, breezy tone of the narration, though, and as I said I can absolutely see myself picking up another book by Atwood Taylor; though preferably, I guess, oen with a female detective — or at least not quite as manner-laden a one as Asey.

The Appointment with Agatha group’s January 2022 book; a reread for me and a reminder how comparatively early in Christie’s career essentially her entire pantheon of recurring characters had come into being. Of course 14 years, all told, would not be anywhere near “early” in most every other writer’s career, but this is Christie we’re […]