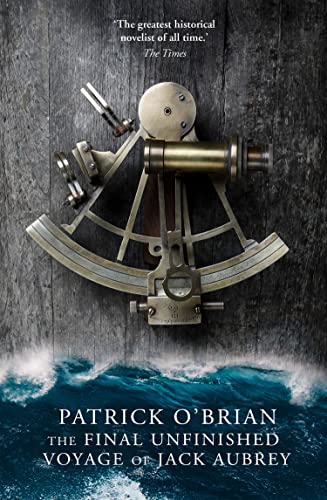 I love O’Brian’s Aubrey / Maturin series and raced through the whole 20 books at breakneck speed earlier this year, but by God, this particular  publication (I won’t even call it a “book”, because it isn’t) has to be one of the most blatant exercises in the exploitation of an author’s literary legacy under the sun.  Patrick O’Brian died when he wasn’t even halfway into this story — but instead of letting things rest, because this really is not anywhere near a completed novel, his publisher went and released the puny few initial chapters as a “book” in its own right.

My sincere advice to all newbie readers of the series: Spare yourselves the trouble of looking into this one; it’s not worth it — not for all the enjoyment of O’Brian’s writing.  Blue at the Mizzen, O’Brian’s last completed Aubrey / Maturin novel, has a very satisfying conclusion — content yourselves with that and just take it as read that “they lived happily ever after.”  Or, well, maybe not entirely happily as far as Stephen Maturin is concerned.  But then, he probably wouldn’t know what to do with himself if ever he were entirely happy; he’s just not that kind of person.  And Jack Aubrey couldn’t possibly be any happier than he is at the end of Blue at the Mizzen.