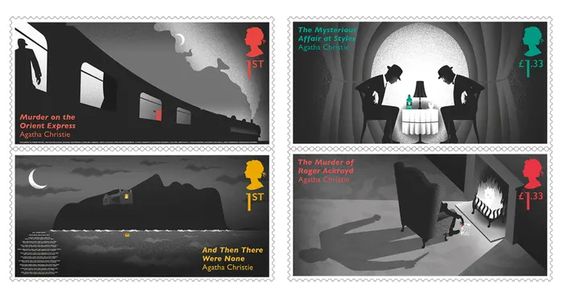 Little grey cells are set to be exercised up and down the country after the Royal Mail announced it would be releasing a series of Agatha Christie stamps packed with “hidden secrets” to mark what would have been the queen of crime’s 126th birthday on Thursday.

The six stamps are devoted to classic Christie mysteries, including her debut The Mysterious Affair at Styles, which Christie began writing 100 years ago at the age of 26, and another Hercule Poirot mystery, Murder on the Orient Express – appropriately enough a first class stamp. Each design includes microtext, UV ink and thermochromic ink. These concealed clues can be revealed using either a magnifying glass, UV light or body heat and and provide pointers to the mysteries’ solutions.

“With more than two billion book sales worldwide, crime writer and playwright Agatha Christie has been outsold only by Shakespeare and the Bible,” said the Royal Mail. “So it’s fitting that we mark not just the centenary of her writing her first crime novel, but also the 40th anniversary of her death with a stamp issue that’s full of intrigue.”

The series, designed by Jim Sutherland and Neil Webb, also includes the Miss Marple mysteries The Body in the Library and A Murder Is Announced, along with the Poirot tale The Murder of Roger Ackroyd, and the story of murder and mayhem on an island off the Devon coast adapted by the BBC last Christmas, And Then There Were None.

“I am delighted that, 100 years after she wrote her first detective novel, my grandmother’s works are being celebrated in such a unique way by Royal Mail,” said Christie’s grandson Mathew Prichard. “The ingenuity of her mysteries is cleverly represented in these distinctive designs, with the use of cutting edge technology – a welcome alliance of the traditional and the modern – adding to the delight. I am certain that … mystery lovers will relish the puzzles that each stamp presents.” 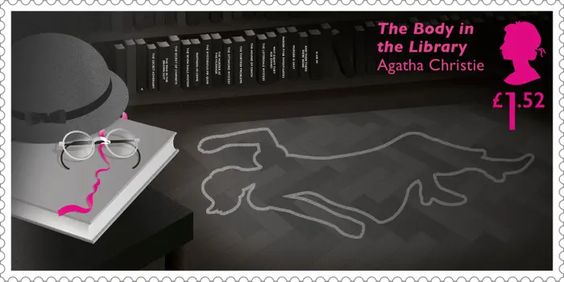