Michael Cox: The Meaning of Night 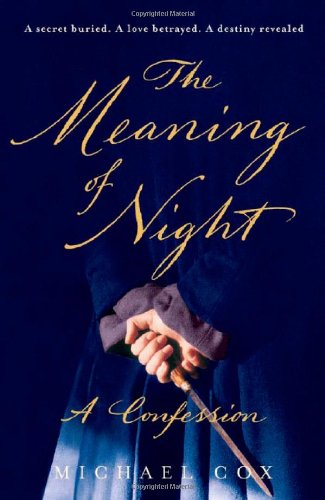 “For Death is the meaning of night, the eternal shadow into which all lives must fall, all hopes expire.”

Phoebus Rainsford Daunt, we learn from this book’s alleged editor (one J.J. Antrobus,* who claims to have discovered the collection of quarto-leaf pages making up the “confession” reproduced herein amidst a series of papers recently left to Cambridge University Library), was a 19th century poet who, though fashionable in life, quickly vanished into oblivion after his untimely demise one snowy 1854 December night. Under the glittering surface of the celebrated poet and man of society, however, Daunt was also – if this “confession”‘s author is to be believed – an unscrupulous villain who would stop at nothing to satisfy his near-unsatiable desires, and with whom death caught up as the ultimate retribution for a series of increasingly grave wrongs brought upon his erstwhile schoolfellow Edward Glyver a/k/a Glapthorn.

Told from the perspective of Daunt’s murderer – that same Edward Glyver – “The Meaning of Night” takes the reader into the world of Victorian England: from the “Great Leviathan,” as Glyver calls London, with its ale houses and opium dens, shady recesses and dark courtyards, the murky waters of the Thames, the splendor of Belgravia and the green expanse of Hyde Park, to the Channel coast’s windswept cliffs and beaches, then on to the hallowed halls of Eton and Cambridge, and finally to Evenwood, the Northamptonshire residence of Daunt’s patron Lord Tansor and symbol of Glyver’s own hopes and desires; a serene, Eden-like place of beauty, tranquility and … learning. For Evenwood also contains one of the country’s finest libraries of rare prints and manuscripts; and to Glyver, an incurable bibliophile who once harbored aspirations of an academic career, this in itself provides the place with an attraction every bit as strong as the charms exuded by its architecture, its setting and landscape, and by Emily Carteret (the daughter of Lord Tansor’s first cousin and secretary), with whom our narrator falls irredeemably in love.

In spinning his tale, author Michael Cox carefully avoids the pitfalls of a strictly chronological account, and the skillfully layered narrative tiers – Glyver’s “confession” itself, his oral accounts to select associates and confidants (as then detailed in the “confession”), various pieces of correspondence and diary entries, as well as a lengthy written deposition – greatly augment the story’s inherent tension. Thus, we don’t make Edward Glyver’s acquaintance in his childhood home of Sandchurch, Dorset, but rather in London, where the novel opens with the stunning declaration: “After killing the red-haired man, I took myself off to Quinn’s for an oyster supper.” Such a beginning must needs evoke overtones of Edgar Allan Poe (“The Tell-Tale Heart,” 1834); and indeed, like so many tales by the American master of horror, “The Meaning of Night” – which takes its title from a line from one of Daunt’s poems – is the story of one man’s descent into an obsession ultimately as destructive for himself as for his adversary: an adversary, moreover, whom we meet in person but fleetingly, which in turn again underscores our reluctance to place exclusive trust in Glyver’s judgment. Given that the latter even admits instantly that the “the red-haired man”‘s, a complete stranger’s killing was only a practice run for the murder of Daunt – and that we therefore anticipate that murder as his narration’s conclusion virtually from page one – it is all the more to Cox’s credit that he succeeds in maintaining the reader’s interest in and, despite all misgivings, sympathy for Glyver throughout, while also increasing the story’s tension until it reaches its dramatic finale.

Any novel embarking on a trip into 19th century England will court comparisons not only with Poe but, first and foremost, with Charles Dickens, whom Cox does acknowledge as a direct influence. And colorful characters such as Glyver and Daunt, Glyver’s employer Tredgold (Senior Partner at the lawfirm of Tredgold, Tredgold & Orr), Fordyce Jukes (head clerk at the aforementioned firm) and Josiah Pluckrose (a formidable representative of London’s underworld) could – names and all – easily populate the worlds of “Oliver Twist,” “David Copperfield,” or, for that matter, “Bleak House” or “Nicholas Nickelby.” But Dickens was a social reformer who actually walked the streets he described, whereas Cox – editor of several volumes of Victorian ghost and mystery stories – is necessarily guided by research and hindsight. And while his knowledge of the era is certainly vast, there are aspects which, to me, don’t quite ring true; particularly so, the transformation of Glyver’s friend Isabella Gallini from a well-bred, honorable young lady into a lady of pleasure: in Victorian society, with its inseparable link of female chastity and good repute, for a woman of Isabella’s background and learning the ultimate downfall; yet, suffered by her with way too good cheer and quick adaptability. For all of Cox’s knowledge of the writing world, this does seem to betray the first-time fiction author after all, as does the somewhat tentative execution of two extremely significant, epiphany-like moments, and the author’s occasional linguistic slips (“Riddle me this,” which modern-day moviegoers may recognize from “Batman Forever”) and unattributed quotes: While Shakespeare’s manifold epigrams (e.g., “A palpable hit” – Hamlet, V, 2) even in the 19th century had long passed into the collective conscience and an express attibution might arguably even have sounded jarring, I was a little surprised to find a book otherwise so scrupulous about these issues quoting Poe (“a dream within a dream,” 1827) – in the bibliophile narrator’s, Glyver’s voice, at that – without any acknowledgment.

This notwithstanding: It took the tragedy of Michael Cox’s having to undergo surgery for a cancer threateing his eyesight and his life to transform an unfinished manuscript begun thirty years earlier into a novel finally and deservedly now making its way into print. It is a pity the self-same cancer  could claim its victim before Cox had the opportunity to complete the trilogy begun with this book, and continued with “The Glass of Time” (set 20 years later).

* Allusion to the family allegorizing the history of the world in Thornton Wilder’s Skin of Our Teeth (1942)? Or to the J. Antrobus who authored several books on the interpretation of dreams published in the 1990s?