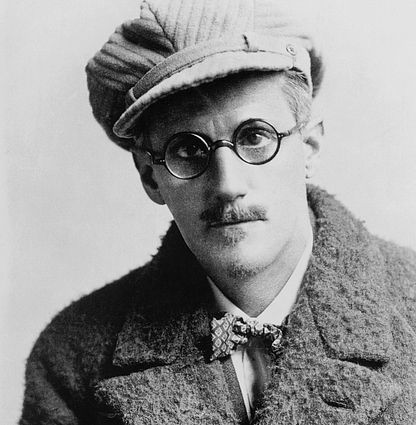 James Augusta Aloysius Joyce (Dublin, Ireland, February 2, 1882 – Zürich, Switzerland, January 13, 1941) was an Irish novelist and poet, considered to be one of the most influential writers in the modernist avant-garde of the early 20th century. Joyce is best known for Ulysses (1922), a landmark work in which the episodes of Homer’s Odyssey are paralleled in an array of contrasting literary styles, perhaps most prominent among these the stream of consciousness technique he perfected. Other major works are the short-story collection Dubliners (1914), and the novels A Portrait of the Artist as a Young Man (1916) and Finnegans Wake (1939). His complete œuvre also includes three books of poetry, a play, occasional journalism, and his published letters.

Joyce was born to a middle class family in Dublin, where he excelled as a student at the Jesuit schools Clongowes and Belvedere, then at University College Dublin. In his early twenties he emigrated permanently to continental Europe, living in Trieste, Paris and Zürich. Though most of his adult life was spent abroad, Joyce’s fictional universe does not extend far beyond Dublin, and is populated largely by characters who closely resemble family members, enemies and friends from his time there; Ulysses in particular is set with precision in the streets and alleyways of the city. Shortly after the publication of Ulysses he elucidated this preoccupation somewhat, saying, “For myself, I always write about Dublin, because if I can get to the heart of Dublin I can get to the heart of all the cities of the world. In the particular is contained the universal.”

Joyce’s work has been subject to intense scrutiny by scholars of all types. He has also been an important influence on writers and scholars as diverse as Samuel Beckett, Seán ó Ríordáin, Jorge Luis Borges, Flann O’Brien, Salman Rushdie, Robert Anton Wilson, John Updike, David Lodge and Joseph Campbell. Ulysses is considered the summation of the entire Modernist movement. – Joyce’s influence is also evident in fields other than literature. For example, the sentence “Three quarks for Muster Mark!” in Joyce’s Finnegans Wake is the source of the word “quark,” the name of one of the elementary particles, proposed by physicist Murray Gell-Mann in 1963. In 1999, Time Magazine named Joyce one of the 100 Most Important People of the 20th century, and stated; “Joyce … revolutionised 20th century fiction”. In 1998, the Modern Library, U.S. publisher of Joyce’s works, ranked Ulysses No. 1, A Portrait of the Artist as a Young Man No. 3, and Finnegans Wake No. 77, on its list of the 100 best English-language novels of the 20th century. The work and life of Joyce is celebrated annually on 16 June, Bloomsday, in Dublin and in an increasing number of cities worldwide.

“Oblige me by taking away that knife. I can’t look at the point of it. It reminds me of Roman history.”

“People could put up with being bitten by a wolf but what properly riled them was a bite from a sheep.”

“Think you’re escaping and run into yourself. Longest way round is the shortest way home.”

“I’d love to have the whole place swimming in roses”

Find more quotes by James Joyce on Wikiquote and Goodreads.