John Mortimer: Murderers and Other Friends 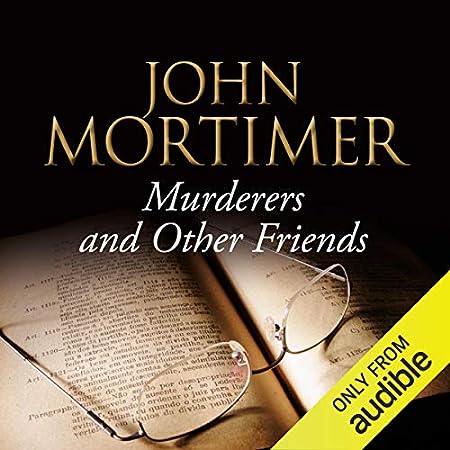 This book is the second part of Mortimer’s autobiography — or rather, his chapter-long essays on life, society, politics, the theatre and movie industry (with guest appearances by Gielgud, Olivier, Niven, Harrison, Guinness, and plenty of other luminaries), the law, justice (not the same thing at all), family, friendship, education, travel, and a whole host of other subjects, with autobiographical subtexts: in its general nature something akin to a bastard child of Montaigne and Shakespeare’s Dark Lady, educated in turn by Oscar Wilde, La Rochefoucauld, and Aristophanes.

I had originally picked this volume because its title suggested that it might make for suitable companion reading to Mortimer’s Rumpole series, which has long been a personal favorite; and while that is in part certainly the case, I got oh-so-much more than I had bargained for (while at the same time never feeling that I might more suitably have wanted to start with the first of Mortimer’s autobiographical titles, Clinging to the Wreckage; although that book and also the third and fourth volumes of Mortimer’s part-autobiographical ruminations, The Summer of a Dormouse and Where There’s a Will, have since been moved a few rungs higher on my TBR).  If you know your Rumpole (or your Titmuss), there is little in here on issues directly or indirectly related to the justice system, the practice of law, and politics (especially social politics) that will surprise you, though of course I did enjoy Mortimer’s insight into some of his more famous cases, and even more so, the less famous ones.  Either way: never fear, there is still going to be plenty here that you won’t have heard before, both in and (especially) out of court.  And it’s all immensely quotable; at times, I felt like marking and excerpting literally every other paragraph.  Mortimer has a playwright’s (and, well, an experienced barrister’s) sense and timing for the perfect punch line; but like in his fiction and dramatic writing, there is considerably more to the episodes he relates than merely a good joke — and yes, there is a definite point to this book’s title, too; not only as it relates to Mortimer’s many “other friends” (i.e., those who didn’t happen to be murderers).  In one of the book’s early chapters he writes:

“Beneath all the suave, assured, perhaps pompous, behaviour of advocates in murder cases there is a haunted insecurity, a dread of forgetting to ask a question, or worse still, asking too many and so destroying the future of the client in the dock, who is also giving a more or less convincing performance of quiet confidence and who has become, for the short period of the trial, your dependant and, in some strange way, your friend.

It’s not, I suppose, what you would call true friendship.  […]  The friendship only lasts for a short time, a few weeks or however long the trial takes.  When the trial is over, you say goodbye to them in the cells […] If you have shared a success, the relationship is also over and they will stare straight through you even though you meet again in the most respectable circumstances, on the terrace of the House of Commons, for example, or in the Crush Bar at Covent Garden.  They no longer depend on you, try to impress or even entertain you.  When they are out of danger they want to believe you never existed.  Those accused of murder are the best fair-weather, or rather ill-weather, friends.

What the defending counsel learns — a useful lesson when dealing with all types of friend — is to refrain from judgement.  There are plenty of people whose business it is to perform this unpleasant function: judges, juries and, perhaps, God.  The defender’s task is to listen and suspend disbelief.

Filson Young, writing in the Notable British Trials series about Dr Crippen, a murderer who impressed everyone with his politeness and modesty, said that it was ‘what we have in common with a criminal, rather than the subtle insanity which differentiates him from us, that makes us view with such lively interest a human being who has wandered into these tragic and fatal fields’.  The lively interest almost always falls short of understanding.  One of my greatest friends, at Oxford and for many years after, was a pacifist, a Greek scholar, a lover of Mozart and a country doctor.  He ended his life, after killing his mistress, by committing suicide.  I can only think of him as a friend, as a murderer I cannot understand him at all.”

And picking up on these initial thoughts, Mortimer concludes this book’s reminiscences:

“All fiction, all plays, all detective stories, all parables, all fairy stories, myths and religions, are our attempt to provide an explanation for the haphazard events of our lives, or at least impose some order on them.  We long for the logical patterns which poets and story-tellers provide so easily.  So, depending on the time and place of our birth, we may decide that this cruel world is some sort of obstacle course on the way to heaven, or that quarrels among the gods are responsible for wars and shipwrecks, or that God was born of a virgin and executed to redeem our sins; or that, far from being merciful, God has decreed the death sentence for blaspheming against Him and His holy works.

‘Literature is a luxury;’ said Chesterton, ‘fiction is a necessity.’  Fiction is our excuse to play God, to create characters and set them in motion, to make them act out, at our command, what we hope, or believe, is the truth about existence.  If only I were now writing a novel I could tie up all the loose ends of this book so that they pointed to a theme.  I could explain these random encounters by some analysis of my character which would turn me into a credible and consistent work of fiction.

I have not been writing a novel, although once you decide what to leave out, or how you feel about an event that happened, or how you would like the reader to see it, you are on your way to inventing a myth.  Politicians describing the economy, lawyers and judges describing a crime, every one of us re-inventing our pasts, are myth-makers to a greater or lesser degree.  Fiction is what comes naturally to us.

All the writer, deprived of fiction’s true freedom, can do is to try to remember, quite honestly, how things seemed at the time.  This is how I felt then about the murderers and friends; the murderers who might have been momentary friends, and the friends, on friend at least, who became a murderer.  It was not my business to reach a verdict on them and so there need be no summing-up.  Summing-ups in court are, in any event, thinly disguised attempts to persuade twelve honest citizens to agree with you.”

3 thoughts on “John Mortimer: Murderers and Other Friends”