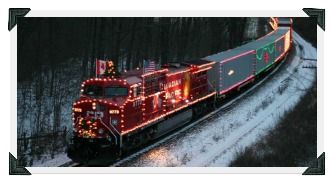 The Twelve Tasks of the Festive Season — Task the Eleventh: The Polar Express, Part 2
– Read a classic holiday book from your childhood (to a child if you have one handy).

Alas, I didn’t have a child handy, and Holly was singularly unimpressed, so I just settled down on my couch and read Andersen’s fairy tale of love conquering eternal ice all by myself!

The story also makes for very atmospheric visuals, of course …