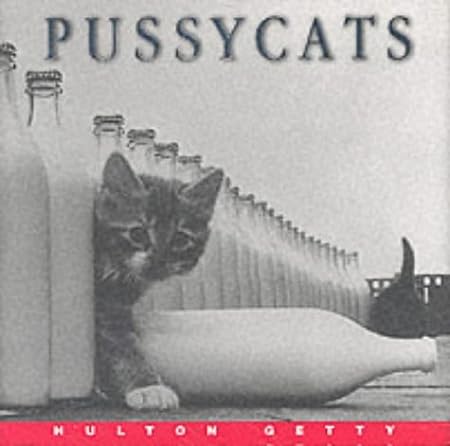 Looking for that perfect stocking stuffer for the cat lovers among your friends; or for that little extra on top of another gift? Look no further, I think you may have found it.

“Pussycats” is the cat-themed entry in the mini-picture book series from the Hallmark/Hulton Getty photograph collection (whose dog-themed entry is incidentally entitled, you guessed it, “Puppy Dogs”). But despite its title and although published by Hallmark, the photos compiled in this little book don’t have any of the saccharine flavor otherwise frequently associated with the products of that company. These are gorgeous black and white photographs, some from as early as the 1920s, others from the late 20th century, depicting cats in all manner of poses and situations. Some cats are shown with their famous owners, such as actors Oliver Reed, Ann Todd and James Mason, or (inter-)acting with human co-stars in a movie (like the cat held up by Anita Ekberg in a scene from “La Dolce Vita”) or in a commercial (like the 1980s’ cat food commercial star Arthur); but most of them are just doing what they do best – being cats. There’s the title photo kitten weaving his way through a row of milk bottles taller than himself, cats watching gold fish bowls, sitting next to a garden pond marked “no fishing,” and with their paws in creamers and their noses in cups and buckets full of fresh milk; looking out of briefcases, baskets, suitcases, windows (one next to a “no vacancy” sign!), out of post office shelves and, feline wet dream of wet dreams, a fridge; playing with toy mice and balls of wool; dozing on pillows, human laps and next to a birthday cake; tiny kittens not larger than the size of a hand; and a cat stopping traffic by walking across a busy street completely unconcerned by the cars. (That particular photo is from 1934 – I’m not sure a similar scene would still work out quite the same way now.) There are cats slurping milk out of the same saucer as a dog, tiny kittens standing between much larger dogs’ feet, and cats sharing the spotlight with children, ducklings and dolls. There’s the cat answering a 1930s’ model telephone (who but for the type of phone could almost be one of mine – I’m sure many a cat owner will recognize their feline loved ones in these photos) and, last but not least, the one trying to open a milk bottle with his teeth.

Each photo is juxtaposed with an aphorism or a quote from a famous cat lover; and often the combination of picture and text adds an extra touch of humor or poignancy. A picture of two cats greedily watching their food being cut up, for example, appears next to the English proverb “In a cat’s eyes, all things belong to cats;” and the photo from “La Dolce Vita” showing a fur-coated Anita Ekberg holding up a cat is set against Théophile Gautier’s quote: “The cat is a dilettante in fur.” And who could doubt Mark Twain’s statement that “[a] cat is more intelligent than people believe, and can be taught any crime” when looking at the picture of a cat rising on his hind legs for a big chunk of freshly caught fish? Who would dispute Rob Kopack, who said that “[i]f cats could talk, they would lie to you” when looking at the two cats sitting in a fridge; and who dare contradict Scottish writer Hector Hugh Munro’s (“Saki’s”) assertion that “[t]he cat is domestic only as far as it suits its own ends” when watching a cat being fed with a large wooden spoon by a pint-sized human kitchen helper at some point in the 1930s?

All photos are individually credited at the end of the book, but there is nothing else in the way of text or information: this is, as the subtitle aptly states, “a photographic celebration;” nothing more, nothing less. But it is a pure delight to leaf through, and will surely give great pleasure to any cat lover receiving it. And after all, that’s what cats are best at anyway, aren’t they?

“Dogs come when they’re called; cats take a message and get back to you later.” – Mary Bly.

“The smallest feline is a masterpiece.” – Leonardo da Vinci (attr.).