Gabriel García Márquez: El coronel no tiene quien le escriba (No One Writes to the Colonel, and Other Stories) 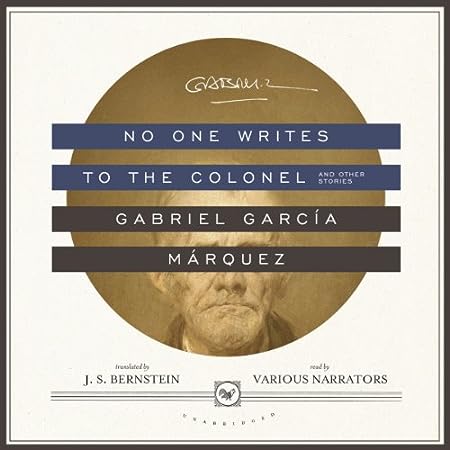 García Márquez’s writing, by and large, works better for me in his novels than in his short stories, and that turned out to be true in connection with this particular collection, too; even though its titular first entry is almost of novella-length: But this is a story where little moves — quite literally — and García Márquez devotes a lot of space to building atmosphere and setting, which really only works for me if coupled with an equally significantly “involved” plot of a novel (or a novella such as Crónica de una muerte anunciada (Chronicle of a Death Foretold), with its heart-stopping final sequence).

What initially comes across as a collection of unconnected tales is gradually revealed as events occurring in the same village (or at least region), and in the same universe as the author’s most famous novel, Cien años de soledad (One Hundred Years of Solitude), decades after the end of the civil war described there.  (Note: El coronel no tiene quien le escriba was actually published five years before Cien años de soledad, however.)  These are stories of little lives, set against the background of sun-drenched, dusty, forlorn desert settlements a hundred miles from nowhere in the middle of an unnamed South American country; the lives of the rural poor, to whom apparently minor incidents can be of monumental importance, but who on the other hand respond to major, life-changing catastrophes and reversals of fortune with the equanimity of the perpetually powerless (“Why bother to get worked up about something you cannot change anyway?”), going on with their lives as if nothing had happened, only making minor adjustments where they can — and who are nevertheless caught out by life in the end.  Taken together, they form a canvas that looks rough at first glance but turns out to be intricately-woven at closer inspection; whether you admire it as a deliberately limited, miniaturist masterpiece or (like me) ultimately would prefer to see it being put into a wider context is, I suppose, a matter of personal preference.