Task 3: The Chinese Lunar Calendar is based on cycles of the moon and the sun. Next year’s animal sign is the Sign of the Tiger, which means that babies born in 2022 are predicted to be “brave, competitive, unpredictable and confident.” What was the animal sign of your birth year? Let us know how it does, or does not, fit you.

Hah. Well, this turned out a tumble into not one but several rabbit holes. Or would that be dragons’ lairs?

Here’s what I knew going in:
I am born in a year of the dragon. Combining this with the five elements controlling each sign of the Chinese zodiac (gold / metal, wood, water, fire, and earth), I am born in a wood dragon year.

The dragon is the symbol of the Chinese state — formerly, it used to be the symbol of the Chinese emperor. Legend has it that the Hong Kong district of Kowloon (Gow Lung) owes its name to the visit of a Sung dynasty emperor who counted eight hills in the area and intended to name it “Eight Dragons” (based on the notion that there is a dragon sleeping under every hill and mountain), but a courtier pointed out that with the emperor present there were actually nine dragons there, so “Nine Dragons” it became (“lung” or “lóng” is “dragon” in Mandarin … or so I’m told).

So, that makes the dragon a symbol of power and good luck. There apparently still is a rush by Chinese parents to have their children be born in a year of the dragon (if one happens to be around the corner at the moment of their family planning), because people born in those years are supposed to be set on a lucky tragectory in life … unless, that is, if they are girls, because in a woman, all that is considered a positive trait in a man in China tends to be highly undesirable — strength of chracter and purpose most especially. As a matter of fact, “dragon ladies” are considered notoriously bad wives and often downright unmarriageable. Which is certainly true for me: I can’t even cotton onto the notion of marriage in a Western context — add on the Chinese expectations of wifely submissiveness and the whole concept becomes sheer torture.

Another thing that is true in my case is that wood dragons are considered not to be as gregarious and outgoing as your “typical” dragon — they are, or so Chinese astrologers say, more likely to be introverts. That certainly rings true with regard to the way I feel about society and people generally as well (present company excepted, of course).

Beyond the above, though, I didn’t remember a whole lot, so inspred by OB’s foray into what the internet has to say about her birth year — and at the risk of being spammed by “visit China” and astrology websites for the foreseeable future — I took a look at what else the web has to offer with regard to my auguries, Chinese zodiac version … and amusingly it turns out to be rather contradictory information, at least in parts. 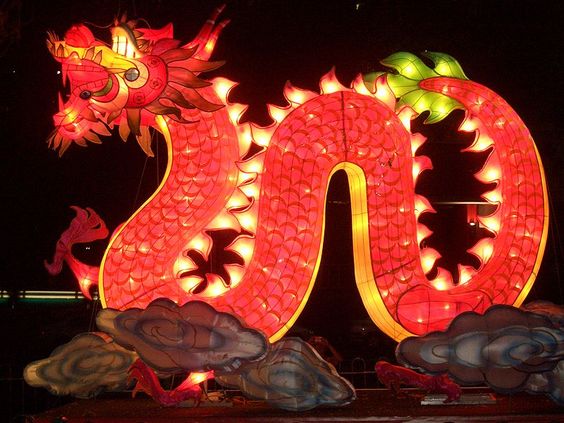 Here’s what I found out:
I’ll start with what I found on Wikipedia, some of which is actually rather interesting from a cultural / historical point of view, and I’m going to put the results gleaned from the other sources onto the next pages of this post. [Note: Most of the stuff from page 2 on is essentially a copy-and-paste job, with my editorial efforts limited to formatting.]

Wikipedia on the symbolism associated with wood in Chinese thinking:

In Chinese philosophy, wood (“wuxing” or “mù” — sometimes also translated as “tree”) is the growing of the matter, or the matter’s growing stage. Wood stands for springtime, the east, the planets Jupiter and Mercury, the color green, windy weather, and the Azure Dragon (Qing Lóng) in Four Symbols (see below). Blue and cyan-type colors also represent wood.

In Taoist thought, wood attributes are considered to be strength and flexibility, as seen, e.g., in bamboo. It is also associated with qualities of warmth, generosity, co-operation and idealism. A wood person is believed to be expansive, outgoing and socially conscious. (See what I meant about contradictory information?!) The wood element is one that seeks ways to grow and expand. Wood heralds the beginning of life, springtime and buds, sensuality and fecundity. (Hardly, in my case. My line of the family will end with me.) Wood needs moisture to thrive. (That is true insofar as I love water, and can’t envision living anywhere that doesn’t have a major body of water — river or ocean — nearby.)

In Chinese astrology, wood is included in the 10 heavenly stems (the above-mentioned five elements of gold / metal, wood, water, fire, and earthin their yin and yang forms), which combine with the 12 earthly branches (or Chinese signs of the zodiac), to form a 60 year cycle. Yang wood years end in four. Yin wood years end in five. 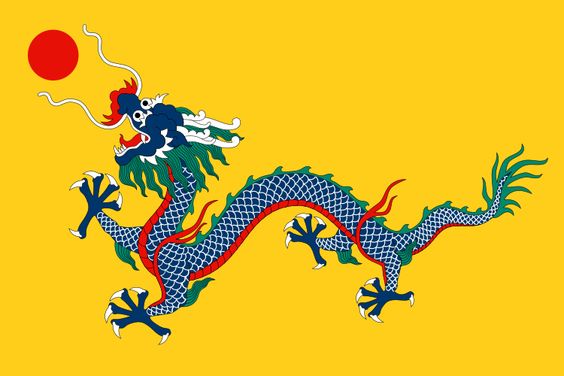 The Azure Dragon, as depicted on the national flag
of China during the Qing dynasty (1889-1912).
(Image source: Wikipedia)

The Azure Dragon or Qing Lóng is one of the Dragon Gods who represent the forces of the Five Forms of the Highest Deity (Wǔfāng Shàngdì): the fivefold manifestation of the supreme God of Heaven, representing Heaven’s cosmic activity which shapes the world.

The Azure Dragon is also one of the Four Symbols of the Chinese constellations, which in turn are the astral representations of the Wǔfāng Shàngdì; namely, the Azure Dragon, the Vermilion Bird, the White Tiger, and the Black Tortoise. The colors associated with these four creatures match the colors of soil in the corresponding areas of China: the bluish-grey water-logged soils of the east, the reddish iron-rich soils of the south, the whitish saline soils of the western deserts, and the black organic-rich soils of the north — as well as the yellow soils from the central loess plateau, which adds the Yellow Dragon, also the symbol of the Chinese emperor, to the aforementioned foursome as the fifth form of the Wǔfāng Shàngdi . The Han Chinese identify as the descendants of the red and yellow deities.

In the Chinese world order, the Azure Dragon thus represents the east and, at the same time, the spring season. He is also sometimes referred to as the Blue-green Dragon, the Green Dragon, the Avalon Dragon or the Blue Dragon (Cānglóng). His cardinal directionional epithet is that of the “Bluegreen Dragon of the East.”

In Japan, the Azure Dragon is one of the four guardian spirits of cities; most notably, he is believed to protect the erstwhile capital city of Kyoto on the east. Consistent with religious / mythological symbolism, the city’s west is believed to be protected by the White Tiger, the north by the Black Tortoise, the south by the Vermilion Bird, and the center by the Yellow Dragon. There are temples dedicated to each of these guardian spirits, with the Azure Dragon being represented in the Kiyomizu Temple in eastern Kyoto. Outside the entrance of the temple there is a statue of the dragon, which is said to drink from the waterfall within the temple complex at nighttime. Each year, a ceremony is held to worship the Dragon of the East.

A rare ancient record of the Four Guardians was discovered in 1983, in the 7th or 8th century AD Kitora Tomb in the village of Asuka (some 100 kms south-west of Nagoya), which had wall paintings depicting all four mythological guardians in their corresponding directions, as well as a system of the constellations on the ceiling. 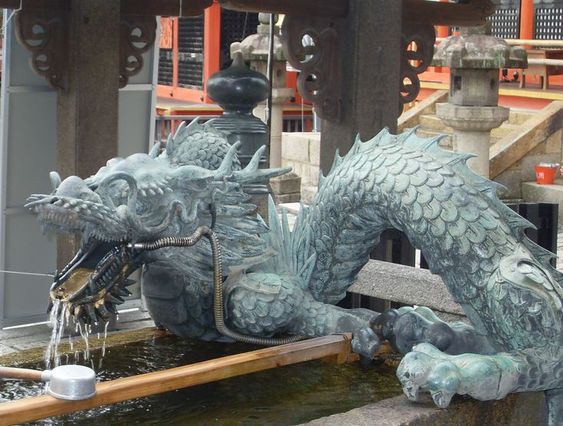 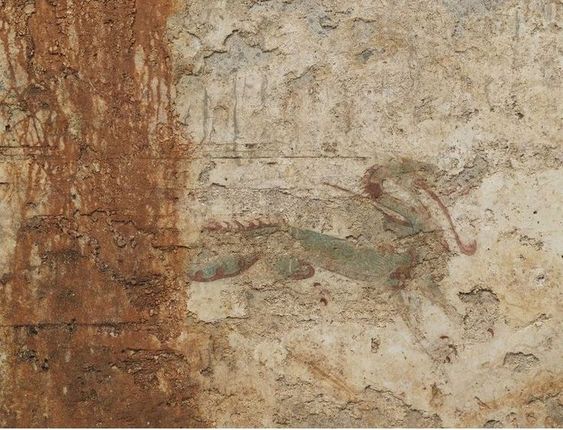 Depictions of the Azure Dragon at Kiyomizu Temple (Kyoto)
and as a wall painting [after restoration] from Kitora Tomb (Asuka), Japan
(image sources here and here)