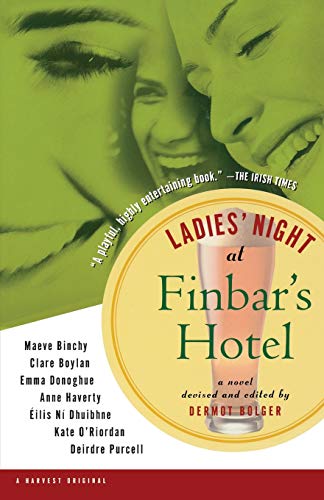 Chick Lit, or a Victim of Sequelitis?

An old adage says that some good things are better left alone – and I’ve certainly found this to be true here, because although this “Finbar” sequel was devised and edited by Dermot Bolger, who also oversaw the original project, I cared decidedly less for this book than I did for the first “Finbar” compilation.

The entries here strike me more or less as what is known as classic “chick lit”: there is, among others, a woman trying to get pregnant for the first time shortly before menopause without having to marry, a freshly liberated woman confronting the guy who suppressed her in a relationship years ago, and a mother reuniting with the son she gave up for adoption shortly after his birth out of wedlock. Alas, all of this has been done before, and in many instances better and with more original plotlines than here.

One characterization that does stand out among the rest, though, is that of a father who, in many respects at his wits’ end (even quite literally so), pays a last visit to his career-woman daughter in a desperate effort to retrace the steps of his life and find again what they both have lost. (Room 102: “Da Da Da – Daa.”) You might argue that as a type he, too, is an Irish cliché and in fact, would have been so long before Frank McCourt resurrected them in “Angela’s Ashes;” and I would not fight you over the issue. Worse yet, I found the daughter and her fashion world entourage to be so badly stereotyped that I was actually ready to slam the book shut a couple of times halfway through the story. Yet, something about the father truly touched me. – I also thought that this story and “The Debt Collector” (Room 103) had the only truly well-done endings in the book; most of the others either fizzled out rather half-heartedly or came to a sudden, abrupt and rather random stop.

Unfortunately, in this and also in other respects the obvious centerpiece of the book, “The Master Key” (Room 105) – the story which is designed to hold the book together in a similar fashion as does “The Night Manager” in the first “Finbar” book – is particularly disappointing. It is also the biggest offender as far as consistency with regard to the recurring characters and the hotel’s history are concerned; for example, the rather seedy and not at all respectable place of “Finbar I” is suddenly is described as a (still somewhat run-down, but essentially honorable) hotel for families and traveling salesmen right around the same time when “Finbar I” had clergy, cops and underworld converge in the hotel’s very own back rooms.

My overall favorite entry is the story taking place in the penthouse, “Tarzan’s Irish Rose,” which is charming in an offhand fashion while at the same time sporting a rather sarcastic tone. Stylistically well-done and driven by an emphatically drawn, quirky protagonist is also “The Wedding of the Pughs” (Room 106); but alas, this story, too fizzles at the end and left me thinking “What? That’s it?” Overall therefore, “Finbar II” unfortunately cannot sustain the high level set by the original “Finbar’s Hotel” collection. It is an only mildly entertaining compilation and very inconsistent; both as far as the quality of the writing is concerned as well as with respect to those elements of the contents that are supposed to hold the book together and provide a bridge to “Finbar I.”