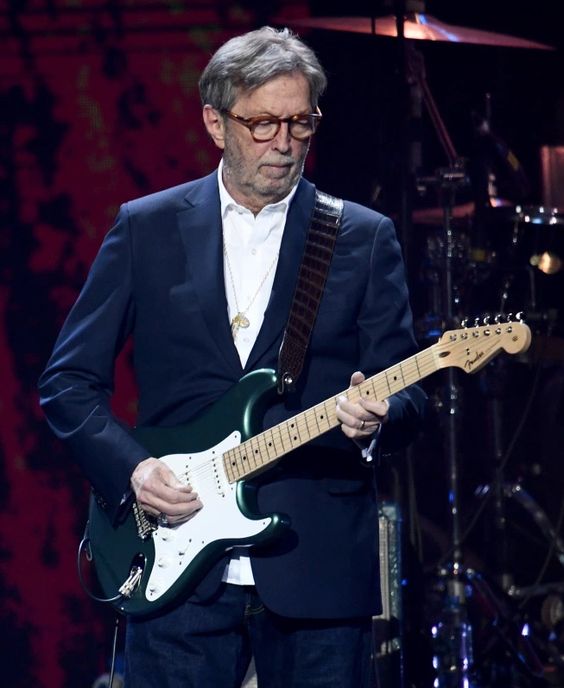 Eric Patrick Clapton, CBE, (born Ripley, England, March 30, 1945) is an English musician, singer, songwriter, and guitarist. He is the only three-time inductee to the Rock and Roll Hall of Fame: once as a solo artist, and separately as a member of the Yardbirds and Cream. Clapton has been referred to as one of the most important and influential guitarists of all time. Clapton ranked second in Rolling Stone magazine’s list of the “100 Greatest Guitarists of All Time” and fourth in Gibson’s “Top 50 Guitarists of All Time”.

In the mid-1960s, Clapton departed from the Yardbirds to play blues with John Mayall & the Bluesbreakers. In his one-year stay with Mayall, Clapton gained the nickname “Slowhand.” Immediately after leaving Mayall, Clapton joined Cream, a power trio with drummer Ginger Baker and bassist Jack Bruce in which Clapton played sustained blues improvisations and “arty, blues-based psychedelic pop.” For most of the 1970s, Clapton’s output bore the influence of the mellow style of J.J. Cale and the reggae of Bob Marley. His version of Marley’s I Shot the Sheriff helped reggae reach a mass market. Two of his most popular recordings were Layla, recorded by Derek and the Dominos, another band he formed, and Robert Johnson’s Crossroads, recorded by Cream. Following the death of his son Conor in 1991, Clapton’s grief was expressed in the song Tears in Heaven, which featured in his Unplugged album.

Clapton cites Freddie King, B.B. King, Albert King, Buddy Guy, and Hubert Sumlin as guitar playing influences but, overall, has named blues musician Robert Johnson as his single most important influence. In 2004 Clapton released CDs and DVDs entitled Sessions for Robert Johnson, featuring Clapton covering Robert Johnson songs using electric and acoustic guitars. Clapton also co-authored the book Discovering Robert Johnson, and in his liner notes to the 1990 release Robert Johnson, The Complete Collection he characterized Johnson as “… the most important blues musician who ever lived. He was true, absolutely, to his own vision, and as deep as I have gotten into the music over the last 30 years, I have never found anything more deeply soulful than Robert Johnson. His music remains the most powerful cry that I think you can find in the human voice, really. … it seemed to echo something I had always felt.”

Guitarists influenced by Clapton in turn include Slash, Allen Collins, Richie Sambora, Stevie Ray Vaughan, Gary Moore, Duane Allman, Derek Trucks, Eddie Van Halen, Brian May, Tony Iommi, Lenny Kravitz, Ted Nugent, Vince Gill, Brad Paisley, Joe Satriani, Joe Bonamassa, and Mark Knopfler. Clapton has received 18 Grammy Awards as well as the Brit Award for Outstanding Contribution to Music.  In 2004 he was awarded a CBE at Buckingham Palace for services to music.  He has received four Ivor Novello Awards from the British Academy of Songwriters, Composers and Authors, including the Lifetime Achievement Award. In his solo career, Clapton has sold more than 100 million records worldwide, making him one of the best-selling musicians of all time.  In 1998, Clapton, a recovering alcoholic and drug addict, founded the Crossroads Centre on Antigua, a medical facility for recovering substance abusers.

Jimmy Page and the Immediate All-Stars

Eric Clapton and the Powerhouse

Derek and the Dominos

Layla and Other Assorted Love Songs