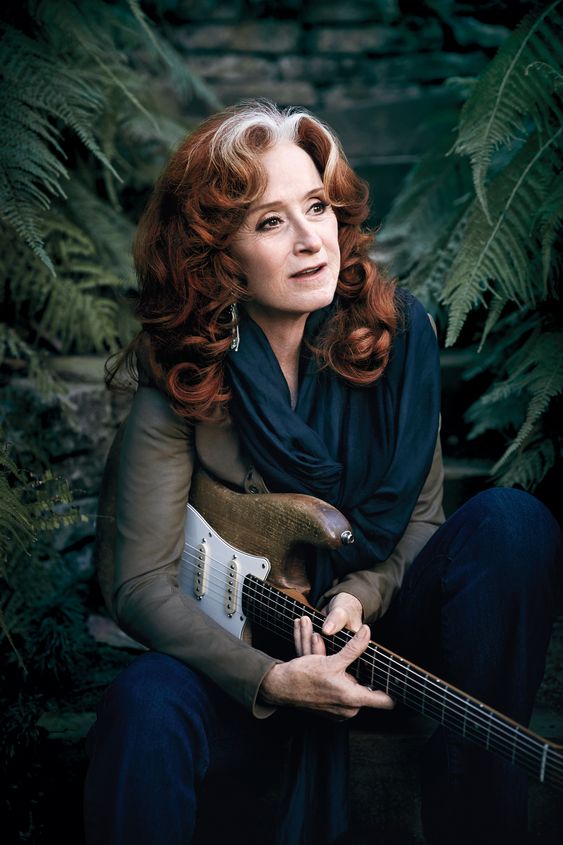 Bonnie Lynn Raitt (born Burbank, CA, USA, November 8, 1949) is an American blues singer-songwriter and slide guitar player. During the 1970s, Raitt released a series of acclaimed roots-influenced albums which incorporated elements of blues, rock, folk and country, but she is perhaps best known for her more commercially accessible recordings in the 1990s including Nick of Time, Something to Talk About, Love Sneakin’ Up on You, and the slow ballad I Can’t Make You Love Me (with Bruce Hornsby on piano).  Her principal touring guitar, which she has been playing at everyone of her appearances since 1969, is a customized Fender Stratocaster that she nicknamed Brownie. It became the basis for a signature model in 1996.  Raitt was the first female musician to receive a signature Fender line.

Raitt has received ten Grammy Awards in her career and is listed as number 50 in Rolling Stone’s list of the “100 Greatest Singers of All Time” and number 89 on the magazine’s list of the “100 Greatest Guitarists of All Time”. and is a lifelong political activist, supporting environmental and peace campaigns, as well as Little Kids Rock, a nonprofit organization that provides free musical instruments and free lessons to children in public schools throughout the U.S.A. Australian country music artist Graeme Connors said in a 2008 interview on ABC New South Wales that “Bonnie Raitt does something with a lyric no one else can do; she bends it and twists it right into your heart.”

Luck of the Draw

“No matter how you tell yourself
It’s what we all go through
Those lines are pretty hard to take
When they’re staring back at you
Oh, scared you’ll run out of time
When did the choices get so hard
With so much more at stake
Life gets mighty precious
When there’s less of it to waste”