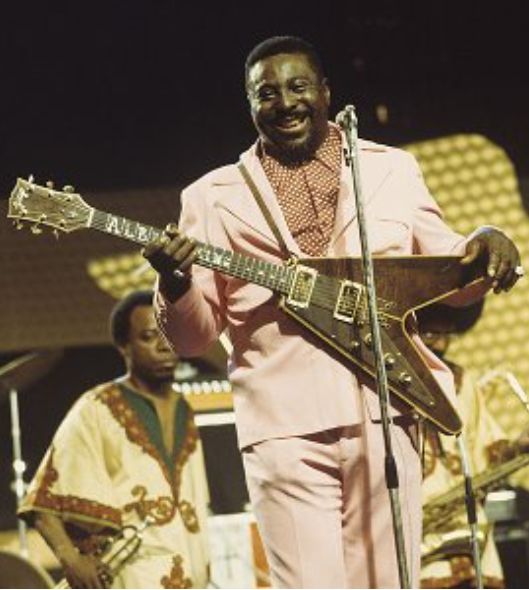 He began his professional work as a musician with a group called In The Groove Boys in Osceola, Arkansas. Moving north to Gary, Indiana and later St. Louis, Missouri, he briefly played drums for Jimmy Reed’s band and on several early Reed recordings. Influenced by blues musicians Blind Lemon Jefferson and Lonnie Johnson, the electric guitar became his signature instrument, his preference being a Gibson Flying V which he named “Lucy”. King earned his nickname “The Velvet Bulldozer” during this period as he drove one of them and also worked as a mechanic to make a living.

In 1966, King moved to Memphis, where he signed with the Stax record label. Produced by Al Jackson, Jr., King with Booker T. & the MGs recorded dozens of influential sides, such as Crosscut Saw and As The Years Go Passing By. In 1967 Stax released the album Born Under a Bad Sign, which was not technically a studio album, but a collection of all the singles King recorded at Stax. The title track of that album (written by Booker T. Jones and William Bell) became King’s best-known song and has been covered by many artists (from British rock group Cream, Paul Rodgers, Canadian guitarist Pat Travers, American rock guitarist Jimi Hendrix to cartoon character Homer Simpson). The production of the songs was sparse, clean, and maintained a traditional blues sound while also sounding fresh and thoroughly contemporary. Almost as important as King himself was the “menacing” bass of Donald Dunn, which at some points approached an early metal feel. Born Under A Bad Sign propelled Albert King to mainstream popularity at the comparatively late age of 44 and was one of the last albums recorded by an artist whose career began before the rock-and-roll era to be truly innovative, predictive of future music trends, and influential on young musicians of the era.

Another landmark album followed with Live Wire/Blues Power, from one of many dates King played at promoter Bill Graham’s Fillmore venues. It had a wide and long-term influence on Jimi Hendrix, Eric Clapton, Robbie Robertson, and later Gary Moore and Stevie Ray Vaughan. – In 1969, King performed live with the St. Louis Symphony Orchestra, and on June 6, 1970, he joined The Doors on stage at the Pacific Coliseum in Vancouver, Canada. He lent his distinctive guitar to blues cuts such as Little Red Rooster, Money, Rock Me and Who Do You Love.

In part motivated by a desire to remain relevant and on the charts, King eagerly embraced the new sound of funk that became popular in the early 1970s. He teamed up with members of The Bar-Kays and The Movement (Isaac Hayes’s backing group), including bassist James Alexander and drummer Willie Hall, adding strong funk elements to his music. Also adding strings and multiple rhythm guitarists, producers Allen Jones and Henry Bush created a wall of sound that significantly contrasted with the sparse, punchy records King had made previously. Among his new recordings was another one of King’s signature tunes-to-be, 1972’s I’ll Play the Blues For You. The new instrumental arrangements added a renewed freshness to King’s guitar licks; but the musical team work also worked well for The Bar-Kays, since funk was still a young genre and most such groups had yet to work with a first rate guitarist.

In 1975, King’s career took a turn downward when Stax Records filed for bankruptcy. After the disappointing results of his more mainstream, pop music efforts of the late 70s, released on the small Utopia label, King fully re-embraced his roots as a blues artist in the early 1980s and abandoned any arrangements except straight 12-bar guitar, bass, drums, and piano. In 1983, he finally cut a new live album with Fantasy Records, Crosscut Saw: Albert King In San Francisco.

By the late 1980s, King began to muse about retirement, as he had health problems. He continued regular tours and appearances at blues festivals, using a customized Greyhound tour bus with “I’ll Play The Blues For You” painted on the side. His final album, Red House – named after the Jimi Hendrix song – was recorded in 1992. King died on December 21, 1992 from a heart attack in his Memphis, Tennessee home. His final concert had been in Los Angeles two days earlier. He was given a funeral procession with the Memphis Horns playing When The Saints Go Marching In and buried in Edmondson, Arkansas near his childhood home. B.B. King eulogized him by stating “Albert wasn’t my brother in blood, but he was my brother in blues.” On December 11, 2012, it was announced that King would be posthumously inducted into the 2013 Rock and Roll Hall of Fame.

King’s first instrument was a diddley bow (a monochord zither of West African origin). Next, he built himself a cigar box guitar, before buying a Guild acoustic. The instrument he is usually associated with is his 1958 Gibson Flying V nicknamed “Lucy.” In 1974 he also began using a Flying V built by Dan Erlewine, and after 1980 another one built by Bradley Prokopow.

King influenced others such as Mick Taylor, Derek Trucks, Warren Haynes, Mike Bloomfield and Joe Walsh, who spoke at King’s funeral. He also had an impact on contemporaries Albert Collins and Otis Rush. He was often cited by Stevie Ray Vaughan as having been his greatest influence. Similarly, Eric Clapton has said that his work on the 1967 Cream hit Strange Brew and throughout the album Disraeli Gears was inspired by King.