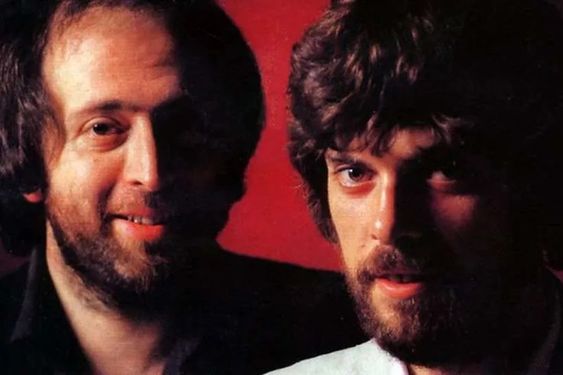 The Alan Parsons Project was a British progressive rock band, active between 1975 and 1990, consisting of singer Eric Woolfson and keyboardist Alan Parsons surrounded by a varying number of session musicians. Behind the revolving line-up and the regular sidemen, however, the true core of the Project was the duo of Parsons and Woolfson. Woolfson was a songwriter by profession, but also a composer and pianist. Parsons was a successful producer and accomplished engineer. Almost all songs on the band’s albums are credited to “Woolfson/Parsons”.

Alan Parsons met Eric Woolfson in the canteen of Abbey Road Studios in the summer of 1974. Parsons had already acted as assistant engineer on the Beatles’ Abbey Road and Let It Be, had recently engineered Pink Floyd’s The Dark Side of the Moon, and had produced several acts for EMI Records. Woolfson, a songwriter and composer, was working as a session pianist; he had also composed material for a concept album idea based on the work of Edgar Allan Poe.

Parsons asked Woolfson to become his manager and Woolfson managed Parsons’ career as a producer and engineer through a string of successes including Pilot, Steve Harley, Cockney Rebel, John Miles, Al Stewart, Ambrosia and The Hollies. Parsons commented at the time that he felt frustrated in having to accommodate the views of some of the musicians, which he felt interfered with his production. Woolfson came up with the idea of making an album based on developments in the film industry, where directors such as Alfred Hitchcock and Stanley Kubrick were the focal point of the film’s promotion, rather than individual film stars. If the film industry was becoming a director’s medium, Woolfson felt the music business might well become a producer’s medium.

Recalling his earlier Edgar Allan Poe material, Woolfson saw a way to combine his and Parsons’ respective talents. Parsons would produce and engineer songs written by the two, and the Alan Parsons Project was born. Their first album, Tales of Mystery and Imagination, including major contributions by all members of Pilot and Ambrosia, was a success, reaching the Top 40 in the US Billboard 200 chart. The song The Raven featured lead vocals by the actor Leonard Whiting, and, according to the 2007 remastered album liner notes, was the first rock song to use a digital vocoder, with Alan Parsons speaking lyrics through it.

Arista Records then signed The Alan Parsons Project for further albums. Through the late 1970s and early 1980s, the group’s popularity continued to grow (although they were always more popular in North America and Continental Europe than in their home country, never achieving a UK Top 40 single or Top 20 album). The singles I Wouldn’t Want to Be Like You, Games People Play, Damned If I Do, Time (Woolfson’s first lead vocal), Eye in the Sky and Don’t Answer Me had a notable impact on the Billboard Hot 100. After those successes, however, the group began to fade from view. There were fewer hit singles, and declining album sales. 1987’s Gaudi was the Project’s last release.

Tales of Mystery and Imagination was first remixed in 1987 for release on CD, and included narration by Orson Welles which had been recorded in 1975, but arrived too late to be included on the original album. On the 2007 deluxe edition release, it is revealed that parts of this tape were used for the 1976 Griffith Park Planetarium launch of the original album, the 1987 remix, and various radio spots, all of which were included as bonus material.

Most of the Project’s titles, especially the early work, share common traits (likely influenced by Pink Floyd’s The Dark Side of the Moon, on which Parsons was the audio engineer in 1973). They were concept albums, and typically began with an instrumental introduction which faded into the first song, often had an instrumental piece in the middle of the second LP side, and concluded with a quiet, melancholic, or powerful song. The opening instrumental was largely done away with by 1980; no later Project album except Eye in the Sky featured one (although every album includes at least one instrumental somewhere in the running order). The instrumental on that album, Sirius, eventually became the best-known (or at least most frequently heard) Parsons instrumental. It was used as entrance music by various American sports teams, most notably by the Chicago Bulls during their 1990s NBA dynasty.

The group was notable for using several vocal performers instead of having a single lead vocalist. Lead vocal duties were shared by guest vocalists chosen by their vocal style to complement each song. Woolfson sang lead on many of the group’s hits (including Time and Eye in the Sky) and the record company pressured Parsons to use him more, but Parsons preferred “real” singers, which Woolfson admitted he was not. Parsons himself only sang lead on one song (The Raven) through a vocoder, and can be heard singing backing vocals on a few others, including To One in Paradise. Both of those songs appeared on Tales of Mystery and Imagination. – Although the vocalists varied, a small number of musicians worked with the Alan Parsons Project regularly. These core musicians contributed to the recognisable style of a Project song in spite of the varied singer line-up. Together with Parsons and Woolfson, the Project originally consisted of the group Pilot, with Ian Bairnson (guitar), David Paton (bass) and Stuart Tosh (drums).

Except for one occasion, the Project never played live during its original incarnation. This was because Woolfson and Parsons saw themselves mainly in the roles of writing and production, and also because of the technical difficulties of reproducing on stage the complex instrumentation used in the studio. In the 1990s things changed with the technology of digital samplers. The one occasion where the band was introduced as “The Alan Parsons Project” in a live performance was at Night of the Proms 1990 (at the time of the group’s break-up), featuring all Project regulars except Woolfson who was present but behind the scenes, while Parsons stayed at the mixer except during the last song, where he played acoustic guitar.

Read more about The Alan Parsons Project on Wikipedia.

Eye in the Sky

The Turn of a Friendly Card

What goes up, must come down
What goes round, must come round
What’s been lost, must be found