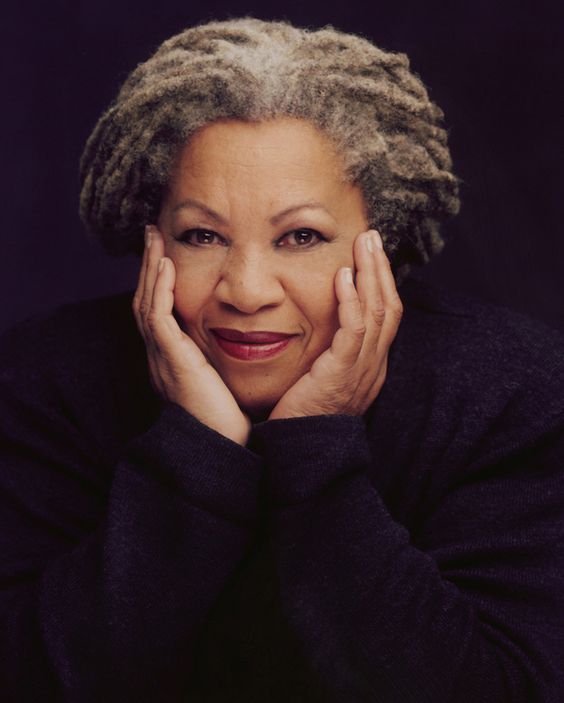 Born and raised in Lorain, Ohio, Morrison graduated from Howard University in 1953 with a B.A. in English. In 1955, she earned a master’s degree in American Literature from Cornell University. In 1957 she returned to Howard University, was married, and had two children before divorcing in 1964. In the late 1960s, she became the first black female editor in fiction at Random House in New York City. In the 1970s and 1980s, she developed her own reputation as an author, and her perhaps most celebrated work, Beloved, was made into a 1998 film. Her works are praised for addressing the harsh consequences of racism in the United States.

In 1996, the National Endowment for the Humanities selected her for the Jefferson Lecture, the U.S. federal government’s highest honor for achievement in the humanities. The very same year, she was honored with the National Book Foundation’s Medal of Distinguished Contribution to American Letters. On May 29, 2012, President Barack Obama presented Morrison with the Presidential Medal of Freedom. In 2016, she received the PEN/Saul Bellow Award for Achievement in American Fiction. In 2020, Morrison was inducted into the National Women’s Hall of Fame.

President of the United States

American Academy and Institute of Arts and Letters (USA)

National Endowment for the Humanities (USA)

Order of Arts and Letters (France)

“If there’s a book that you want to read, but it hasn’t been written yet, then you must write it.”

The Nobel Lecture In Literature, 1993

“Make up a story … For our sake and yours forget your name in the street; tell us what the world has been to you in the dark places and in the light. Don’t tell us what to believe, what to fear. Show us belief’s wide skirt and the stitch that unravels fear’s caul.”

“Anger … it’s a paralyzing emotion … you can’t get anything done. People sort of think it’s an interesting, passionate, and igniting feeling – I don’t think it’s any of that – it’s helpless … it’s absence of control – and I need all of my skills, all of the control, all of my powers … and anger doesn’t provide any of that – I have no use for it whatsoever.”

“All paradises, all utopias are designed by who is not there, by the people who are not allowed in.”

“You wanna fly, you got to give up the shit that weighs you down.”

“You can’t own a human being. You can’t lose what you don’t own. Suppose you did own him. Could you really love somebody who was absolutely nobody without you? You really want somebody like that? Somebody who falls apart when you walk out the door? You don’t, do you? And neither does he. You’re turning over your whole life to him. Your whole life, girl. And if it means so little to you that you can just give it away, hand it to him, then why should it mean any more to him? He can’t value you more than you value yourself.”

“It’s a bad word, ‘belong.’ Especially when you put it with somebody you love … You can’t own a human being.”

“Freeing yourself was one thing, claiming ownership of that freed self was another.”

“Definitions belong to the definers, not the defined.”

“Something that is loved is never lost.”

“In Ohio seasons are theatrical. Each one enters like a prima donna, convinced its performance is the reason the world has people in it.”

“When you gone to get married? You need to have some babies. It’ll settle you.’
‘I don’t want to make somebody else. I want to make myself.”

“The presence of evil was something to be first recognized, then dealt with, survived, outwitted, triumphed over.”

“She had been looking all along for a friend, and it took her a while to discover that a lover was not a comrade and could never be – for a woman. And that no one would ever be that version of herself which she sought to reach out to and touch with an ungloved hand. There was only her own mood and whim, and if that was all there was, she decided to turn the naked hand toward it, discover it and let others become as intimate with their own selves as she was.”

“Don’t let your mouth start nothing your ass can’t stand.”

“Sula never competed; she simply helped others define themselves.”

“Lonely was much better than alone.”

“We mistook violence for passion, indolence for leisure, and thought recklessness was freedom.”

Find more quotes by Toni Morrison on Wikiquote and Goodreads.