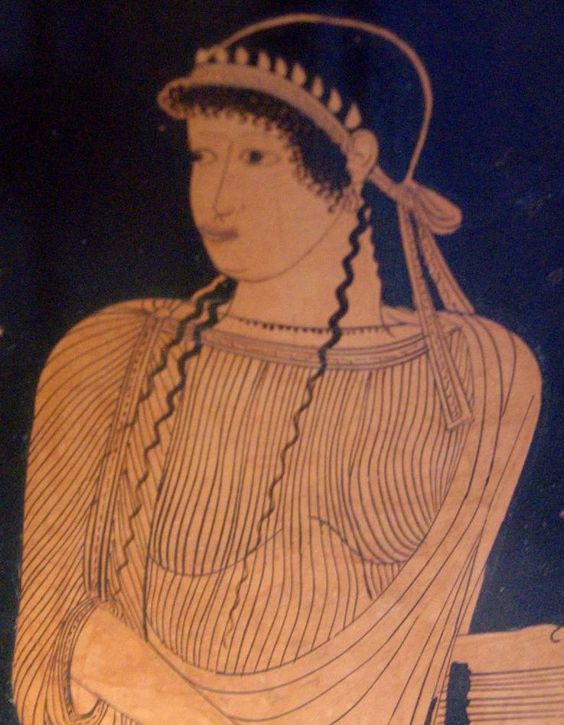 Sappho (Greek: Σαπφώ; Lesbos, Greece, ca. 630 – ca. 570 BC) was an Archaic Greek poet from the island of Lesbos.  Sappho is known for her lyric poetry, written to be sung while accompanied by a lyre.  In ancient times, Sappho was widely regarded as one of the greatest lyric poets and was given names such as the “Tenth Muse” and “The Poetess”. Most of Sappho’s poetry is now lost, and what is extant has mostly survived in fragmentary form; two notable exceptions are the Ode to Aphrodite and the Tithonus poem.  As well as lyric poetry, ancient commentators claimed that Sappho wrote elegiac and iambic poetry. Three epigrams attributed to Sappho are extant, but these are actually Hellenistic imitations of Sappho’s style.

Little is known of Sappho’s life. She was from a wealthy family from Lesbos, though her parents’ names are uncertain. Ancient sources say that she had three brothers; Charaxos (Χάραξος), Larichos (Λάριχος) and Eurygios (Εὐρύγιος); two of these brothers, Charaxos and Larichos, are mentioned in the poetess’s Brothers Poem, discovered in 2014. The Suda, a 10th century Byzantine encyclopedia of the Mediterranean world, mentions the names of all three brothers.  In full, the Suda enty reads:

“[Daughter] of Simon, though others [say] of Eumenos; others, of Eerigyos; others, of Ekrytos; others, of Semos; others, of Kamon; others, of Etarkhos; others, of Skamandronymos. Her mother was Kleis; [she was] a woman of Lesbos, from Eressos, a lyric poet, who was born in the 42nd Olympiad, when Alkaios also lived, and Stesikhoros, and Pittakos. She also had three brothers: Larikhos, Kharaxos, Eurygios. She was married to a most wealthy man, Kerkylas, who operated from Andros, and she had a daughter by him, who was named Kleis. There were three companions and friends of hers – Atthis, Telesippa, Megara – in respect of whom she incurred accusations of a shameful friendship / love. Her pupils were Anagora of Miletus, Gongyla of Kolophon and Euneika of Salamis. She wrote 9 books of lyric poems. And she first discovered the plectrum. She also wrote epigrams and elegiacs and iambics and monodies.”

Sappho was exiled to Sicily around 600 BCE, and may have continued to work until around 570. Legend links her to a Mitylenian ferryman named Phaon, who according to Greek mythology was transformed from an ugly old man into a beautiful youth by Aphrodite, as a reward for having ferried her to Asia Minor without asking for payment; there are, however, no known facts to substantiate that Sappho fell in love with Phaon and threw herself into the sea after having been rejected by him (not without having been taken to bed by him first).

Sappho was a prolific poet, who probably composed around 10,000 lines. Her poetry was well-known and greatly admired through much of antiquity, and she was among the canon of Nine Lyric Poets most highly esteemed by scholars of Hellenistic Alexandria; a list that also included the 5th century BC lyricists Simonides of Ceos and Pindar of Thebes, reputedly the greatest poets of their age. Sappho’s poetry is still considered extraordinary and her works continue to influence other writers. Beyond her poetry, she is well known as a symbol of love and desire between women, with the words “sapphic” and “lesbian” deriving from her name and the name of her home island, respectively.  Yet, while her importance as a poet is confirmed from the earliest times, interpretations of her work have widely been coloured and influenced by discussions of her sexuality.

Read more about Sappho on Wikipedia.

From If Not, Winter: Fragments of Sappho (transl. Anne Carson)

“Evening you gather back
all that dazzling dawn has put asunder:
you gather a lamb, gather a kid,
gather a child to its mother.”

“I want to say something but shame
prevents me

yet if you had a desire for good or beautiful things
and your tongue were not concocting some evil to say,
shame would not hold down your eyes
but rather you would speak about what is just”

“As sometimes at sunset the rosyfingered moon surpasses all the stars. And her light stretches over salt sea equally and flowerdeep fields.”

“[I was dreaming of you but]
just then
Dawn, in her golden sandals
[woke me]”

“Hesperus, you are
The most fetching star.
What Dawn flings afield
You bring back together –
Sheep to the fold, goats to the pen,
And the child to his mother again.

Nightingale,
All you sing
Is desire;
You are the crier
Of coming spring”

“To have beauty is to have only that,

but to have goodness
is to be beautiful
too”

Differing translations of the same fragment:

“someone will remember us
I say
even in another time”
– If Not, Winter: Fragments of Sappho (transl. Anne Carson)

“You may forget but
let me tell you
this: someone in
some future time
will think of us”
– The Art of Loving Women: the Poetry of Sappho (ed. J. Frederick Smith)

“I declare
That later on,
Even in an age unlike our own,
Someone will remember who we are.”
– Stung with Love: Poems and Fragments (transl. Aaron Poochigian; intro. Carol Ann Duffy)

“Wealth without virtue is no harmless neighbor.”
– Sappho, A Garland: The Poems and Fragments of Sappho (transl. Jim Powell)

“Wealth without real worthiness
Is no good for the neighbourhood;
But their proper mixture
Is the summit of beatitude.”
– Stung with Love: Poems and Fragments (transl. Aaron Poochigian; intro. Carol Ann Duffy)

Find more quotes by Sappho on Wikiquote and Goodreads.