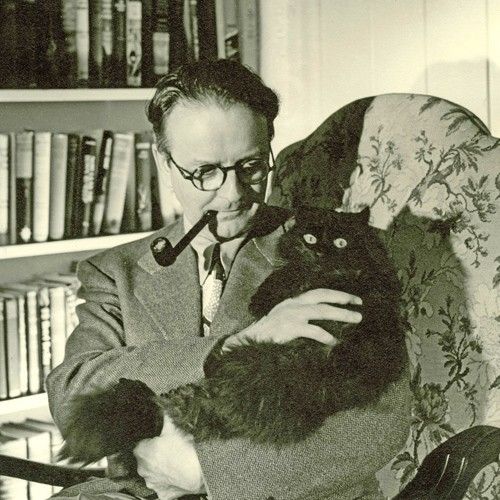 In 1932, at age forty-four, Raymond Chandler decided to become a detective fiction writer after losing his job as an oil company executive during the Depression. His first short story, Blackmailers Don’t Shoot, was published in 1933 in Black Mask, a popular pulp magazine. His first novel, The Big Sleep, was published in 1939. In addition to his short stories, Chandler published just seven full novels during his lifetime (though an eighth in progress at his death was completed by Robert B. Parker). All but Playback have been realized into motion pictures, some several times. In the year before he died, he was elected president of the Mystery Writers of America. He died on March 26, 1959, in La Jolla, California.

Chandler had an immense stylistic influence on American popular literature, and is considered by many to be a founder, along with Dashiell Hammett, James M. Cain and other Black Mask writers, of the hard-boiled school of detective fiction. His protagonist, Philip Marlowe, along with Hammett’s Sam Spade, is considered by some to be synonymous with “private detective,” both having been played on screen by Humphrey Bogart, whom many considered to be the quintessential Marlowe.

Some of Chandler’s novels are considered to be important literary works, and three are often considered to be masterpieces: Farewell, My Lovely (1940), The Little Sister (1949), and The Long Goodbye (1953). The Long Goodbye is praised within an anthology of American crime stories as “arguably the first book since Hammett’s The Glass Key, published more than twenty years earlier, to qualify as a serious and significant mainstream novel that just happened to possess elements of mystery”.

Essays, Articles, Letters, and Other Nonfiction

“There is no trap so deadly as the trap you set for yourself.”

“One would think a writer would be happy here – if a writer is every happy anywhere.”

“When I got home I mixed a stiff one and stood by the open window in the living room and sipped it and listened to the groundswell of traffic on Laurel Canyon Boulevard and looked at the glare of the big angry city hanging over the shoulder of the hills through which the boulevard had been cut. Far off the banshee wail of police or fire sirens rose and fell, never for very long completely silent. Twenty four hours a day somebody is running, somebody else is trying to catch him. Out there in the night of a thousand crimes, people were dying, being maimed, cut by flying glass, crushed against steering wheels or under heavy tires. People were being beaten, robbed, strangled, raped, and murdered. People were hungry, sick; bored, desperate with loneliness or remorse or fear, angry, cruel, feverish, shaken by sobs. A city no worse than others, a city rich and vigorous and full of pride, a city lost and beaten and full of emptiness. It all depends on where you sit and what your own private score is. I didn’t have one. I didn’t care. I finished the drink and went to bed.”

“Alcohol is like love,” he said. “The first kiss is magic, the second is intimate, the third is routine. After that you take the girl’s clothes off.”

“A check girl in peach-bloom Chinese pajamas came over to take my hat and disapprove of my clothes. She had eyes like strange sins.”

The Lady in the Lake

“She looked playful and eager, but not quite sure of herself, like a new kitten in a house where they don’t care much about kittens.”

“I hung up.
It was a step in the right direction, but it didn’t go far enough. I ought to have locked the door and hid under the desk.”

“Common sense is the guy who tells you that you ought to have had your brakes relined last week before you smashed a front end this week. Common sense is the Monday morning quarterback who could have won the ball game if he had been on the team. But he never is. He’s high up in the stands with a flask on his hip. Common sense is the little man in a grey suit who never makes a mistake in addition. But it’s always someone else’s money he’s adding up.”

The Simple Art of Murder

“Hammett gave murder back to the kind of people that commit it for reasons, not just to provide a corpse; and with the means at hand, not hand-wrought dueling pistols, curare and tropical fish.”

The Notebooks of Raymond Chandler

“There are two kinds of truth: the truth that lights the way and the truth that warms the heart. The first of these is science, and the second is art. Neither is independent of the other or more important than the other. Without art science would be as useless as a pair of high forceps in the hands of a plumber. Without science art would become a crude mess of folklore and emotional quackery. The truth of art keeps science from becoming inhuman, and the truth of science keeps art from becoming ridiculous.”
(Great Thought, February 19, 1938)

“[As a screenwriter] I have a sense of exile from thought, a nostalgia of the quiet room and balanced mind. I am a writer, and there comes a time when that which I write has to belong to me, has to be written alone and in silence, with no one looking over my shoulder, no one telling me a better way to write it. It doesn’t have to be great writing, it doesn’t even have to be terribly good. It just has to be mine.”
(A Qualified Farewell)

“The solution, once revealed, must seem to have been inevitable. At least half of all the mystery novels published violate this law.”
(Casual Notes on the Mystery Novel, 1949)

“The private detective of fiction is a fantastic creation who acts and speaks like a real man. He can be completely realistic in every sense but one, that one sense being that in life as we know it such a man would not be a private detective.”

Find more quotes by Raymond Chandler on Wikiquote and Goodreads.