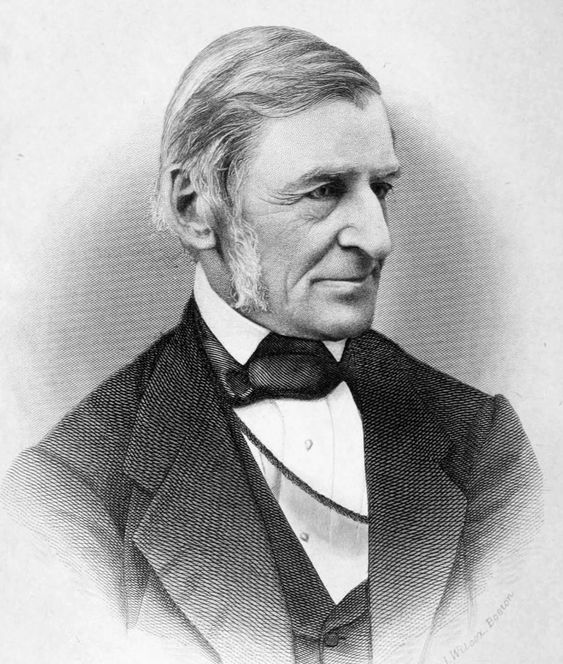 Ralph Waldo Emerson (Boston, MA, USA, May 25, 1803 – Concord, MA, USA, April 27, 1882) was an American essayist, lecturer, and poet, who led the Transcendentalist movement of the mid-19th century. He was seen as a champion of individualism and a prescient critic of the countervailing pressures of society, and he disseminated his thoughts through dozens of published essays and more than 1,500 public lectures across the United States.

Emerson gradually moved away from the religious and social beliefs of his contemporaries, formulating and expressing the philosophy of Transcendentalism in his 1836 essay, Nature. Following this ground-breaking work, he gave a speech entitled The American Scholar in 1837, which Oliver Wendell Holmes, Sr. considered to be America’s “Intellectual Declaration of Independence”.

Emerson wrote most of his important essays as lectures first, then revised them for print. His first two collections of essays – Essays: First Series and Essays: Second Series, published respectively in 1841 and 1844 – represent the core of his thinking, and include such well-known essays as Self-Reliance, The Over-Soul, Circles, The Poet and Experience. Together with Nature, these essays made the decade from the mid-1830s to the mid-1840s Emerson’s most fertile period.

Emerson wrote on a number of subjects, never espousing fixed philosophical tenets, but developing certain ideas such as individuality, freedom, the ability for humankind to realize almost anything, and the relationship between the soul and the surrounding world. Emerson’s “nature” was more philosophical than naturalistic: “Philosophically considered, the universe is composed of Nature and the Soul.”

His essays remain among the linchpins of American thinking, and his work has greatly influenced the thinkers, writers and poets that have followed him. When asked to sum up his work, he said his central doctrine was “the infinitude of the private man.” Emerson is also well known as a mentor and friend of fellow Transcendentalist Henry David Thoreau.

“Insist on yourself; never imitate. Your own gift you can present every moment with the cumulative force of a whole life’s cultivation; but of the adopted talent of another you have only an extemporaneous half possession. That which each can do best, none but his Maker can teach him.”

“Nothing is at last sacred but the integrity of your own mind.”

“Trust thyself: every heart vibrates to that iron string.”

“Men have looked away from themselves and at things so long that they have come to esteem the religious, learned and civil institutions as guards of property, and they deprecate assaults on these, because they feel them to be assaults on property. They measure their esteem of each other by what each has, and not by what each is.”

“I am ashamed to think how easily we capitulate to badges and names, to large societies and dead institutions.”

“When friendships are real, they are not glass threads or frost work, but the solidest things we can know.”

“A friend is a person with whom I may be sincere. Before him I may think aloud. I am arrived at last in the presence of a man so real and equal, that I may drop even those undermost garments of dissimulation, courtesy, and second thought, which men never put off, and may deal with him with the simplicity and wholeness with which one chemical atom meets another.”

Emerson in His Journals

“It is one of the blessings of old friends that you can afford to be stupid with them.”

“Some people will tell you there is a great deal of poetry and fine sentiment in a chest of tea.”

“The earth laughs in flowers.”

Write it on your heart

“Write it on your heart
that every day is the best day in the year.
He is rich who owns the day, and no one owns the day
who allows it to be invaded with fret and anxiety.
Finish every day and be done with it.
You have done what you could.
Some blunders and absurdities, no doubt crept in.
Forget them as soon as you can, tomorrow is a new day
begin it well and serenely, with too high a spirit
to be cumbered with your old nonsense.
This new day is too dear,
with its hopes and invitations,
to waste a moment on the yesterdays.”

“The glory of friendship is not the outstretched hand, not the kindly smile, nor the joy of companionship; it is the spiritual inspiration that comes to one when you discover that someone else believes in you and is willing to trust you with a friendship.”

“To be yourself in a world that is constantly trying to make you something else is the greatest accomplishment.”