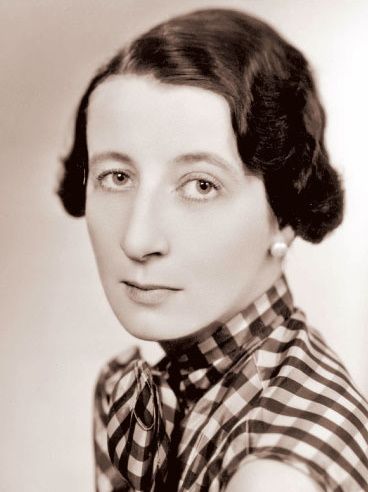 Josephine Tey (born Elizabeth MacKintosh, Inverness, Scotland, July 25, 1896 – London, England, February 13, 1952), a Scottish author. Her novel The Daughter of Time was a detective work investigating the role of Richard III of England in the death of the Princes in the Tower, and named as the greatest crime novel of all time by the Crime Writers’ Association.  Her earlier novel The Franchise Affair was 11th on the same list of 100 books.  Her first play Richard of Bordeaux, written under another pseudonym, Gordon Daviot, starred John Gielgud in its successful West End run.

Tey was educated at Inverness Royal Academy and, as from 1914, at Anstey Physical Training College in Erdington, a suburb of Birmingham. She taught physical training at various schools in England and Scotland and during her vacations worked at a convalescent home in Inverness as a Voluntary Aid Detachment nurse.  The curriculum for “physical training” included much more than athletics, and Tey later used her school experience in her 1946 novel Miss Pym Disposes when describing the subjects taught at the school, and the types of bruises and other injuries sustained by the pupils.  When she graduated, Tey worked in a physiotherapy clinic in Leeds, then taught in schools in Nottinghamshire and in Oban, where she was injured when a boom in the gymnasium fell on her face.  Tey repurposed this incident, too, in Miss Pym Disposes; this time as a murder method.

Her first published work appeared in The Westminster Gazette in 1925, under the name Gordon Daviot.  How she chose the first name Gordon is unknown, but Daviot was the name of a scenic locale near Inverness where she had spent many happy holidays with her family.  She continued publishing verse and short stories in The Westminster Review, The Glasgow Herald and the Literary Review.  Her first novel, Kif: An Unvarnished History (1929) — set against a military backdrop prominent in her home town Inverness and also published as by Gordon Daviot — was well received at the time with good reviews, a sale to America, and a mention in The Observer‘s list of Books of the Week.  Three months later, her first mystery novel, The Man in the Queue, was published (initially under the Gordon Daviot pseudonym, too), and was awarded the Dutton Mystery Prize when published in America.  This marks the first appearance of her detective, Inspector Alan Grant, although it would be some years before she wrote another mystery.

Tey’s real ambition had been to write a play which would receive a run in London’s West End. In this, she succeeded with Richard of Bordeaux, which was produced in 1932 at the Arts Theatre; again under the Daviot pseudonym, which she would continue to use for most of her plays.  The success of Richard of Bordeaux, a reimagination of the life of King Richard II — and a response to William Shakespeare’s treatment of the subject — was such that it transferred to the New Theatre (now the Noël Coward Theatre) in 1933, for a year-long run. The production made a household name of its young leading man and director, John Gielgud, who became MacKintosh’s life-long friend.  In The Daughter of Time, Tey writes of Inspector Alan Grant that “he had in his youth seen Richard of Bordeaux; four times he had seen it.”  Tey said that she was inspired by Gielgud’s performance in Hamlet and by the Royal Tournament.  Two more of her plays were produced at the New Theatre, The Laughing Woman (1934) and Queen of Scots (1934), the latter written in collaboration with Gielgud.  Tey went on to author a number of further full-length and one-act plays, many with biblical or historical themes, but none of these received notable success.  Only four of her plays were produced during her lifetime.  Her only non-fiction book, Claverhouse, — also published under the name Gordon Daviot — was intended as a vindication of John Graham of Claverhouse, 1st Viscount Dundee, whom she regarded as a libeled hero.

The author’s best-known books were her mysteries, all except for the first one (The Man in the Queue) written under the name of Josephine Tey, which was the name of her Suffolk great-great grandmother.  In five of these, the hero is Scotland Yard Inspector Alan Grant; in a sixth mystery, The Franchise Affair, he appears as a minor character.  Tey’s most famous mystery is The Daughter of Time (1951), in which Grant, laid up in hospital, has friends research reference books and contemporary documents so that he can puzzle out the mystery of whether King Richard III of England murdered his nephews, the Princes in the Tower. Grant comes to the firm conclusion that King Richard was totally innocent of the death of the princes.  Four years later, Tey also wrote a play, Dickon, intended to reestablish Richard III’s name and legacy, and to respond to Shakespeare’s play on the king’s life in a similar way as Richard of Bordeaux had responded to Shakespeare’s Richard II.  But it was chiefly her 1951 novel that reinvigorated the debate surrounding the historical truth of Richard III’s legacy, as well as inspiring later authors of historical fiction, such as Sharon Kay Penman, whose debut novel The Sunne in Splendour likewise contains a favorable portrayal of Richard III.

Tey’s novel The Franchise Affair also has a historical context: although set in the 1940s, it is based on the 18th-century case of Elizabeth Canning.  The Daughter of Time was the last of Tey’s books published during her lifetime. Her final work, a further crime novel, The Singing Sands, was found in her papers and published posthumously.  Proceeds from Tey’s estate, including royalties from her books, were assigned to the National Trust.

(With one exception, written under the name Gordon Daviot.)

The Daughter of Time

“It’s an odd thing but when you tell someone the true facts of a mythical tale they are indignant not with the teller but with you. They don’t want to have their ideas upset. It rouses some vague uneasiness in them, I think, and they resent it. So they reject it and refuse to think about it. If they were merely indifferent it would be natural and understandable. But it is much stronger than that, much more positive. They are annoyed.
Very odd, isn’t it.”

“The truth of anything at all doesn’t lie in someone’s account of it. It lies in all the small facts of the time. An advertisement in a paper, the sale of a house, the price of a ring.”

“Most people’s first books are their best anyways. It’s the one they wanted most to write.”

“A thousand people drowned in floods in China are news: a solitary child drowned in a pond is tragedy.”

“Next Christmas he was going to open this shabby sack of hers… and put something in the money compartment. She would fritter it away, of course, in small unimportances; so that in the end she would not know what she had done with it; but perhaps a series of small satisfactions scattered like sequins over the texture of everyday life was of greater worth than the academic satisfaction of owning a collection of fine objects at the back of a drawer.”

“It was shocking how little history remained with one after a good education.”

“There are far too many people born into the world, and far too many words written. Millions and millions of them pouring from the presses every minute. It’s a horrible thought.” “You sound constipated,” said The Midget.”

“Every schoolboy turned over the final page of Richard III with relief, because now at last the Wars of the Roses were over and they could get on to the Tudors, who were dull but easy to follow.”

“Did no one, any more, no one in all this wide world, change their record now and then? Was everyone nowadays thirled to a formula? Authors wrote so much to a pattern that their public expected it. The public talked about “a new Silas Weekly” or “a new Lavinia Fitch” exactly as they talked about “a new brick” or “a new hairbrush.” They never said “a new book by” whoever it might be. Their interest was not in the book but in its newness. They knew quite well what the book would be like.”

“Cromwell started that inverted snobbery from which we are all suffering today. ‘I’m a plain man, I am; no nonsense about me.’ And no manners, grace, or generosity, either.”

To Love and Be Wise

“One of the secrets of a successful life is to know how to be a little profitably crazy.”

“On an impulse he picked up the phone and asked for the London number.
‘One hour delay. Call you back,’ said the triumphant voice at the other end.
‘Priority,’ said Grant. And gave his credentials.
‘Oh,’ said the voice, disappointed but game. ‘Oh well, I’ll see what I can do.’
‘On the contrary,’ Grant said, ‘I’ll see what you can do,’ and hung up.”

“The trouble with you, dear, is that you think an angel of the Lord as a creature with wings, whereas he is probably a scruffy little man with a bowler hat.”

“She put her cup down and sighed again with pleasure. ‘I can’t think how the Nonconformists have failed to discover coffee.’
‘Discover it?’
‘Yes. As a snare. It does far more for one than drink. And yet no one preaches about it, or signs pledges about it. Five mouthfuls and the world looks rosy.'”

“Someone had said that if you thought about the unthinkable long enough it became quite reasonable.”

“That was the way with grief: it left you alone for months together until you thought that you were cured, and then without warning it blotted out the sunlight.”