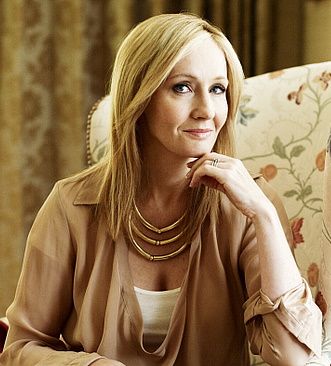 Joanne Rowling CH, OBE, HonFRSE, FRCPE, FRSL (born Yate, Gloucestershire, UK, July 31, 1965), better known by her pen name J.K. Rowling, is a British author, philanthropist, film producer, television producer, and screenwriter. She is best known for writing the Harry Potter fantasy series, which has won multiple awards and sold more than 500 million copies, becoming the best-selling book series in history. The books are the basis of a popular film series, with regard to which Rowling had overall approval on the scripts; she also was a producer of the final films. She also writes crime fiction under the pen name Robert Galbraith.

Born in Yate, Gloucestershire, Rowling was working as a researcher and bilingual secretary for Amnesty International in 1990 when she conceived the idea for the Harry Potter series while on a delayed train from Manchester to London. The seven-year period that followed saw the death of her mother, birth of her first child, divorce from her first husband, and relative poverty until the first novel in the series, Harry Potter and the Philosopher’s Stone, was published in 1997. There were six sequels, of which the last was released in 2007. Since then, Rowling has written several books for adult readers: The Casual Vacancy (2012) and – under the pseudonym Robert Galbraith – the crime fiction Cormoran Strike series. In 2020, her “political fairytale” for children, The Ickabog, was released in instalments in an online version.

Rowling has lived a “rags to riches” life in which she progressed from living on benefits to becoming a millionaire (according to a disputed claim by Forbes magazine, even the world’s first billionaire author), with UK sales in excess of £238 million, making her the best-selling living author in Britain.  The 2020 Sunday Times Rich List estimated Rowling’s fortune at £795 million, ranking her as the 178th richest person in the UK. Time magazine named her a runner-up for its 2007 Person of the Year, noting the social, moral, and political inspiration she has given her fans. Rowling was appointed a Member of the Order of the Companions of Honour (CH) in the 2017 Birthday Honours for services to literature and philanthropy. In October 2010, she was named the “Most Influential Woman in Britain” by leading magazine editors. Rowling has supported multiple charities, including Comic Relief, One Parent Families, and Multiple Sclerosis Society of Great Britain, as well as launching her own charity, Lumos. Since late 2019, Rowling has voiced controversial opinions on transgender people and related civil rights.

Harry Potter and the Sorcerer’s Stone

“It does not do to dwell on dreams and forget to live.”

“Call him Voldemort, Harry. Always use the proper name for things. Fear of a name increases fear of the thing itself.”

“‘One can never have enough socks,’ said Dumbledore. ‘Another Christmas has come and gone and I didn’t get a single pair. People will insist on giving me books.'”

“There are some things you can’t share without ending up liking each other, and knocking out a twelve-foot mountain troll is one of them.”

“The trouble is, humans do have a knack of choosing precisely those things that are worst for them.”

“‘That’s chess!’ snapped Ron. ‘You’ve got to make some sacrifices!'”

“At half past eight, Mr. Dursley picked up his briefcase, pecked Mrs. Dursley on the cheek, and tried to kiss Dudley good-bye but missed, because Dudley was now having a tantrum and throwing his cereal at the walls. ‘Little tyke,’ chortled Mr. Dursley as he left the house. He got into his car and backed out of number four’s drive.”

“It was on the corner of the street that he noticed the first sign of something peculiar – a cat reading a map. For a second, Mr Dursley didn’t realize what he had seen – then he jerked his head around to look again. There was a tabby cat standing on the corner of Privet Drive, but there wasn’t a map in sight. What could he have been thinking of? It must have been a trick of the light. Mr Dursley blinked and stared at the cat. It stared back. As Mr Dursley drove around the corner and up the road, he watched the cat in his mirror. It was now reading the sign that said Privet Drive – no, looking at the sign; cats couldn’t read maps or signs. MrDursley gave himself a little shake and put the cat out of his mind.”

Harry Potter and the Chamber of Secrets

“It is our choices, Harry, that show what we truly are, far more than our abilities.”

“Honestly, if you were any slower, you’d be going backward.”

“‘Ginny!’ said Mr. Weasley, flabbergasted. ‘Haven’t I taught you anything? What have I always told you? Never trust anything that can think for itself if you can’t see where it keeps its brain?'”

“‘Well, you’re expelling us aren’t you?’ said Ron.
‘Not today, Mr. Weasley.’
Snape looked as though Christmas had been canceled.”

“‘Your aunt and uncle will be proud, though, won’t they?’ said Hermione as they got off the train and joined the crowd thronging toward the enchanted barrier. ‘When they hear what you did this year?’
‘Proud?’ said Harry. ‘Are you crazy? All those times I could’ve died, and I didn’t manage it? They’ll be furious …'”

“Hearing voices no one else can hear isn’t a good sign, even in the wizarding world.”

“If he doesn’t stop trying to save your life he’s going to kill you.”

“‘Beds empty! No note! Car gone – could have crashed – out of my mind with worry – did you care? – never, as long as I’ve lived – you wait until your father gets home, we never had trouble like this from Bill or Charlie or Percy – ‘
‘Perfect Percy,’ muttered Fred.
‘YOU COULD DO WITH TAKING A LEAF OUT OF PERCY’S BOOK!’ yelled Mrs. Weasley, prodding a finger in Fred’s chest. ‘You could have died, you could have been seen, you could have lost your father his job – ‘
It seemed to go on for hours. Mrs. Weasley had shouted herself hoarse before she turned on Harry, who backed away.
‘I’m very pleased to see you, Harry, dear,’ she said.”

“What exactly is the function of a rubber duck?”

Harry Potter and the Prisoner of Azkaban

“I solemnly swear that I am up to no good.”

“Happiness can be found, even in the darkest of times, if one only remembers to turn on the light.”

“Don’t let the muggles get you down.”

“You think the dead we loved truly ever leave us? You think that we don’t recall them more clearly in times of great trouble?”

“I want to commit the murder I was imprisoned for.”

“‘I dreamed I was buying new shoes last night,’ said Ron. ‘What d’ya think that’s gonna mean?’
‘Probably that you’re going to be eaten by a giant marshmallow or something,’ said Harry.”

“‘I’m not going to be murdered,’ Harry said out loud.
‘That’s the spirit, dear,’ said his mirror sleepily.”

“Bad news, Harry. I’ve just been to see Professor McGonagall about the Firebolt. She – er, got a bit shirty with me. Told me I’d got my priorities wrong. Seemed to think I cared more about winning the Cup than I do about staying alive. Just because I told her I didn’t care if it threw you off, as long as you caught the Snitch first.”

“Why, dear boy, we don’t send wizards to Azkaban just for blowing up their aunts.”

“‘I’ll fix it up with Mum and Dad, then I’ll call you. I know how to use a fellytone now – ‘
‘A telephone, Ron,’ said Hermione. ‘Honestly, you should take Muggle Studies next year …'”

“Professor Kettleburn, our Care of Magical Creatures teacher, retired at the end of last year in order to enjoy more time with his remaining limbs.”

Harry Potter and the Goblet of Fire

“If you want to know what a man’s like, take a good look at how he treats his inferiors, not his equals.”

“It matters not what someone is born, but what they grow to be.”

“Numbing the pain for a while will make it worse when you finally feel it.”

“Percy wouldn’t notice a joke if it danced naked in front of him wearing one of Dobby’s hats.”

“Understanding is the first step to acceptance, and only with acceptance can there be recovery.”

Harry Potter and the Order of the Phoenix

“Indifference and neglect often do much more damage than outright dislike.”

“Things we lose have a way of coming back to us in the end, if not always in the way we expect.”

“Yeah, Quirrell was a great teacher. There was just that minor drawback of him having Lord Voldemort sticking out of the back of his head!”

Harry Potter and the Half-Blood Prince

“It is the unknown we fear when we look upon death and darkness, nothing more.”

“[P]eople find it far easier to forgive others for being wrong than being right.”

“It was, he thought, the difference between being dragged into the arena to face a battle to the death and walking into the arena with your head held high. Some people, perhaps, would say that there was little to choose between the two ways, but Dumbledore knew – and so do I, thought Harry, with a rush of fierce pride, and so did my parents – that there was all the difference in the world.”

Harry Potter and the Deathly Hallows

“Of course it is happening inside your head, Harry, but why on earth should that mean that it is not real?”

“We’re all human, aren’t we? Every human life is worth the same, and worth saving.”

“He can run faster than Severus Snape confronted with shampoo.”

“Autumn seemed to arrive suddenly that year. The morning of the first September was crisp and golden as an apple.”

Find more quotes by J.K. Rowling on Wikiquote and Goodreads.