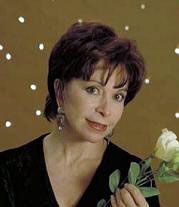 Isabel Allende (born Lima, Peru, August 2, 1942) is a Chilean writer; the daughter of Tomás Allende, a first cousin of Salvador Allende (President of Chile from 1970 to 1973), who at the time of her birth was the Chilean ambassador to Peru. When, after the CIA-backed military coup in September 1973 that brought Augusto Pinochet to power, Allende eventually found her name added to the government’s list of wanted persons, , she fled to Venezuela, where she stayed for 13 years.

When in exile in 1981 she received a phone call that her 99-year-old grandfather was near death, she sat down to write him a letter and thereby “keep him alive, at least in spirit.” The letter evolved into the manuscript for the novel The House of the Spirits (La casa de los espíritus), whose intent was also to exorcise the ghosts of the Pinochet dictatorship. The book was rejected by numerous Latin American publishers, but finally published in Spain. It soon exceeded two dozen editions in Spanish, was translated into a score of other languages, and was successfully adapted for the screen in 1993 by Danish director Bille August in a movie starring Jeremy Irons, Meryl Streep, Winona Ryder, Glenn Close and Antonio Banderas.

Allende has been compared to Gabriel García Márquez as an author of the style known as magical realism. Her books are known for their vivid storytelling, and she is also famous for commercially successful novels such as Of Love and Shadows (De amor y de sombra, 1985) Eva Luna (1987), City of the Beasts (La ciudad de las bestias, 2002) and Zorro (2005). Allende’s book Paula (1995) is a memoir of her childhood in Santiago, Chile, and the following years that she spent in exile. It is written as an anguished letter to her daughter, who suffered from porphyria, a metabolic disorder that, under normal circumstances, is rarely fatal. In 1991, however, an error in medication resulted in severe brain damage and left Paula in a persistent vegetative state. After several months at Paula’s bedside, Allende learned that the hospital mishap had caused irreversible brain damage. Allende had her daughter moved to a hospital in California, where she died on December 6, 1992. Paula, as much a celebration of Allende’s turbulent life as the chronicle of Paula’s death, likewise became a best seller in the United States, Latin America and Europe.

Today, Allende is one of the world’s most widely read Spanish-language authors. Her novels have been translated into over 30 languages and sold more than 56 million copies. In addition to The House of the Spirits, there are several other movies based on her novels, including Aphrodite, Eva Luna and Gift for a Sweetheart (based on a story from The Stories of Eva Luna). In 2004, Allende was inducted into the American Academy of Arts and Letters, and in 2010, she received Chile’s National Literature Prize.

Allende’s novels are often based upon her personal experience and pay homage to the lives of women, while weaving together elements of myth and realism. She has lectured and toured many American colleges to teach literature. Fluent in English as a second language, Allende was granted American citizenship in 2003, having lived in California with her American husband since 1989.

The House of the Spirits

“You can’t find someone who doesn’t want to be found.”

Inés of My Soul

“Memory is fiction. We select the brightest and the darkest, ignoring what we are ashamed of, and so embroider the broad tapestry of our lives.”

“Be careful what you ask of Heaven; it might be granted.”

The Sum of Our Days: A Memoir

“Fear is inevitable, I have to accept that, but I cannot allow it to paralyze me.”

Find more quotes by Isabel Allende on Wikiquote and Goodreads.